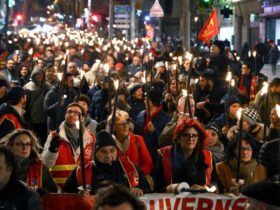 France strikes: Workers walk out in mass protests against plans to raise the retirement age

(CNN) — Summer’s nearly officially over and that means the season’s air travel crush — and hopefully the chaos — is set to subside.

The flight cancellation rate for the Labor Day holiday weekend was 0.6%, a substantial drop from the summer average of 2.2% from Memorial Day weekend in late May through September 1, according to data from flight tracking site FlightAware.

Put that down to a variety of factors, says FlightAware’s Kathleen Bangs, including excellent weather — for the most part — across the US.

“But credit also goes to the airlines for increasing their staffing over the summer,” said Bangs, a former airline pilot and spokesperson for FlightAware.

The smooth performance came on a weekend where the number of passengers screened at US Transportation Security Administration checkpoints exceeded 2019 passenger volumes for the first time over a holiday weekend since the pandemic began.

Is the weekend a harbinger of lower levels of disruption to come?

Fall — toward the end of September, and especially October — “is the sweet spot for airlines as weather delays and cancellations should be minimized in this upcoming shoulder season before winter,” Bangs said via email, with the caveat that a hurricane would mean “all bets are off.”

While hopes are high for smoother skies ahead, there’s no denying that summer air travel has been a mess in the US and around the world.

So which airports ultimately fared the worst this summer in terms of the percentages of flights delayed and canceled?

Here’s how things shook out in the United States and globally (based on FlightAware data from May 27 through September 5):

Worst US airports for delays and cancellations this summer

All of the US airports with the highest percentages of arrival delays saw a quarter or more of their flights this summer delayed, with Chicago Midway logging nearly 38% delayed.

New York area airports also struggled with delays, with JFK and Newark in the top 10, as did Orlando International Airport in Florida. Airlines had their share of operational struggles, and New York and Florida were frequently cited by airline executives as spots affected by air traffic controller staffing issues as well.

Here are the US airports with the highest percentages of flights delayed:

New York area airports also had high cancellation rates this summer, with Newark and LaGuardia leading the way with nearly 7% of their flights canceled over the course of the summer travel season between Memorial Day weekend and Labor Day.

Here are the US airports with the highest percentages of flights canceled:

Passengers in Toronto Pearson International Airport on July 22, 2022. More than half of arrivals were delayed at the airport this summer.

Worst airports around the world for delays and cancellations this summer

Looking more broadly at airports around the world, Canada stands out for massive delays this summer. About half of arrivals were delayed at two of its largest airports — Toronto Pearson and Montreal-Trudeau. More than a third of flights at Vancouver’s airport were also delayed.

Air Canada rolled out a policy allowing airport and itinerary changes this summer specifically to address “longer than usual delays” at Toronto Pearson.

Airports in European travel hubs — Frankfurt, London and Paris, among others — were also plagued with delays during the period from late May through early September.

Here are the airports with the highest percentages of flights delayed around the world:

A huge chunk of this summer’s flight cancellations happened in China.

Ongoing travel restrictions and snap lockdowns have put a huge damper on travel in China, and a strict Covid-containment policy has kept the country closed to most international travel since the pandemic began.

Still, Newark and LaGuardia made the global list for cancellations, at Nos. 9 and 10.

Here are the airports with the highest percentages of flights canceled around the world: