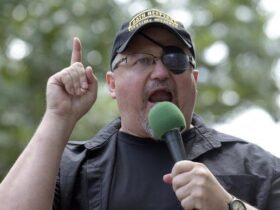 Testimony: Oath Keepers Ready to Use ‘Any Means Necessary’

Arsenal will not get carried away by derby drubbing

Two games into a new season is no time to try and determine the destination of the Women’s Super League title, or who is on track for a Champions League spot. Arsenal will be aware of this and the need to take things game by game having begun last season with a 3-2 win over Chelsea before being pipped to the title by the same team by a single point. So while Arsenal’s 4-0 defeat of Tottenham on Saturday was comprehensive and slick, Jonas Eidevall and his team will not get carried away, especially given how poor the visitors were in front of a record WSL crowd of 47,367. “We didn’t play our game as well as we could have,” said Tottenham’s head coach, Rehanne Skinner. “We were too tentative in the press and that created challenges for us on the ball.” Suzanne Wrack

Villa’s signings give them a new lease of life

Aston Villa’s 2-0 victory at Leicester on Sunday was a history-making moment for the club given it secured them back-to-back wins in the WSL for the first time. New signings have revitalised Carla Ward’s team, none more so than Rachel Daly, whose early penalty was her third goal of the season as she continues to build on her excellent performances for England at the European Championship. Emily Gielnik then struck four minutes from time to extinguish any chance of a Leicester comeback. Only eight points separated these two sides last year and while the Foxes have lingering defensive issues, Villa march onwards and upwards with a squad that now looks ready to take on anyone. Renuka Odedra

Manchester United have some heavyweight names in their squad, the likes of Ella Toone, Katie Zelem and Alessia Russo, but it was two lesser-profile players who shone in their 2-0 victory over West Ham on Sunday. Lucia García, who joined United from Athletic Bilbao in the summer, and Hannah Blundell scored their first goals for the club, highlighting the strength in depth United now have, and especially from a goalscoring point-of-view. It’s a trait that might might just see Marc Skinner’s side break the stronghold of Chelsea, Manchester City and Arsenal and secure a Champions League spot this season. RO

Gareth Taylor was pointed in his comments after Manchester City’s 2-0 defeat by Chelsea. “Players make mistakes, everyone makes mistakes, and we’ve got to be super-careful that we’re not jumping on it,” he cautioned. “I saw more positive things from the team today, and I’ve fed that back to them afterwards.” He is not wrong, there were positives on Sunday, especially in their first-half performance. However, the visitors struggled for a reaction after conceding the first goal of the game and it quickly became Chelsea’s to lose rather than City’s to win. The big concern for last season’s third-placed side is that they look aimless – either the plan is wrong or it’s not being executed properly. SW

“If this [officiating] is not addressed, it’s going to start costing managers jobs,” said a furious Kelly Chambers after Reading suffered a controversial 2-1 defeat at Brighton. It was the second week in a row that Reading came away from a game feeling hard done by the officials. The controversy in question occurred half an hour into Sunday’s contest, when Deanna Cooper rose to head in a clever free-kick. The assistant’s flag went up, but replays showed the defender was onside when the delivery was struck. Brighton then took the lead through Lee Geum-min and while Reading dominated the second half they were ultimately left to rue their wastefulness in front of goal, as well as the assistant’s flag. Sophie Downey

Park takes pride of place in Everton’s storming of Anfield

Everton’s summer of change involved a new manager, the exit of nine senior players, five permanent signings and loan deals for several young players including Manchester City’s Jess Park, Chelsea’s Aggie Beever-Jones and Arsenal’s Gio Queiroz. The loan strategy was deliberate, offering valuable playing time to developing players who may need to be patient elsewhere, and paid dividends at Anfield where 20-year-old Park excelled in the 3-0 Merseyside derby victory over Liverpool. Manager Brian Sorensen, savouring his first win as Everton manager, said: “When I first talked to the club I had some targets. I wanted young English players like Jess Park and Aggie Beever-Jones and we were lucky to get them. I am so happy for Jess. The way she performed was top.” Andy Hunter