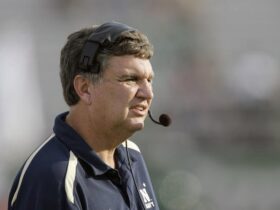 Archive — a brilliantly bizarre sci-fi flick streaming on Prime Video — is a story about robots.

Released back in 2020, a trio of robots populate the world of its story. But instead of the most realistic CGI that money can buy, Archive’s robots are clearly people waddling along as best they can inside chunky robot suits. It’s simultaneously hilarious and fantastic.

Archive comes from Gavin Rothery, a graphic designer who had a huge role to play in not just the concepts but the creation of 2009’s captivating sci-fi piece Moon. While Archive isn’t as hypnotically eerie as Moon, its assured directing and finely crafted components make it a hidden gem worthy of excavating from Prime Video’s vault.

Theo James is the lone central figure, playing an American robotics engineer in the far off land of a Japanese forest in 2038. He brings affable dad energy to a spaceship-esque work facility, where he’s been tinkering with car-size robot daughters and is about to create a third and final fully grown realistic woman robot. It’s not as seedy as it sounds.

In the opening moments of Archive, the film looks like a Joe Wright period piece. Crisp lighting brings out the details of a snow-dappled forest. This setting shifts across seasons as George continues his work. Repeated shots of a waterfall seem like reused exterior footage, until a surprising turn of events involving Prototype 2, a robot that acts like a teenage girl. This robot plays multiple roles, including a villain, one you end up feeling incredibly sorry for.

Aside from cute robots, Archive explores a familiar story already covered by the likes of Black Mirror. But it’s the delivery that makes Archive impressive. It’s a story about artificial intelligence, grief and loss that moves at a steady pace but always keeps enough gears humming to hold your focus on the screen. Surprisingly, much of the tension simmers between the robots themselves.

The two big story strands come together for the final third, almost in perfect unison. You’re set up to anticipate the mystery of George’s past unfurling into the light, while the consequences of tinkering with sentient robots arrive right on cue. (And then that aforementioned final twist bonks us on the head.)

Wisely, Archive doesn’t show its hand straight away. Details about George’s work and intentions don’t become clear until the final moments of the film, but we’re given just enough pieces of the puzzle to form our own conclusions.

Archive isn’t totally original storytelling, but it’s one of those neat sci-fi packages that does everything well. It’s satisfying, contains no cringey dialogue and looks sleek, despite a meager budget. It also doesn’t try to rinse your mind with thought-provoking ideas that require extra curricular reading to understand. And scientific accuracy? There’s none to speak of, but this isn’t one of those films. If nothing else, Archive is a film about unconventional, sweet robots. Don’t say you’ve watched everything on Prime Video until you’ve watched the film about the sweet robots.