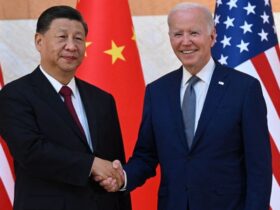 The Census Bureau reported Thursday that a key measure of August US retail sales rose unexpectedly by 0.3% on a monthly basis, following a revised decrease of 0.4% in July. Retail sales, which are not adjusted for inflation, were up by 9.1% from a year ago.

The continued decline in gas prices was reflected by a 4.2% drop for the month on spending at gas stations. Backing out this volatile component, sales rose by 0.8% for the month. Persistently high food inflation showed up in a 0.2% increase in spending at grocery stores on a month-over-month basis.
The strong reading, indicating a resilient consumer, is likely to give more ammunition to the Federal Reserve, which has been raising interest rates in a bid to tamp down the highest inflation in 40 years. Consumer prices in August rose by 8.3% over the past year, the Bureau of Labor Statistics reported Tuesday.

Of the 13 categories of retail spending tracked by the Census Bureau, eight rose in August. Spending at food and beverage retailers was up 0.5% for the month and has risen by 7.2% over the past year. Sales increased at restaurants and bars, and car dealerships jumped by 2.8% on the month. Spending on building materials and equipment, clothing and sporting goods also rose.

Clothing and department stores “may have been able to keep a lot of back-to-school shoppers spending in-store,” said Doug Hermanson, principal economist at Kantar. “Gasoline prices have been down the past couple of months… From a parent’s perspective, it freed up a little bit of cash they didn’t think they were going to have in May or June.”

August spending fell at gas stations as well as at furniture retailers, electronics stores, health and personal care stores, and at non-store retailers. Non-store sales, a rough proxy for e-commerce, likely fell in August due to the timing of Amazon Prime Day in July, market observers suggested.

“Consumer electronics and furniture are pulling back. Those are the channels showing the weight of the housing market… continuing to hit those sectors,” Hermanson said. Freddie Mac data found that mortgage rates rose above the 6% mark for the week ending Thursday, the highest level since fall 2008 and more than double the rate from a year ago.

The retail report suggests that the tailwind of lower gas prices was a key factor helping Americans cope last month. This raises the worrisome prospect that a wintertime spike in gas or home heating costs could trigger a significant retrenchment, since consumers have less dry powder today than they did a year ago, when household balance sheets were better fortified with savings from lockdowns and government assistance.

“I think consumers are reacting to a couple of things. One, they’ve drawn down a lot of their savings and are also reacting to high prices for a lot of goods,” said  Luke Tilley, chief economist at Wilmington Trust.

Pain at the pump exacerbates this, he said. “Gas prices are certainly a challenge for consumers. They very much act like a tax. If we saw another spike in gas prices then we would expect to see weaker spending in a lot of these other retail sales categories.”

A delicate balancing act for the Fed

At its meeting next week, the central bank is widely expected to increase its benchmark interest rate by 75 basis points (or three-quarters of a percentage point) for the third time in a row.

“The Fed has gone well out of their way to emphasize that they’re going to be data-driven going forward… rather than trying to forecast,” said Ross Mayfield, investment strategy analyst at Baird.

Fed officials, though, will also have to take into account crosscurrents like the surprising downward revision to July’s retail sales data, which was recalculated to reflect a 0.4% drop from an initially flat reading. This suggests that the consumer is beginning to show some fatigue, analysts said.

“Consumers are still spending. In many cases, however, they’re taking home less,” Stifel chief economist Lindsey Piegza said in a research note. “With inflation continuing a relentless climb, shoppers are struggling to keep up with elevated prices eroding purchasing power,” she said, adding that changes in spending patterns indicate that consumers are beginning to get concerned about their financial security.

Ted Rossman, senior industry analyst at Bankrate, said there is evidence that wealthier household balance sheets are holding up while lower-income families struggle to buy necessities, but this economic stress is creeping up the income spectrum.

“I think we are starting to see that move up,” he said. [It’s] eroding people’s savings. We see it in things like credit card balances,” which he said are approaching a record high. “There’s a cumulative effect to all this.”