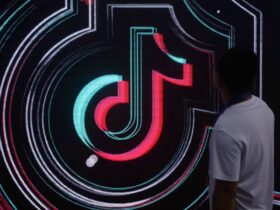 TikTok might be too big to ban, no matter what lawmakers say

There was good news and bad in Friday’s revised data about the UK economy. It grew — marginally — in the second quarter of the year, rather than shrinking as previously estimated.

But the latest update from the Office for National Statistics also showed that the United Kingdom is the only G7 economy that has not recovered fully from the pandemic, with GDP still 0.2% smaller than at the start of 2020. And, according to the Bank of England, the economy is most likely already shrinking again, with inflation heading to 11%.

“The important thing [in Friday’s data] was that the UK is struggling to grow and facing a probable deeper recession down the road, and today’s revision doesn’t change that,” said Craig Erlam, senior market analyst at Oanda. ​

It may be a long time before it does recover, given the crisis unleashed by Prime Minister Liz Truss’ decision last week to unveil huge unfunded tax cuts alongside a massive package of energy subsidies. That gamble spooked financial markets and sent borrowing costs for the government, businesses and households soaring.

“You have all these things coming together, that are going to go counter to the government’s objectives of higher growth and lower inflation,” Mohamed El-Erian, bond market expert and adviser to Allianz, told CNN earlier this week. “And again, the situation wasn’t great to begin with. Now, the problems have been amplified.”

An emergency intervention by the Bank of England on Wednesday calmed markets, and prevented the collapse of some pensions funds. But the Truss plan to boost growth has backfired badly, with investors now expecting that the central bank will have to raise interest rates by 1.25% or even 1.5% by November 2 to tackle its inflationary impact.

What happens next is far from clear. Truss and her finance minister Kwasi Kwarteng insisted Thursday that they would stick with their plan, but they have a very narrow window — perhaps as little as two weeks — to convince investors that they can be trusted with the nation’s finances. The Bank of England’s emergency bond-buying is due to end on October 14.

Having spent the summer bashing economic orthodoxy, and — in the words of former central bank governor Mark Carney — “undermining” some of the most important UK institutions, Truss and Kwarteng met Friday with one of those key players, the Office of Budget Responsibility.

The OBR provides an independent assessment of the impact of government budgets on borrowing and growth. Truss and Kwarteng had rejected its offer to provide a draft analysis of last Friday’s fiscal bombshell.

Mel Stride, a senior lawmaker from Truss’ Conservative party, said that the OBR was likely to deliver a very uncomfortable message on Friday.

“I suspect strongly that it will be that this circle cannot be squared,” Stride told the BBC.

Promising large unfunded tax cuts with inflation running high and a tight labor market, and expecting reforms to generate the growth to pay for them would not work.

“So there needs to be a rethink and that will be a very difficult conversation,” Stride said.

The OBR said after the meeting that it will deliver its initial forecasts to Kwarteng on October 7. The Treasury said that it would publish the forecast alongside its medium-term fiscal plan on November 23, resisting calls from lawmakers to release them as soon as possible.

The big problem for the UK government is that it is caught between having to reassure the markets, and voters who are growing increasingly angry at the spiraling costs of their mortgages.

“Raising, postponing, or abandoning tax cuts will be avoided by Truss at all costs as such a reversal would be humiliating and could leave her looking like a lame duck prime minister,” wrote Mujtaba Rahman and Jens Larson at political risk consultancy Eurasia Group earlier this week.

The only alternative left to balance the books would be to slash government spending, and that would prove equally politically difficult as a recession looms with its public services under enormous strain and a restive workforce that has shown it’s ready to strike in large numbers over pay.

Poll ratings for the Conservative party have collapsed. British polling agency Survation recorded its largest ever lead for the opposition Labour party over the governing Conservatives this week — 21 points.

The poll, taken September 28-29, found 49% of respondents said they would vote Labour if an election were held tomorrow, up six points from their showing on September 5, the day before Truss took office. The Conservative party was on 28%, down five points.

A separate poll by IpsosUK, also released on September 29, showed Labour with clear leads over the Conservatives on policies for the economy, managing taxes and public spending and the cost-of-living crisis.