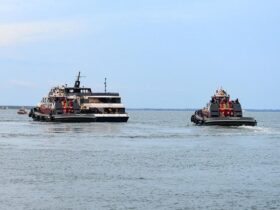 Foldable phones seem like something right out of a sci-fi movie. Yet here they are, making waves, and becoming increasingly popular. With Samsung’s Galaxy Fold 2 and Motorola’s Razr 2020 with 5G may be two of the most well-known devices, but they’re not the only worthwhile ones on the market today. We’ve rounded up some of the most exciting foldable phones available now — and have looked ahead at what’s to come.

Since entering mainstream consciousness in late 2018, foldable phones are poised to transform the tech industry over the next several years, along with 5G. There’s a lot of buzz surrounding these devices, as they offer the compact footprint of a flip phone and the perks of a smartphone.

The foldable phones on this list are just a hint at what’s to come. The foldable screen will become thinner, the phone will do a better job of managing battery life and mobile apps will take advantage of different display sizes. Not to mention the convenience of finally being able to fit a smartphone in your pocket.

Google has helped by committing to providing Android support for foldable designs. (Given some of its recent patent filings, it may even release a folding phone of its own.) In short, prepare to see more foldable phones and devices with a folding screen in the near future. Here are the brands that have flexible phones or are expected to join the foldable craze.

As the direct competitor of the Razr, the Galaxy Z Flip folds like a clamshell phone and has a stunning design. It remains one of our favorite flexible phones, even months after we originally reviewed it. The Z Flip has a top-tier Snapdragon 855 Plus processor, two internal cameras for wide and ultra-wide photos and can charge other accessories with wireless PowerShare. On Aug. 7, Samsung released a 5G version of the Z Flip that costs extra.

Samsung’s successor to its headline-making Galaxy Z Fold (more on that below) improved many of the irksome features of the original. Aptly named the Galaxy Z Fold 2, the phone has a refined design and hinge mechanism, a 120Hz display and better app fluidity between the inner and outer displays.

The Razr (2019) was the highly anticipated redux of the classic Razr from 2004. Introduced in November 2019, the first flexible Razr phone excited tech enthusiasts for its pioneering yet iconic design. (At the time, flexible phones were big and folded like a book). The phone featured a 6.2-inch display, two cameras and a splash-proof body.

As the phone that kicked off the mainstream flexible phone trend, the Galaxy Z Fold gave a compelling peek into the future of foldable displays. Its generous 7.3-inch display expanded out like a tablet and it had a total of five cameras. But widely reported issues with the display led Samsung to improve the design with its followup the next year.

Nubia, an associate company of Chinese phone-maker ZTE, took the concept of a foldable phone one step further with its Nubia Alpha. The device launched at $449 (£360 or about AU$640), but has now been discounted for $299. It’s unique in that it’s a phone that wraps around your wrist, similar to a smartwatch. It features a flexible 4.01-inch display, gesture controls and a water-resistant design. Its 5-megapixel camera can also record 10-second videos. However, it’s missing a lot of app support and it doesn’t have Instagram, Google Maps or an internet browser.

This isn’t the first time we’ve seen a phone that looks like the Alpha. In 2016, Lenovo had a concept device called the CPlus, which had a 4.26-inch display that you bent over your wrist. Unlike the CPlus, the Alpha is a real device you can buy. Read our Alpha Nubia hands-on.

The Mate XS is a minor update to the Mate X, a flexible phone that launched in 2019 but was sold only in China. The Mate XS, however, will be available in other countries, including the UK. (Due to ongoing security concerns from the US government, it is unlikely that any Huawei phone will come to the US for the time being.) Though no official price has been set, the phone’s expected to cost around £2,200 (about $2,850 or AU$4,300) and it features a stronger display and the latest Kirin 990 processor. Read our Huawei Mate XS hands-on.

Despite not being a huge tech name, Royole, a Chinese startup with offices in Fremont, California, was the first to sell a flexible phone. Its flagship device, the Royole FlexPai, was revealed in November 2018 and started at $1,318 and £1,209 (about AU$2,180 converted).

Its sequel, the FlexPai 2, debuted on March 24 and has 5G connectivity, a 7.8-inch flexible display and a Snapdragon 865 chipset. Read our Royole Flexpai 2 first take.

What about other phone-makers?

Other phone companies like Apple and Google haven’t released specific flexible phones yet, but there’s evidence that they, and others, are exploring the concept. This is either based on official reports from executives themselves or patent filings. Take a look below at some of the companies that may jump on the trend with upcoming products of their own.

In February, Apple once again updated its patent application for a clamshell phone with a foldable display and body. In the latest filings, the patent is for “electronic devices with flexible displays and hinges.” These filings have been ongoing since Apple’s first one nine years ago, in 2011. Since then, rumors of a flexible iPhone reignite with every new updated document — filed in 2014, 2016 and 2017 and 2019 (pictured here).

But in keeping with its usual style, Apple has remained mum on details, and this year’s iPhone 12 launch came and went without any flexible phones. As of now, nothing has come to fruition with any of these patents in the public eye, and there hasn’t been any info on what this device might be (and if it will even be a phone at all) or a timeline for when to expect such products.

Fast-forward later to May 2019 when Google then confirmed that it’s been prototyping the folding technology, but didn’t see a clear use case for foldable screens yet. In addition, Google supports foldable phones with its Android OS platform to develop the technology from the software side as well. With the launch of the Pixel 5, Pixel 4A 5G and Pixel 4A this year, we’ve yet to see a flexible phone from Google.

Mostly known for its affordable televisions, Chinese tech company TCL is working on a number of foldable devices, which include two tablets (one of which folds three times!), two phones and a cufflike phone you wear around your wrist. Despite it not being a household name in the US, you may know TCL better through other brands it owns, namely BlackBerry, Alcatel and Palm.

The upcoming devices all have flexible AMOLED displays that can bend because of what TCL calls a DragonHinge. Patented by the company, the hinge enables the screens to fold both inward and outward. TCL estimates that its first foldable phone will be available in 2020 and that it could cost less than $1,000 — making it significantly cheaper than the Motorola Razr and both foldable Galaxy phones.

In January 2019, Chinese phone-maker Xiaomi introduced its foldable phone on the social media platform Weibo. Unlike other phones we’ve seen, which have only one bend down the middle, Xiaomi’s phone folds down into thirds, with both sides folding down.

Xiaomi co-founder and President Bin Lin said this design is “practical and beautiful” and that it “perfectly merges the experience of a tablet and a phone.” Specs and pricing information weren’t given, but Xiaomi is currently taking votes on two possible names: the Dual Flex or the Mix Flex.

LG doesn’t have any foldable phones to announce yet, but we do know the company is interested in several different form factors and designs. For example, it released many phones that come with a second-screen attachment, which opens similarly to the Galaxy Fold: the LG Velvet, LG V60 (pictured here), the LG G8X and the LG V50.

It released the unique LG Wing too, which has one screen that swivels on top of the other, and it teased another phone with an extendable, roll-out display. We also know that LG has the technology in the works for a flexible phone. Back in 2014, LG did launch the G Flex, a phone with a curved screen. And at CES 2019, it showed off a rollable LG TV that later went on sale.

In the meantime, however, these two-screen accessories will have to do.