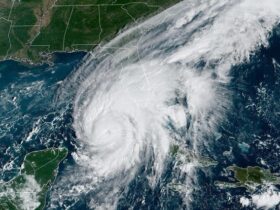 Military Prepares as Hurricane Ian Bears Down on Florida

Warning lights are flashing in the global economy as high inflation, drastic rate hikes and the war in Ukraine take their toll.

There is currently a 98.1% chance of a global recession, according to a probability model run by Ned Davis Research.

The only other times that recession model was this high has been during severe economic downturns, most recently in 2020 and during the global financial crisis of 2008 and 2009.

“This indicates that the risk of a severe global recession is rising for some time in 2023,” economists at Ned Davis Research wrote in a report last Friday.

As central banks ramp up their efforts to get inflation under control, economists and investors are growing gloomier.

Seven out of 10 economists surveyed by the World Economic Forum consider a global recession at least somewhat likely, according to a report published Wednesday. Economists dialed back their forecasts for growth and expect inflation-adjusted wages to keep falling the rest of this year and next.

Given surging food and energy prices, there are concerns that the high cost of living could lead to pockets of unrest. Seventy-nine percent of the economists surveyed by the World Economic Forum expect rising prices to trigger social unrest in low-income countries, compared to a 20% expectation in high-income economies.

Investors are also getting more concerned, with the Dow Jones Industrial Average sinking into a bear market Monday for the first time since March 2020.

“Our central case is a hard landing by the end of ’23,” billionaire investor Stanley Druckenmiller said at the CNBC Delivering Alpha Investor Summit Wednesday. “I will be stunned if we don’t have a recession in ’23.”

Even Federal Reserve officials have conceded there is a growing risk of a downturn.

Still, there are clearly bright spots, especially in the United States, the world’s largest economy.

The US jobs market remains historically strong, with the unemployment rate sitting near the lowest levels since 1969. Consumers continue to spend money and corporate profits are sturdy.

There are also hopes that the worst US inflation in 40 years will cool off in the coming months as supply catches up with demand.

The Ned Davis researchers said that although recession risks are rising, its US recession probability model is “still at rock-bottom levels.”

“We do not have conclusive evidence that the US is currently in recession,” the researchers wrote in the report.