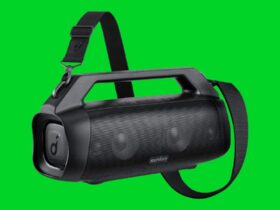 The world just took in Stranger Things’ fourth season on Netflix — an epic, intense two-parter that pits the kids against Vecna, the show’s baddest villain yet. But do you remember those early days of the show, when Joyce used Christmas lights to communicate with her missing son and Eleven and the gang had but a mere demogorgon to spar with?

This may take you back: The Byers’ house seen in early seasons of the show is a real home in Fayetteville, Georgia, and it’s now on sale. The three-bedroom, two-bathroom home is listed on Zillow for $300,000 (about £266,119, AU$ 452,352) and “makes for a PERFECT Airbnb, short-term rental, or personal residence for someone willing to take it on,” according to the listing. You’ll have to supply your own DIY baseball bat.

The home pops up at least five separate times in the show’s first episode — twice in season 1, episode 4 — and it also appears some in seasons 2 and 3, according to the listing.

The single-story home sits snug in a wooded area. The Zillow listing include images of the exterior and interior alongside the same pictures with an eerie pink tint… and some creepy figures looming about. “Don’t get stuck in the upside-down though,” the listing says. “This home does need a full rehab.”

According to the listing, fans continue to show up “almost daily” to get a peek at the home of Will, Joyce and Jonathan. “The owners had to put up a driveway barricade and private property signs just to keep people from trespassing,” the listing says. But the real question is, has that kept the demogorgons away?

Stranger Things, which debuted on Netflix in 2016, is expected to wrap up its story for good next season. While time is running out for the beloved fantasy series, you could still spend forever in the Byers’ house. (Or if you happen to live close to Durham, North Carolina, this fan experience won’t put you out $300K.)