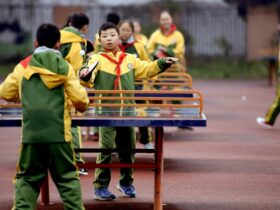 In the days of Space Invaders, you could get your name on the high-scores screen multiple times – if you were good enough. Somewhere in the multiverse, there is a clunky old arcade game that flashes up: Jet 318, Jet 238, Jet 199. They were Keaton “Jet” Jennings’ three top scores for Lancashire in Division One, a run short of matching a “triple doubles” record from a very different era.

Despite playing only 11 of the 14 scheduled matches, the left-handed opener’s bounty of 1,233 runs at 72.5 proved the largest haul in the division and played a major part in Lancashire’s second-place finish. He also captained the 50-overs side to the final of the Royal London Cup, leading his county’s run-getters with 390 at 48.8.

So much for the stats. At 30, Jennings appears at ease with his game, made evident in an economy of movement into line, the good balls defended, the bad balls hit hard. He is an accomplished player of spin but looks to have the game for dealing with pace too. There’s a touch of Marcus Trescothick in his presence at the crease these days – and England might fancy some of Tres’ output from a batter who appears much more equipped to deal with the challenge of Test cricket than when last picked in February 2019.

Watching Toby Roland-Jones at Lord’s, you see this tall, strong man run in (yes, quite a long way) with the pavilion behind him and move the ball a little this way and a little that, seldom offering much that could be comfortably left, with enough pace to keep the batter honest. It makes you wonder why he didn’t make it as a Test bowler.

Then you dial up his statistics and discover that, actually, he did – it was injury that stymied him and then a sense that, at 34, his time has now passed. But he took 67 wickets at 18.8 in Middlesex’s promotion season, topping the charts in Division Twoand, just as importantly, he sent down 476 overs – in the Championship, only Dom Bess worked harder.

Like Jennings, he has matured into a player who knows his limitations and focuses on his strengths to maximise his returns on different pitches in different conditions. Glenn McGrath would approve. With three half-centuries and 354 runs at 29.5, his batting is handy, but it’s more secondary than it once was when he threatened to hold down a spot at No 7 – he’s an eight these days, especially next year in Division One.

Like Tom Bailey at Lancashire and Dan Worrall at Surrey, Roland-Jones is a classic English seamer (OK, Worrall is Australian, but he earns the label) who is all about accuracy and nibble at 80mph or so. Whether that will win series overseas, where speed through the air and lift off the pitch matters more, is debatable – but those of us who value excellence on our pitches in our competitions don’t really care that much. Genuine pace makes it own rules and will always come through, but let’s not lose the old virtues in pursuit of the very few who can hit 90mph consistently.

OK, they’re not quite Andy Roberts, Michael Holding, Colin Croft and Joel Garner – the great West Indies pace quartet of the early 1980s – but Hampshire’s three pacers finished in the top seven wicket-takers in Division One and they were the main reasons their county won more matches than any other, nine from 14 outings. To finish third seems a rather meagre return when you put it like that, especially as Ben Stokes has backed a “go for the win” policy regardless of the match situation and it’s working for England.

Keith Barker, Kyle Abbott and Mohammad Abbas played 14, 13 and 12 matches respectively, each taking over 50 wickets at about 20 – frankly, you are going to win a lot of cricket matches with numbers like those. Barker is left-arm, all muscle with more craft than initially meets the eye; Abbott is right arm, still aggressive, making the batter play; and Abbas is as wily an operator as a traditional sub-continental spinner, the ball never quite arriving where you expect it and, whoops, you’ve nicked off again.

But there’s another reason why these three get my vote. They bowled 1,230 overs this season in a variety of conditions and were always there for their captain, despite the fact that all three men made their debuts in 2009 and are well into their 30s. We know pace bowling hurts and it hurts more the older you get (everything does), so it’s a testament to their fitness and motivation that they maintained their standards over six months of combat.

Better than Don Bradman? Of course not, but 107.44 is higher than 99.94, so the young Yorkie can at least claim to have a higher 2022 Division One average than the Aussie nonpareil does in Tests.

At 23, Brook started the season with 101 and 56 not out as Yorkshire beat Gloucestershire and he had viewers on YouTube purring about his timing, particularly his driving through extra cover. Next up, Northants were taken for 84 and 77 not out. And so it continued.

By now, spectators were pitching up to watch him and others were seeking him out on Yorkshire TV because what we had on our hands was not just a batter in form, but a batter in the Zone. Few are granted access to that mythical, sacred space, the land where everything happens slowly, where the ball is never felt on the bat, when every delivery can be hit anywhere, but the right destination is always chosen. To watch is to observe a batter on another plane.

Brook exited the Zone on the 20 July and has faced a red ball in one innings since then. If you want to back high performance, you really have to let the high performers play.

The surname didn’t help – there’s a more famous one in Essex after all. It also didn’t help a young seamer to have Jamie Porter and Simon Harmer hoovering up the wickets before he had his shoulders loosened for a second spell.

But the local pacer has always been excellent, running in and getting top-order batters out with movement both ways at fast-medium. With Porter and Harmer playing less frequently at Chelmsford in 2022, Cook took his chance, snaring 51 wickets at the preposterous average of 16.2 and economy rate of 2.2.

If nobody gets hold of a player across a season and he keeps getting people out, he might have what in takes to succeed at Test level – though he also might not, because it’s a tough game. We’ll only find out if he is given a chance. He recently turned 25, so has time on his side and there are a couple of vacancies coming up soon.