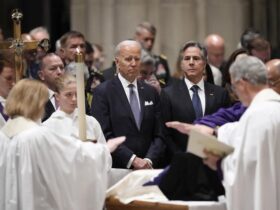 Over seven decades, the late Queen taught a masterclass in elegant, purposeful dressing.

Caryn Franklin is a fashion and identity commentator, and professor of diversity at the Kingston School of Art in London.

One of the many legacies left by Queen Elizabeth II is an illustration of how clothes can rally a nation. Captured in motion by an army of lensmen and women throughout her 70-year reign, Britain’s longest-serving monarch displayed an innate and finely tuned understanding of visual branding.

The value of fashion and image-making had previously been explored with positive results by Elizabeth’s father, King George VI: In a mission to regain public trust after his brother Edward VIII abdicated to marry the twice-divorced American Wallis Simpson, he invited couturier Norman Hartnell to peruse the Buckingham Palace art collection for inspiration. While the sophisticated Simpson wore the latest fashions, the King commissioned gowns for his wife and daughters that underlined the traditions — and, consequently, the stability — of the Victorian era.

Following the death of her father in 1952 , Queen Elizabeth II’s accession to the throne brought with it the immediate need to calm her people once again. The spectacle of Elizabeth, a glamorous and charismatic royal, would now be fortified with gravity and authority to assure politicians, international heads of state and subjects of her intended long-game.

Notes from the Royal Collection Trust reveal that Hartnell submitted nine different designs for the coronation gown, and the young queen selected his eighth, bedecked with scalloped tiers of embroidery bordered with pearls, diamanté and gold bugle beads.

Queen Elizabeth II leaves behind a masterful fashion legacy defined by elegance and diplomacy. Click through to see some of her most memorable moments.

Here, in a beautiful hat, the late Queen arrives at St Paul’s Cathedral in London for a service of thanksgiving held in honor of her 80th birthday on June 15, 2006. Credit:

In a masterstroke of political know-how, and with the world’s press upon her, Elizabeth curated the greatest red-carpet moment of all. “Glorious” was reputedly her own word for the gown that captivated and delighted her subjects.

Such is the power of a garment or an outfit that this monarch learned quickly to avoid the novelty of fashion, exchanging the gimmickry of short-lived trends and loud statement silhouettes for a deliberate announcement at each appearance. Thus, Elizabeth never missed an opportunity to deliver a message of reliability, stability and steadfastness to her audience.

Of course, there were fashion top notes for daywear, but brought in as flourishes. Looking at archival photos from her reign, we see an effortless deployment of the decades’ trends, such as the nipped-in waists of the ’50s; the shorter skirt lengths, sleeveless dresses and pillbox hats of the ’60s; and the turbans and bold prints of the ’70s. And who could forget the Queen power-dressing in high-octane colors for the ’80s?

Later in life, Elizabeth established herself as master of the frock coat, dress and matching hat in colors as bold as purple, orange, red and fuchsia. Warmth and approachability — as well as the need to be easily spotted in a crowd at her diminutive height — meant the color beige rarely made the grade.

The Queen speaks with the Emir Of Bahrain in 1979. Credit: Tim Graham/Getty Images

Queen Elizabeth II with a group of children during her state visit to Mexico in 1975. Credit: Serge Lemoine/Hulton Royals Collection/Getty Images

In his memoirs, Hardy Amies, another royal dressmaker, summed up the timeless quality needed for royal appearances when he wrote, “Style is so much more satisfactory than chic. Style has heart and respects the past; chic, on the other hand, is ruthless and lives entirely for the present.”
Style also takes a great deal of management and, working with Angela Kelly, her trusted personal assistant and curator of the wardrobe, Elizabeth created a manifesto for careerwear success. Fabrics were test-driven for limited rustling and anti-crease appeal, and weighted at the hemline to prevent gusts of wind making mischief. Subtle prints were employed to prevent marks from showing, and there were even detachable underarm pads to conceal perspiration. For trips overseas, outfits were designed to subtly compliment the host nation’s customs and culture.

Queen Elizabeth ll arrives at Aberdeen Airport with her corgis ahead of a vacation in Balmoral, Scotland in 1974. Credit: Anwar Hussein/Hulton Archive/Getty Images

White gloves, always by Cornelia James, sometimes changed several times a day, and hats anchored with tonally matched hatpins were coordinated with a much-favored Rayne or Anello & Davide mid-heel shoe (broken in by staff, and regularly repaired). All would be finished with a modest-sized, oft-worn leather bag from Launer.

Speaking to the Times in 2012, Stewart Parvin, who has designed for the Queen since 2000, revealed that outfits were filed by name and cataloged according to where she’d worn it and who she’d met. “That’s why people will think she wears things once, because there’s such a system,” Parvin said. “If she was going to meet President Obama, she wouldn’t wear the same dress.”
There would be frivolity too, however. At the Royal Variety Performance in November 1999, for instance, Elizabeth wore a multicolor sequined harlequin bodice and sleeves with bold yellow skirt, which thrilled paparazzi. And then there was the shrill lime-green ensemble worn for a balcony appearance at the Trooping the Color parade to mark her 90th birthday.

In private, Elizabeth, a horsewoman and racehorse owner, preferred neutral shades. Tweeds, boots and waterproofs would be accessorized with the signature silk triangle scarf. While at Balmoral Castle in Scotland for family holidays and official events, the Queen would proudly wear the Balmoral tartan designed by Prince Albert, her great-great grandfather.

To know that denim was not a fabric to be entertained by the Queen is to know this was a woman who seemingly never took a day off from a continuous non-verbal conversation with her subjects: A chat for those in need of reassurance, a statement for those who sought her authority and a declaration for all who wished to connect on some human level with the woman who wore the crown.

This purposeful broadcast of the benefits of a reign born of subtle progress, not dramatic change to shock or destabilize, can be seen as a virtuoso performance in public appearance — and one this monarch no doubt took pains to pass on to younger members of her clan.