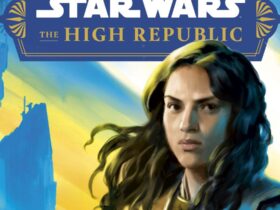 Netflix is sitting on a wide range of sci-fi series, from Stranger Things to Black Mirror to The OA. It’s also tapped excellent international content, including German sci-fi Dark — one of the best series on Netflix full stop — as well as hidden gems, such as Canadian sci-fi Travelers.

Scroll down to hopefully find the best Netflix sci-fi for you, plus excellent international offerings.

Hilary Swank is the big star at the heart of Away’s space drama. She plays Emma Green, a NASA astronaut and commander of an expedition to Mars. Things get off to a rocky start, and Emma’s international crew fill her with doubt over her ability to command. With time split between Earthbound drama and reliable entertainment above the stratosphere, Away is mostly successful in landing an all-rounded journey.

The reboot of the 1965 series of the same name propels us forward to 2046, two years after humanity finds itself on the brink of extinction. The talented Robinson family head out with a crew to colonize a new planet. Aside from inescapable family drama, they face strange new environments and an odd alien robot that befriends young Will. Mystery, heart and a memorable villain in Parker Posey’s Dr. Smith give Lost in Space plenty of fuel to lift off (seasons 2 and 3 are markedly improved over season 1).

A DNA researcher claims that it’s possible to match people based on genetics, and founds a matchmaking service. A murder investigation takes things for a turn. The One is based on a book of the same name by John Marrs, published in 2016.

Netflix cancellations don’t get more criminal than the axing of The OA. This wildly unique story follows Prairie Johnson, a young blind woman who returns after being missing for years, now with the ability to see. She claims to be the “original angel” and convinces a small group of locals to listen to her impossible story, involving abductions and great escapes. The OA is the kind of grounded sci-fi that catches you and its heroes completely off guard when it introduces its fantastic concepts. Watch the first two impeccable seasons on Netflix and cross your fingers the third is picked up elsewhere.

This apocalyptic sci-fi from Belgium will probably turn you off from flying any time soon. Set on a plane, Into the Night sees a red-eye hijacked by a soldier who, along with the rest of the passengers, ends up surviving a deadly global event down on the ground. Can they keep the plane going long enough to take them to safety? That premise alone should be enough to entice you to catch this excellent, tense thriller.

If The 100 looks like your standard teen drama, prepare to have your expectations exceeded. There’s a reason this post-apocalyptic series scored seven seasons: The 100 brings rich world-building and moral dilemmas that push the stereotypical characters into unique, compelling places. The 100 in question are a generation of juvenile detainees sent to Earth to determine whether it’s habitable post-apocalypse. 100 percent give this one a go.

Germany’s answer to Stranger Things deliberately takes its time before stepping into completely compelling and original places. A sci-fi noir, Dark folds time travel, conspiracies and estranged families into a generation-spanning story kicked off by a child’s disappearance. If those kinds of meticulously crafted layers are what you’re after in your storytelling, settle in. All three seasons of Dark’s meditative look at time travel and its effect on human nature are waiting to hit you at full force.

From the creators of The Matrix comes another story that plays with reality. Sense8 follows eight strangers from across the world who discover they’re mentally and emotionally linked. Not only do these windows into vastly different lives teach tolerance, but the “sensates” can also tap each other’s skills when facing a sinister organization hunting them down. If you jibe with Sense8’s diverse characters, you’ll fall head over heels for this earnest and sensual sci-fi drama.

This adult animated anthology series spans a range of genres, with plenty of episodes hitting the Black Mirror comparison button. Robots in a post-apocalyptic city, farmers piloting mech suits and a space mission gone wrong all pop up in the first season. While the episodes can be hit and miss (some have been criticized for their treatment of women), you’ll find plenty of thought-provoking and impressive animation.

Yeah, Gong Yoo from Squid Game’s in this. What else do you need to know? This South Korean sci-fi mystery follows a crew of astronauts on a mission to an abandoned research facility on the moon. Their target: a sample of an unknown substance for unclear purposes. Betrayal, government lies and personal secrets send this addictive space journey into a tailspin.

Altered Carbon is set in a cyberpunk world where human consciousnesses can be transferred into different bodies. This sees investigator and ex-soldier Takeshi Kovacs transported into the body of Joel Kinnaman in season 1 and Anthony Mackie in season 2. Initially, Kovacs’ story involves solving a murder, before he goes on a quest to unravel what happened to his own lost love. Altered Carbon can be clunky at times, but its visual candy and entertainment value hoist you through the exposition and heavy-handed social commentary.

Full disclosure: Netflix sadly canceled Travelers after its third season, but this tightly plotted sci-fi out of Canada does manage to end with an ambitious bang. We start with Marcy, a disabled woman who’s beaten up after helping a friend escape thugs. She dies — then comes back to life. This strong character-driven sci-fi reveals its secrets in clever ways, following operatives from the future tasked with preventing the collapse of society but also navigating the tricky territory of living a double life.

Unfortunately this sci-fi series isn’t seeing a second season — another Netflix casualty that was killed off far too soon. Two timelines, cults and a mystery are wrapped into Archive 81’s tantalizing package. The multiple genre-straddling show stars Mamoudou Athie as Dan Turner, an archivist who takes a gig restoring a collection of damaged videotapes from the ’90s. He gets far more than he bargained for, drawn into an investigation of a mysterious cult and a young woman who may or may not be dead. A supernatural thriller with horror, noir and sci-fi seeped into its creepy atmosphere, Archive 81 has it all.

While Charlie Brooker’s bleak tech anthology series can be hit and miss, at its best, Black Mirror packs its mini-movies with an exploration of futuristic technological ideas through painfully human stories. One of those is San Junipero, following two women in the ’80s (cue banging soundtrack) as they fall for each other in ways they couldn’t do in their “real” lives outside the beach city. The tech aspect is revealed with genius timing and, in general, the show explores the consequences of our plugged-in lives in disturbing and occasionally uplifting ways.

It wouldn’t be a best list without Stranger Things. If somehow you’ve missed the Duffer Brothers’ ode to ’80s horror and Steven Spielberg, things are about to get tubular. We follow El, a near-mute girl who was the subject of scientific experiments. She develops telekinetic powers, which she uses to fend off monsters who invade from a frightening alternative dimension. The world of Indiana, Hawkins, is lovingly detailed for anyone in need of an ’80s nostalgia hit and the misfit characters, played by a stellar young cast, are part of everything that makes this show a tour de force.