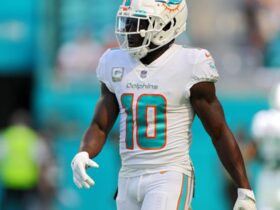 How to Watch NFL Network: Bills vs. Dolphins Livestream

Tesla, pushing ahead with work to create humanoid robots and build truly self-driving cars, will detail its work at the company’s second AI Day starting at 5 p.m. PT Friday. Expect to see some of the most advanced examples of artificial intelligence technology around, but be prepared to wait more years before that technology is ready for the mainstream.

The Tesla Bot, a humanoid robot code-named Optimus that Chief Executive Elon Musk debuted at the first AI Day, is a likely star of the show. Last year, we only saw specifications, a mockup dummy and a herky-jerky dance from someone wearing an Optimus outfit in a peculiar attempt to illustrate what the Tesla Bot would look like. Musk delayed the second AI Day to wait for a physical Tesla Bot prototype.

Previous events in this vein, like last year’s AI Day and the Neuralink debut in 2019, have featured splashy technology. But they’ve  also been geared to help Musk recruit ambitious and talented engineers, and the second AI Day follows that pattern.

“This event is meant for recruiting AI & robotics engineers, so will be highly technical,” Musk tweeted Thursday. “AI/robotics engineers who understand what problems need to be solved will like what they see,” he added.

Tesla is hiring Tesla Bot engineers to make not only walking humanoid robots but also wheeled models for factories, according to job ads spotted by Reuters, and Musk explicitly plans splashy events like AI Day to recruit employees.

Musk himself has fretted about how puny we’ll be compared to superintelligent AIs that pose an “existential threat” to humanity, so don’t feel silly if you’re worried about bending the knee before our future robot overlords. However, with Optimus, Tesla is trying to ease our minds, seeing the Tesla Bot as a helpful assistant. It showed an image of robot hands making a heart shape on its Instagram page, promising, “If you can run faster than 5mph, you’ll be fine.”

Sharing the spotlight with the Tesla Bot likely will be a much longer-running project, FSD Beta, Tesla’s technology to move its vehicles toward full self-driving abilities.

Here’s what you need to know about AI Day.

How do I watch Tesla’s AI Day?

The company hasn’t yet shared details on tuning into the AI event, but it’ll likely be streamed on its YouTube account like the first Tesla AI Day. That’s what Musk has used for high-profile events for the carmaker and two of his other companies, rocket maker SpaceX and brain-computer interconnect designer Neuralink.

Precise timing isn’t yet clear, but in-person attendance begins at 5 p.m. PT Friday, according to an event invitation.

What’s Tesla up to with the Tesla Bot?

When Musk unveiled the Tesla Bot idea, he said it would be “friendly” and designed to handle “dangerous, repetitive, boring tasks” a human would want to avoid. “In the future, physical work will be a choice. If you want to do it, you can, but you won’t need to do it,” he said.

As designed, the 125-pound, battery-powered, human-size robot will move with the aid of 40 mechanical actuators, including 12 in its hands for “human-level” functioning. It’ll lift 150 pounds and perceive the world using eight cameras. Tesla’s design showed it using the same computer that controls Tesla’s cars.

It’s extremely hard to build a robot that can handle the variety of environments that humans inhabit. But operating in a more limited and controlled circumstances, like a Tesla warehouse or factory, reduces the complications. That’s like Tesla beginning its self-driving car work by making its Autopilot function work only on freeways, where lanes are well marked, there are no traffic lights, and parked cars and pedestrians are rare.

It’s harder to make a humanoid robot than a squat, wheeled machine. Boston Dynamics’ Atlas robot is a good example of how many years the research can take. But if you can get one to work, it’s conveniently configured to navigate and manipulate objects in a world humans have created for themselves.

What is AI, anyway?

These days, artificial intelligence generally refers to using gargantuan piles of real-world data to train computer systems to recognize patterns, understand what’s going on and make decisions. It’s a profound change from the narrow strictures of traditional if-this-then-that programming, instead focusing on the ability to wrestle with a wider variety of tasks that are vastly more complex and subtle.

Big Tech is investing billions of dollars into AI for projects like Google search results, Apple iPhone 14 photography and Facebook’s system for picking ads based on the text of our posts. It’s progressing steadily, though it’s still largely used for specific tasks and lacks the general-purpose abilities of human brains.

Tesla is a major player in AI. Its FSD Beta software is one example, but a Tesla Bot that wanders our homes, responds to our commands or moves boxes of bolts around a Tesla factory floor also will have to use AI.

One of the most difficult parts of AI is training the model, an effort that requires a data center’s worth of computing power. It can take days or weeks to train sophisticated AI models.

Tesla built technology called Dojo to speed up AI training geared for ingesting video data from Tesla cars. At the foundation are its custom-designed AI processors that can be linked by the thousands into a single “exapod.” Expect to hear more about Dojo at AI Day.

To make sense of input video, objects in it like bicycles, traffic lights’ left turn arrows and stop signs must be labeled. That’s partly done by humans and partly by other AI systems, and Tesla has invested heavily in autolabeling.

Once an AI model is trained, other Tesla-designed processors in the company’s cars run the model to identify their surroundings and make decisions about how to drive.

There, too, Tesla developed custom AI chips. “Tesla’s inference engine is among the best in performance…, giving them a real advantage,” said Keith McMillen, CEO of BeBop Sensors, a startup designing touch sensors robots can use.

FSD, short for Full Self Driving, is technology that by auto industry standards is actually categorized as driver assistance. Tesla requires a human to pay attention and be ready at all times to take over from the computer if necessary, enforcing its policy with requirements that the driver often exert some turning pressure on the steering wheel.

FSD is an advance over Tesla driver assistance technology called Autopilot that works only on freeways. But Tesla has struggled for years to deliver FSD to customers that paid for it. In recent months, it’s opened an FSD Beta program to drivers who earn a high safety score, as judged by the Tesla car’s monitoring of behavior like hard braking or following other cars too closely.

Is a robot AI harder or easier than a car AI?

The same technology Tesla develops for cars can be adapted for humanoid robots.

“Our cars are semi-sentient robots on wheels — neural nets recognizing the world, understanding how to navigate through the world,” Musk said at the first AI Day.

But the variety of situations a robot might encounter in a person’s home is vastly more varied than what a car encounters on a road, as are the tasks we might command it to perform. A robot that operates in more limited circumstances, like in a factory or warehouse, would be easier to train.