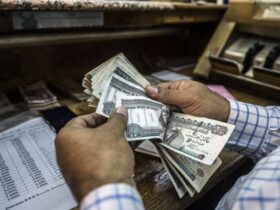 Egypt: How the Arab world’s most populous country became addicted to debt

Throughout the final week of Roger Federer’s life as a professional tennis player, he handled his emotions far better than he had envisioned. But at the end of his final match alongside his rival Rafael Nadal, a tense 4-6, 7-6 11-9 loss representing Team Europe against Team World’s Jack Sock and Frances Tiafoe at the Laver Cup in London’s O2 Arena, the 41-year-old finally succumbed.

As the tears began to fall, alongside him Nadal wept, too. After 18 years of meeting each other on the court, contesting some of the fiercest battles in the biggest finals around the world, they spent the final moments of Federer’s career on the same side.

Before Federer’s first grand slam title at Wimbledon in 2003, men’s tennis was at a crossroads. As the influence of top US players waned, some believed the immediate future of the sport was bleak. But first Federer arrived, playing in his seemingly effortless way, driven by his endless toolbox of shots and learning how to harness his audacious talents, and then Nadal followed as a perfect foil, his physical, topspin-heavy style marking them as stark opposites.

Between 2004 and 2019, they faced each other 40 times in singles. Their excellence pushed men’s tennis, and each other, to incredible heights, leading to what many consider a golden era when Novak Djokovic joined them to form the “big three”.

Their rivalry has always been professional and friendly, but Federer and Nadal have over time become increasingly close. Nadal’s wife, Maria, is due to give birth to their first child soon, but Friday night’s event meant so much to the Spaniard that he had to be there.

“When Roger leaves the tour, an important part of my life is leaving too because of all the moments that he has been next or in front me during important moments of my life,” said Nadal, who is now 36. Nadal and Federer sat together during the ceremony, even holding hands, and there were displays of emotion from all directions. Djokovic, 35, put his hands on Federer’s shoulders, and Andy Murray, also 35, hugged him warmly several times. Greece’s Stefanos Tsitsipas, 24, who credits Federer with inspiring him to play tennis and choose a one-handed backhand, was also in tears. Federer later embraced his wife, Mirka, his parents and his four children.

After struggling with intense emotions during his on-court interview with another former No 1, Jim Courier, Federer revealed that his only request for the ceremony had been that an interviewer would direct the occasion. Had they just handed him a microphone to speak, he said, he would not have been able to manage his feelings.

“I was able to remind myself always on the court again how wonderful this is,” said Federer. “This is not the end-end, life goes on. I’m healthy, I’m happy, everything’s great, and this is just a moment in time, you know. This is obviously supposed to be like this.”

It has been a historic month for tennis. Serena Williams, who turns 41 on Monday and is only a month younger than Federer, retired amid emotional scenes at the US Open.

Despite talk of retirement following both players as early as the late 2000s, they paired their success with astounding longevity. Finally, many years after most of their rivals left, their era is coming to an end.

The circumstances of Federer’s retirement, forced by the chronic knee injury that left him in rehab for most of his last three seasons and which created uncertainty about whether he would even be able to manage one last doubles match, were far from ideal.

But, flanked by the rivals who battled him, the final moments of his career created an unforgettable demonstration of sportsmanship and compassion.