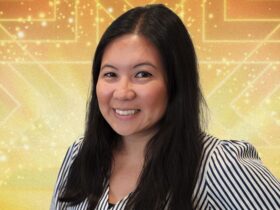 Intel and Samsung have another new idea for how to make a PC: a “slidable” device with a screen that extends out to a much larger size when you pull the edge.

Lacking a keyboard, the slidable PC looked more like a tablet. But with a screen diagonal ranging from 13 inches to 17 inches, it was sized more like a laptop. Intel Chief Executive Pat Gelsinger and J.S. Choi, leader of Samsung’s display division, showed the device Tuesday at Intel Innovation, a conference where the company also debuted Intel’s new 13th Generation Core processors.

A slidable PC device will satisfy needs for both a large screen and portability, Gelsinger said. It’s a demonstration of what’s possible with OLED display technology that’s built onto a flexible plastic substrate.

It isn’t clear when or even if the slidable PC idea will mature into a product. But the design shows how the PC industry continues to try out new hardware to extend beyond traditional clamshell laptops with a keyboard and screen connected by a hinge. Other examples include laptops whose screens hinge all the way backward to convert the device into a tablet and the ThinkPad X1 Fold, with a folding screen.

Moving parts and flexible components heighten the challenges of complexity and reliability. Costs also increase, a concern during a shrinking PC market. But novel designs can find a niche, and premium PCs are faring better than budget PCs, Michelle Johnston Holthaus, head of Intel’s PC chip group, said at the conference.

Earlier this year, Samsung demonstrated a slidable phone screen along with other novel designs.

Although the slidable PC prototype didn’t have a keyboard, one could be added as the design matures, for example by folding out from underneath, Holthaus said.

The new chips reach new speeds, with a clock that ticks as fast as 5.8GHz, but they also draw more power in desktop machines. Expect an improvement in 2023: “Early next year we’ll release a [model] that for the first time ever hits 6 gigahertz out of the box,” though Intel will ship it only in limited volumes, Gelsinger said.

Apple, which ejected Intel from its Mac laptops and desktops in favor of its own M1 and M2 processors, is another challenge for Intel.

“They’re a formidable competitor, and they have a good part. Our goal is to build a part that is equally as good,” Holthaus said. “As you see future generations, when you think about performance per watt, we’re going to have products that absolutely compete with Apple.”