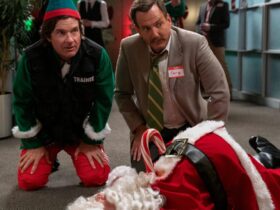 NASA wasn’t about to miss the chance to capture its historic ambush of an asteroid through the eyes of its most powerful space observatories. On Thursday, NASA and the European Space Agency released new images taken by the Hubble and James Webb space telescopes showing the moment the DART spacecraft collided with the small asteroid Dimorphos.

DART was designed as humanity’s first experiment in kinetic impact mitigation, which is a lot of syllables to say the goal was to smash a spacecraft into an asteroid to see if the collision could alter the space rock’s orbit. The technique could one day be used to protect Earth from an asteroid or comet that threatens to impact our planet.

Neither Dimorphos nor the larger asteroid that the moonlet orbits, Didymos, pose any threat to us. In fact, no known asteroids pose a significant threat at the moment.

The effort to capture the instant of the impact, as well as earlier and follow-up imagery of the crash site, marks the first time Webb and Hubble have made observations of the same target at the same time.

The images are captured in different wavelengths of light, with Hubble showing the impact in visible light and Webb using an infrared instrument. The bright center of the images show the point of impact, which maintained a heightened level of brightness for several hours. Plumes of material ejected from the surface of the asteroid by the collision are also visible.

“When I saw the data, I was literally speechless, stunned by the amazing detail of the ejecta that Hubble captured,” said Jian-Yang Li of the Planetary Science Institute who led the Hubble observations.

Astronomers will continue to review observations and data from the event with telescopes located both in space and on the ground to get a better idea of how the impact changed Dimorphos, both in structure and in terms of its path across the cosmos.