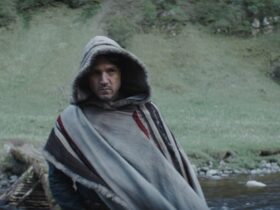 Another drama-free hold for Sock and we’re still on serve in the opener.

Chants of “Let’s go Roger, let’s go!” ring through the O2 Arena as Federer steps to the baseline for his second turn on serve. He’s pressured a bit this time after an unforced error pushes it to 40-30, then a second serve. But Nadal bails them out with a volley at the net to nail down the hold. Says the Spaniard during the changeover: “It’s unbelievable when you don’t play doubles how slow you are on the net.”

Tiafoe breezes through another service game to keep pace with the Federer-Nadal pair. No real moments of danger in any of the six games so far.

Nadal holds for Team Europe. Federer has overcome some early nerves and is firmly in the match. Elsewhere, the newly minted world No 1 is among the worldwide TV audience of millions.

A quick hold for Sock and all four players have held their opening service games.

Federer holds comfortably in his opening service game, despite losing a point where he managed to hit the ball through this gap between the net and the net post. Even at 41, he’s doing things we’ve never seen before.

Sock and Tiafoe cruise to a stress-free hold in their opening service game. Tiafoe, fresh off his inspired run to the US Open semi-finals which included a career-best win over Nadal in the fourth round, punctuates it with a booming ace.

Nadal is first to serve and he opens with a double fault. The ball was called in but a Tiafoe challenge overturned it. Federer then hits a forehand volley winner at the net early in a rally for 15-all, prompting another ovation. It could be a long night at this rate. Nadal makes it 30-15 with a lunging backhand volley into the alleyway before holding after a couple of errors by the Sock/Tiafoe team. A tidy hold for the crowd favorites after the double fault to start.

Federer and Nadal have just emerged from the tunnel to an extended standing ovation at a jam-packed O2 Arena. They’re trailed by Team Europe coach Björn Borg. They’ve now taken the court for their warm-up, trading shots with the American pair of Jack Sock and Frances Tiafoe (who shared a court with Nadal not so long ago).

The tributes have poured in from all over the world in the eight days since Federer announced his retirement. The great German footballer Philipp Lahm added to the pile with this thoughtful column in today’s Guardian.

Federer’s career path forms a stark contrast to the present. In times of professionalisation, young athletes are often treated like investments – especially in sports where there is a lot to earn, like tennis. At a young age, they are sent to academies and camps, which are talent factories. Athletes’ biographies are increasingly created outside the federation, outside society. They are privatised.

The entertainment industry of sport sees talent as a resource and a capital investment. As soon as it has identified the talent, it becomes a project. You take it out of the structures, do your own thing. The goal of the athlete is no longer to give something back to the community, but to optimise profit and build a business.

Because more and more people imitate this, many end up falling by the wayside. Talent is a rare gift. This is how sport distances itself from society. If it is no longer part of it, it loses its charm and credibility.

On Friday, the world can marvel at the genius of Federer one last time. It’s time to get nostalgic. Many Federer moments come to mind. I often think of the spring of 2017, when he experienced a resurgence after many injuries. He won Indian Wells and Miami. In Australia he beat Nadal in the fifth set despite being behind.

It was the time when I ended my career. I was happy that Federer continued and I watched all his matches then – it was a wonderful pastime. He proved his prowess to everyone again. That’s how I will remember Roger Federer.

Federer and Nadal alternated between their courtside dugout with the rest of their Team Europe team-mates and backstage during the Murray-De Minaur match.

Not much longer now. The players should be on court for tonight’s feature attraction momentarily.

Alex de Minaur has won 5-7, 6-3, 7-10 over Andy Murray in a first-to-10 match tiebreak. A bit of a slow starter, but it featured some very high quality over the last half hour. In fighting back from a set down, the 23-year-old Aussie has delivered a desperately needed point for Team World, who did not want to fall into a 3-0 hole right out of the gate.

Team Europe have won all four editions so far, though the title was decided in the 12th and final match on two occasions. Federer clinched the trophy in 2017 and Alexander Zverev did the same in 2019.

The Europeans are already out to a 2-0 lead in this year’s event after Casper Ruud and Stefanos Tsitsipas pocketed singles wins in today’s afternoon session over Jack Sock and Diego Schwartzman, respectively.

Federer, Nadal and Novak Djokovic are all playing on Team Europe together for the first time. The Big Three, as they are widely known, have combined to win 63 of the last 77 grand slam championships (Nadal 22, Djokovic 21, Federer 20).

De Minaur has just taken the second set in his ongoing match with Murray. Under the rules, the match will be decided by a 10-point tiebreaker rather than a full third set, meaning tonight’s main event should be off and running by the top of the hour.

Hello and welcome to the O2 Arena for the final match of Roger Federer’s storied career. The 41-year-old Swiss great, who hasn’t competed since a quarter-final loss at Wimbledon to Hubert Hurkacz in July 2021, announced last week that he’s walking away from professional tennis following a series of operations on his right knee that made his long-sought comeback to the men’s tour untenable.

And so he’s bidding farewell tonight in London at the team event founded by his management company alongside his longtime rival and friend Rafael Nadal. The twosome are due to compete for Team Europe against the Team World doubles pairing of Frances Tiafoe and Jack Sock.

It’s not the first time Federer and Nadal have featured on the same side of the court: they won a doubles match together in the first edition of the Laver Cup back in 2017. But they are far better known for their roles in one of the great rivalries in the history of sport. They’ve met a total of 40 times in singles (with Nadal winning 26), including 14 times at grand slam tournaments (with the Spaniard winning 10), none more memorable than their epochal showdown in the 2008 Wimbledon final.

“I saw him playing on TV before I arrived on tour. I saw him having success on TV, and then (we were) able to create an amazing rivalry together,” Nadal said yesterday. “And on the other hand, something that probably we are very proud of is having a friendly rivalry. Tomorrow is going to be a special thing. Difficult. Going to be difficult to handle everything, especially for Roger, without a doubt. But for me, too. At the end, one of the most important players – if not the most important player – in my tennis career is leaving.”

Federer and Nadal will take the court after the conclusion of the night’s first fixture, a singles meeting between Team Europe’s Andy Murray and Team World’s Alex de Minaur that’s currently in the second set.

Bryan will be here shortly. In the meantime here’s Tumaini Carayol’s lookahead to Federer’s swansong tonight in London.

Roger Federer, Rafael Nadal, Novak Djokovic and Andy Murray – a group of the three greatest men’s tennis players of all time and the four defining competitors of the generation – were packed tightly together for their Laver Cup press conference on Thursday, when they all converged for the final time as professionals.

As they reminisced on their old matches and laughed about shared memories, glorious or devastating depending on the perspective, Federer interjected: “Sitting here, it feels good that I go first from the guys,” he said, smiling. “It just feels right.”

In many ways this final chapter of Federer’s career is bleak. Despite his reputation for avoiding serious injury through his career, his final years have been ravaged by physical problems. Unlike the recent intense, competitive departure of Serena Williams Federer cannot trust his knee to last more than one short doubles match. In his final bout alongside Nadal, his Team Europe teammate, he will enter the O2 Arena against Team World’s Frances Tiafoe and Jack Sock on Friday night simply hoping to compete at a respectable level.

But the circumstances are fitting. He will be seen off by three of the toughest opponents of his life, players who with him have defined this past decade and a half of tennis, pushing it forward in so many ways. Between them they have won 66 grand slam titles, faced off against each other 234 times and spent 933 weeks at No 1. For over a decade they packed out the later stages of each major event and blocked nearly all others from succeeding.