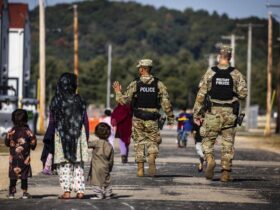 Military Bases Had $260M in Damages from Afghan Evacuation

Rick and Morty is all for pushing the envelope and the latest episode of season 6 — Bethic Twinstinct — safely met the brief. Space Beth and Beth spend some quality time together, going all in on the idea of self-exploration. The rest of the family? They’re preoccupied with the idea of avoidance.

It all plays out in truly unexpected ways, before Rick proves once again that he’s always a step ahead of everybody else. Let’s discuss that final moment involving a certain wine decanter in the spoiler-packed section below.

What does Rick do with the Venusian wine?

After Space Beth, Beth and Jerry resolve their issues in a surprisingly loving way, Space Beth hops in her spaceship and zooms off. Jerry says, “Well, seems like we all learned a little lesson this weekend. At least I know I did.”

We then cut to Rick retrieving the fancy red Venusian (from Venus) wine decanter from the kitchen sink. He unpockets a remote and clicks it to reveal a secret alien cabinet hidden inside the window. It’s filled with various objects, including what looks like a large phial holding a miniature Morty. Rick places the decanter inside and closes the cabinet, before chucking the remote in the sink’s garbage disposal unit and grinding it up.

Why did Rick destroy the remote to the hidden cabinet?

Space Beth and Beth shared the Venusian wine before they fell in love. Venus is a Roman goddess who was “identified by the Romans with the Greek goddess of love, Aphrodite,” according to Encyclopedia Britannica. Potentially the Venusian wine is a love potion. Rick destroying the remote and thus removing access to the wine implies Rick believed it was the wine which amplified Space Beth and Beth’s affection for each other, leading to them falling in love.

When Rick says he also learned a lesson, he appears to be referring to the lesson of not allowing the Venusian wine to get into anyone’s hands again — especially on Thanksgiving.

Time to speculate about who originally owned the wine and why it was on offer at the Smith’s Thanksgiving.

At the beginning of the episode, Morty sets up a GamePod XL gaming console on the family TV. The “most realistic video game console ever” was a gift from Space Beth. Potentially Space Beth also brought the Venusian wine as a gift. She certainly seems to know at least a little about it.

Like Beth, Space Beth says she gets “insecure trying to pronounce this crap too,” referring to the pronunciation of “Venusian.” She already has a solution: a device inserted through the neck that allows the user to speak French, aka Venusian (according to Space Beth). In a nutshell, it appears Space Beth is familiar with Venus and potentially the wine.

This implies she’s aware of the effects of the wine. Space Beth, Beth, Jerry and Rick all drink red wine at the beginning of the episode. Jerry gives an unexpected speech warning he’ll commit suicide if Beth ever cheated on him. One dark reading of this: Space Beth tried to kill Jerry by seducing Beth using the wine, thus driving Jerry to suicide.

On the flip side, the wine might also have been intended as a means to bring the family closer together for Thanksgiving. Maybe Rick supplied it not knowing how powerful a love drug it would be. He seems to accept Beth and Space Beth’s relationship, but warns Beth not to spin too many secrets around it.

The lesson Rick might have learned: The wine is far too dangerous a love drug and can cause an unusual relationship between his son-in-law, his daughter and his space daughter.

He might also have learned to destroy access to the Venusian wine so Space Beth can’t get a hold of it.

New episodes of Rick and Morty air on Adult Swim on Sundays.