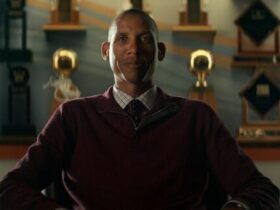 It’s started precipitating down at Longchamp!

Sir Mark Prescott, who trains Alpinista, has just arrived at the track.His runners is now joint-favourite for the Arc, and he told Sky Sports Racing: “It’s been 21 years since I’ve been here. I’m just going to go and have a look around and walk the track. Whatever happens I’m going to enjoy the day. I think every race she has run for the last two years she has improved a little bit. Quicker ground would have suited me better but she’ll run and she’ll do here best.”

Vadeni has just arrived. He has no idea the stink he’ll cause if he wins the Prix de l’Arc de Triomphe!

The first of six consecutive Group One races on the card – if you don’t count the event for pure-bred Arabians at 3.25 – is France’s most prestigious contest for juvenile colts, over seven furlongs, and there is news of a late non-runner here as Aidan O’Brien’s The Antarctic – expected to start favourite – was scratched at around 11.30am BST. That is bitterly disappointing news for O’Brien and Ryan Moore – he was the stable’s only declared runner – and also robs form students of an early test of the Middle Park form, as The Antarctic was two lengths behind Blackbeard in the Newmarket Group One last weekend.

In his absence, Shartash, in the Aga Khan’s colours, is likely to head the market to give Johnny Murtagh a victory as a trainer in a race he did not manage to win as a jockey, and a repeat of his one-and-three-quarter length third to Al Riffa in the National Stakes in September would put him right in the mix. The key form line among the home team, meanwhile, could prove to be a well-run renewal of the Group Three Prix de la Rochette over today’s course and distance in early September, in which Tigrais got up in the dying stride to short-head Breizh Sky. Gamestop, who was third home there but around two-and-a-half lengths behind the winner, is also in today’s field, while Pivotal Trigger, third behind Kubrick in a Group Three last time, lines up for Jessica Harrington.

They’re off in the Fashion Stakes in Paris. What’s the horse there on top of this racegoer’s hat?

The French racing authorities will be dreading Vadeni winning the Arc at 3,05pm this afternoon with bad-boy Christophe Soumillon on board. There will be plenty of punters who have supported him who won’t mind and his mount has been one of the best backed for the contest. The release from BritishGambler.co.uk that landed in my email box just now reminded me of this, stating: “Despite calls for Soumillon to voluntarily withdraw from this weekend’s racing, Vadeni goes into Arc day as one of the most backed horses with his odds tumbling in the last few days; so much that he is now a best-priced 8-1 (down from 12/1).” Two of the four pundits on Sky Sports Racing have just plumped fopr the colt too.

Aidan O’Brien has taken out Middle Park runner-up The Antarctic from the Prix Jean-Luc Lagardere (1.15pm) … and he was the favourite.

It’s sticky out there …

Good afternoon from Longchamp in the Bois de Boulogne, where 20 horses, 19 jockeys and one enormous distraction will go to post for the Prix de l’Arc de Triomphe this afternoon.

Christophe Soumillon, the rider with the weighing room’s sharpest elbow, is no stranger to self-generated controversies. He is also likely to be one of the very few individuals at the track today who does not give Friday’s incident at Saint-Cloud, when he could have caused Rossa Ryan to suffer a serious injury or even worse, a second thought in the run-up to the most prestigious race of the European season.

Many in the stands, though, will struggle to understand why a rider who acted as Soumillon did just 48 hours ago is being allowed to carry on working this weekend. The answer, apparently, is that despite having a history of organised horse racing that dates back to the Napoleonic age, the French authorities have never managed – or felt the need – to introduce a rule that allows them to stand down a jockey with immediate effect.

That may well change as a result of Soumillon’s moment of madness on Friday, but they are saddled with him as the focus of attention today, when his mount, Vadeni, will start at around 8-1 to add the Arc to his victories in the French Derby and Eclipse Stakes earlier this year. Soumillon’s previous Arc successes have been greeted rapturously by the Longchamp crowds but the reception for a win by Vadeni could be interesting.

As the odds suggest, of course, it probably won’t happen, as Vadeni is just one among at least a dozen very plausible winners, including Luxembourg, Alpinista, last year’s shock winner Torquator Tasso, Westover, Onesto, Titleholder and Al Hakeem.

Luxembourg, who was half a length in front of Onesto in the Irish Champion Stakes last time, remains a narrow favourite but is on the drift this morning, out to 9-2 from 7-2, while the hugely popular grey mare Alpinista, from Sir Mark Prescott’s stable in Newmarket, is hunting him up in the market at 11-2.

The weather in Paris this weekend has been much more pleasant than many forecasts predicted but the going is still described as very soft and horses were finishing tired in the staying races here on Saturday.

The first of six Group One races on today’s card is the Prix Jean-Luc Lagardere, for juvenile colts, which is due off at 1.15pm British time, while the Arc itself is quite early on the card, at 3.05pm. You can follow all the action here on the live blog along with news, views and the occasional tip, to which the usual caveats about investments will apply. Bonne chance a tous!