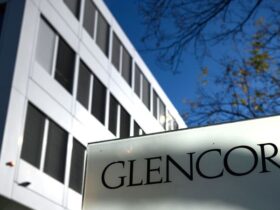 Having a family portrait taken by Haruhiko Kawaguchi comes with one unusual condition: That he wrap your entire house in plastic and then vacuum-seal you into an airtight bag.

From there, the Tokyo-based photographer has just seconds to capture the images he needs before setting his breathless subjects free.
The striking pictures, which Kawaguchi describes as a “memorial photo for the family,” form part of his ongoing series “Flesh Love,” an almost two-decade-long mission to explore human intimacy by shrink-wrapping people in plastic.

“When I started the series, I asked some of my closest friends to test how long they could hold their breath for, and found it was about 15 seconds,” Kawaguchi said via video call from Okinawa, Japan. “So, I decided to set a ’10-second rule’ whereby I open the bag after 10 seconds, regardless of whether (I have taken the photo) or not.”

Beginning with intimate images of lovers trapped inside sealable bags, which were once used to store futons, his photos have since grown in scale. The latest installation of his series, titled “Flesh Love All,” sees the photographer encasing couples or families and the places most important to them — usually their homes, complete with trees, cars and motorbikes — in custom-made plastic sheets.

Going by the name Photographer Hal, a reference to the talking computer in Stanley Kubrick’s “2001: A Space Odyssey,” Kawaguchi said his photos are primarily about love. And while his focus has shifted from the sexual to the familial kind, his goal remains the same: to depict human connection in its many forms.

It can take two weeks to create the custom wraps and set up a single image, while the final photo shoot requires the help of around seven people. An assistant is always ready to open the bags — or cut them open, in case of an emergency — if the photographer is unable to do so. He also keeps a portable oxygen tank to hand, as well as a spray to keep subjects cool during hot summer photo shoots.

For his earlier series, “Flesh Love Returns,” Kawaguchi asked couples to be photographed in places that were meaningful to them. Credit: Photographer Hal

Kawaguchi admitted that some people “feel claustrophobic” when looking at his photos. And he is all too aware of how suffocating it feels to be enclosed inside one of the airtight bags — because he has tried it out himself.

“When I was in the bag, I felt that my life and death was completely controlled by others,” he said. “I could actually feel how my subjects entrust their lives to me.”

When two become one

The series traces back to when Kawaguchi was a commercial photographer in his 20s. With little free time to produce his own work, he would take his camera to gigs and nightclubs, where he often photographed young couples.

“I found couples to be very attractive as subjects because they were full of joy, anger, sorrow and happiness,” he said. “As I observed them, I also felt that there was a relationship between the physical and emotional distance between two people.”

Finding volunteers among his friends (and friends-of-friends), Kawaguchi began “Flesh Love” as a way to “to visualize the intimacy and love” between couples, he said. The photographer worked with subjects to find positions that eliminated the gaps between their lubricated — and sometimes completely naked — bodies, before removing air from the bag using a vacuum cleaner.

The photographer said that fitting couples together is “like a puzzle.” Credit: Photographer Hal

“I require my subjects to rehearse their poses over and over again, and then recreate the chosen ones in the bag,” he said, saying it was like “fitting them together like a puzzle.”

Kawaguchi said he was inspired by Plato’s “The Symposium,” in which the philosopher said men and women were once single beings, with four arms, four legs and two faces, before the Greek god Zeus split them in half.

“Wrapping subjects in a bag was only a byproduct,” the photographer said. “The main purpose of my art is to turn two people who love each other into one being again.

“I still don’t know exactly what love is, but I don’t think it’s only about distance,” he added. “Surprisingly, I sometimes feel that the subjects don’t look very intimate, even if their bodies are completely close to each other. The reverse is also true.”

While his early photos used a simple studio backdrop, in “Fresh Love Returns” Kawaguchi shot couples in their homes and other indoor settings. Another series called “Zatsuran” meanwhile saw him shrink-wrapping couples with their possessions, from musical instruments to bicycles, like “dolls in a blister pack,” he said.

Having now wrapped entire houses, he hopes to go bigger still, such as vacuum-packing an entire park. He also hopes to explore “new artistic styles,” he added.

I’m also shooting a series called ‘Washing Machines,'” he said, “in which I put the subjects in the washing machines.”