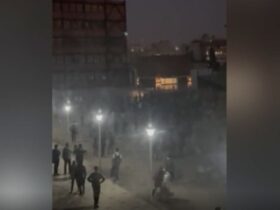 So this see-saw T20 series, the longest ever played between two international teams, has tipped again. England won the sixth match by eight wickets with 33 balls to spare. Which means everything is level at three-matches each. Sunday’s game will be decisive.

England’s top order finally clicked, in the same way the pill will eventually land on your lucky number if you keep spinning the roulette wheel. Phil Salt, who had made 71 runs in innings in his last eight T20 innings for England, splattered 88 runs across the Gaddafi Stadium, off just 41 balls. It was a brilliant innings, all vicious pulls and swingeing cuts and rocketing drives which skipped across the outfield so quickly that the chasing fielders seemed to move like molasses in January in comparison.

It felt like England had doubled down on the reckless approach that cost them in the previous match here when they lost the game chasing a smaller total than the 169 Pakistan made this time. Moeen Ali won the toss, again, and made the same decision to put Pakistan in. Moeen had been bitterly disappointed in the way his batsmen had played the last time he did that, but he was delighted with them on Friday night.

Salt could have been caught off the very first delivery, but the ball flew by just wide of point. He followed it up with four furious shots, three down the ground for four, the other flicked over fine leg for six. Alex Hales joined in with him, and belted Shanawaz Dahani down the ground for six, then hit three fours in a row off Mohammad Wasim. The two of them put on 50 runs together in just the first three overs of the innings before Hales was caught off the top-edge.

Salt’s response to the loss was to go harder. The fifth over went for 19, the seventh for 20, as Salt brought up his 50 off just 19 balls. Only Moeen and Liam Livingstone have ever done it quicker for England.

At the other end, Dawid Malan blazed 26 off 18 before he was out lbw to a ball that grubbed along the floor. Salt may well have beaten Livingstone’s record for the fastest hundred for England too, if next man in Ben Duckett hadn’t batted so well himself that he ended up making 26 of the 42 England needed when he came in. By the end, Salt settled for scoring in singles, which must be his idea of adjusting his play to the situation of the game.

Pakistan, then, were left to reflect on the questionable wisdom of their decision to rest the series’ leading run-scorer, Mohammad Rizwan, and leading wicket-taker, Haris Rauf, so they could bring in the 21-year-old Mohammad Haris for his T20 debut, and bring back Dahani.

England had made two changes of their own, with Richard Gleeson and Reece Topley swapped back in the team. Rizwan’s absence meant their batting leant on Babar Azam, who, in turn, then leant on England’s bowling. Azam made 87. But his took 59 balls. It was still an immaculate innings, with just the five fours in his first 42 balls, then a flurry of 36 from his final 17.

In the middle of it, Azam scored his 3,000th run in international T20 cricket. He’s only the fifth man to do it, and got there faster than three of the other four. It took him 81 innings, the same as it did Virat Kohli. Azam pressed on towards 4,000 by belting sixes off Gleeson, Willey, and Topley, whose final over cost 19 runs.

Azam had some support from Iftikhar Ahmed, whose grizzled mien and unlikely career has made him a bit of a cult hero. It helps that Iftikhar has somehow managed to keep a grip on his place in the team, despite only scoring one fifty and taking 12 wickets for Pakistan in 44 innings across all three formats. But he showed a little of what his team sees in him, here, with a swashbuckling 31 off 21 balls, which included two tremendous sixes down the ground off Adil Rashid. The second of them, which fetched up somewhere in the middle of the Raja Enclosure, was the biggest of the series at 106m. Then he was caught at mid-wicket.

Rashid had his second bad match in a row. He bowled four overs for 38, to go with his figures of four for 41 on Friday evening, and not a single wicket among them. England’s leadership team will hope that the problem is just that his floaty leg-spin isn’t all that well suited to the pitches here in Lahore. Pakistan have certainly made a point of targeting him, and since he’s been the only spinner in the side on both occasions, England haven’t been able to control the run rates in the middle portion of either innings. Not that mattered in the end, while Salt was batting like that.