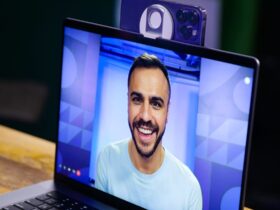 This MacOS Ventura Feature Makes Your iPhone a Webcam on Mac

Mohammad Haris gets off the mark with a swagger, clouting the new bowler Richard Gleeson back over his head for six. But he falls later in the over, steering a short ball straight to Rashid at short third man. It was good bowling from Gleeson, who followed Haris as he backed away.

2nd over: Pakistan 5-0 (Babar 4, Haris 0) There was a soupcon of swing for Topley, so David Willey – always dangerous when the white ball moves in the air – is going to share the new ball. Babar mistimes a couple of attacking strokes, which suggests the pitch might not be the best, and there are just three runs from the over.

1st over: Pakistan 2-0 (Babar 1, Haris 0) Reece Topley starts the innings with a wide, but he soon finds his range and ends the over with five successive dot balls to the debutant Mohammad Haris. Haris looks a bit nervouis, as you’d expect, and misses a very ambitious reverse lap.

England bring in Reece Topley and Richard Gleeson for Mark Wood and Chris Woakes. Still no sign of Jos Buttler, though it sounds like it’s just a precaution.

“We have to chase well and win the game,” says their captain Moeen Ali. Babar Azam says he would have made the same decision.

Our old friend Andy Bull has written some cracking stuff throughout this tour. Here he is on the series we would all love to see.

Sometimes, you don’t know what you’ve got till you’ve got it. Things we can’t foresee enrich our lives in ways we can’t imagine: true love, The Sopranos, memory foam. Who knew, for example, that once you reach a certain age, the hitherto repellent IKEA catalogue contains nothing but dopamine? And who had any idea that a seven-match white-ball series, which sounds like a uniquely sadistic form of overkill, could be so goshdarn life-affirming?

In ODIs, England have been involved in some mind-numbing, spirit-crushing seven-match series. The list of results isn’t pretty: 1-6, 1-4*, 4-3, 1-6, 1-6, 2-5. Some of us are still in therapy over the 6-1 defeat in South Africa in 1995-96, which presaged a desperate World Cup campaign. But this, their first seven-match T20 series, has been an almost ceaseless joy on and off the field. Pakistan lead 3-2 after thrilling victories in the fourth and fifth games, and a win today would give them the series with a game to spare.

There’s a bigger picture – the World Cup starts on 16 October – but England could do without having their morale punctured by another defeat. While there are mitigating circumstances, their form has an end-of-an-era whiff about it. From 2019-21, England’s bilateral T20 series record was W7 D1 L1. If they lose today, their record for 2022 will be W0 D0 L4. The last time they lost four T20 series in a row was – pop quiz, hotshot – never.

* Don’t you get wise with me, there was a tie and a no-result