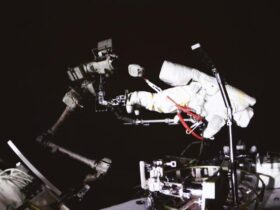 Nicolas Cage has a cat. Cage and that cat have inspired an art exhibit. The internet has never had a better day.

The art will be displayed at CatCon, a convention wholly devoted to the creature Al Gore had in mind when he invented our beloved worldwide network of connected computers. This year’s event — think of it like a Comic-Con for cat people — takes place from Oct. 1-2 in Pasadena, California.

“Nicolas Cage is an artist’s dream subject — he’s cult, he’s camp and he DGAF,” said CatCon founder Susan Michals, who’s also founder and curator of Cat Art Show, a biennial exhibit of feline-focused creations that’s sponsoring the Cage exhibit. “Cats have many of the same characteristics, so why not combine the two and celebrate it on canvas?”

Seven artists are bringing their brushstrokes and pixels to CatCon for Uncaged: The Unbearable Weight of Genius Cat Art.

The celebration of the versatile actor and his adopted black kitty Merlin includes Brian Hoffman‘s Catstor Troy, an 11 inch by 14 inch print, hand-embellished with diamond dust, embossed, signed and framed in a decorative vintage frame. The piece — an homage to Cage’s wild-eyed villain in 1997’s Face/Off — shows the actor’s head atop a retro cartoon girl’s body, a little blue bow in his hair. Three cartoonish cats surround him.

“It’s definitely strange and a tad creepy, but heartwarming and fun if you love Cage and cats,” says Hoffman, a Boston designer, illustrator and printmaker. “Initially, the piece had Cage sitting next to magic mushrooms in an homage to Alice in Wonderland and her cat Dinah, as well as that one time Nic Cage allegedly took mushrooms with his cat.”

“I find the disjunction of cat and human in Stockard’s work both reductive and resonant,” Jet said. “Anyone seen a bird I can kill?”

Cage’s pliably expressive face makes him a natural star of both paintings and numerous memes.

You’ve probably seen GIFs of him from the 1997 action-thriller film Con Air, his long hair blowing in the wind, his eyes half-closed, a blissful smile on his sun-kissed face as he walks toward freedom after a long prison sentence. You might have also seen the meme of his face superimposed onto countless images of cats. Appropriately, Cage is a lifelong cat lover who calls Merlin his best friend. “He loves contact,” Cage says in this interview. “Sometimes he’ll jump into bed and he’ll hug me, you know? I’ll actually think it’s my wife.”

The art in Uncaged will be on sale both in person at Cat Con and online via Cat Art Show. Ten percent of proceeds will benefit three cat-related charities, with this new Cage-cat genre hopefully benefitting all of meme-kind.