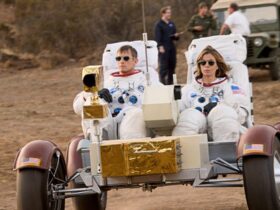 Carolina Herrera creative director Wes Gordon showed a collection of lush florals inspired by “The Secret Garden” inside The Plaza Hotel in Manhattan, while designer Victor Glemaud presented knits on rollerskating models at Rockefeller Center’s famed rink. Jason Wu’s collection — sheer elegance in beaded gowns and digital prints — showed in a space overlooking the East River at Pier 17 at the South Street Seaport, and Ulla Johnson took over the Beaux Arts Court of the Brooklyn Museum.

Tommy Hilfiger, meanwhile, teamed up with British designer Richard Quinn for a modern take on classic Americana on the Brooklyn waterfront, against the New York skyline. The show, a tribute to another former icon of the city — Andy Warhol’s Factory studio — was an A-List affair, with Kris Jenner, Kourtney Kardashian, Travis Barker, John Legend, and Kate Moss among those in attendance, with Moss watching her daughter Lila walk the runway. Barker later joined the stage for a drum performance at the end during the models’ final procession.

Gabriela Hearst hosted an airy warehouse show at the Brooklyn Navy Yard with a joyful live performance by the Resistance Revival Chorus, who performed in all white for the entirety of the show along a gold-streaked runway. The collection was inspired by the Ancient Greek poet Sappho, and black, white and gold dominated the presentation, with pops of red and yellow in swirling fire motifs.

The chorus added a sense of “femininity and strength and joy,” Hearst told CNN backstage.

Proenza Schouler set the tone for the week with its show on Friday, showing slouchy but tailored summery looks with fringe, crocheted detailing and sheer fabrics. The musician Arca opened while Kendall Jenner, Bella Hadid and Anok Yai also walked the runway.

At The Plaza Hotel, longtime Carolina Herrera model Karlie Kloss was one of the closers of the show, helmed by creative director Wes Gordon. Credit: Giovanni Giannoni/WWD/Getty Images

New York is back

This New York Fashion Week was a triumphant return for many after February’s shows were dampened by the Covid-19 Omicron variant, with last minute cancellations from mainstays like Tom Ford and many labels’ shifts to digital presentations.

“I feel like we are back — New York is back,” designer LaQuan Smith told CNN Style just after his show at the Intrepid air carrier, where onlookers hyped up the models as they walked the runway in sheer, flowing gowns and bold streetwear with skin-baring cut-outs. “As a native New Yorker I remember sneaking into New York Fashion Week shows that I wasn’t invited to, so it’s an honor for me to just be on the calendar and have buyers, stylists, and influencers coming to see what LaQuan Smith has to say.” Among his attendees were Cassie, LaLa Anthony and Jamaican dancehall queen Spice.

Related: Fashion & the Metaverse: A series of stories about the future of fashion and digital technology
Physical with a touch of digital

Despite a return to primarily in-person shows, the digital influence of the past two-plus years appears here to stay. Both Hilfiger and Gordon teamed up with the video game platform Roblox to give their physical collections a presence in the metaverse, with the Hilfiger show live streamed as part of the world “Tommy Play” and a Herrera dress that Karlie Kloss wore offered as a limited-edition item for players’ avatars.

“I think it’s just the beginning of the metaverse, and I want to be the fashion house to embrace it and carry it forward,” Hilfiger told CNN Style ahead of his show.

Scroll on to see highlights from New York Fashion Week. This story is developing and will be updated.

Eckhaus Latta’s show was staged in El Jardin del Paraiso, a community garden in the East Village — to the lilting tunes of a live harpist. Prints in the collection were from the archive of the deceased artist Matthew Underwood, a friend of the label’s co-designer Zoe Latta.
Credit: Giovanni Giannoni/WWD/Getty Images

Gowns at Jason Wu showcased sharp tailoring and delicate draping, in a collection that was both polished and effortlessly understated. Credit: Rodin Banica/WWD/Getty Images

“To the ones who are demonised because they are not understood in genders, in colors, in places and in values that others know: on this runway, know that we are no longer watching you, we are seeing you.”

Designer Naeem Khan with actress Kate Beckinsale, who made her runway debut at the show. Credit: Theo Wargo/Getty Images

Ulla Johnson offered up a mix of materials, styles and textures in her collection, ranging from prints inspired by artists Lee Krasner and Louise Bourgeois as well as the natural world, to vibrant monochromatic ensembles with a 1970s feel. Credit: Lexie Moreland/WWD/Getty Images

Johnson transformed the neoclassical interior of the Beaux Arts Court at the Brooklyn Museum into a space “reclaimed by nature” with the help of florist Emily Thompson, who created floral sculptures meant to mimic patterns of lichen. Credit: Lexie Moreland/WWD/Getty Images

“I think it’s just the beginning of the metaverse, and I want to be the fashion house to embrace it and carry it forward.”

Julia Fox was part of the star-studded event on and off the runway at “Tommy Factory,” Hilfiger’s reinterpretation of Andy Warhol’s famed Factory studio in New York. Credit: Taylor Hill/Getty Images

Bold prints and silhouettes joined more classic Hilfiger motifs. “I think it’s really exciting — we’ve taken the best of both of our heritages. It’s Americana and prep styles, but we put them through our filter,” Richard Quinn said to CNN about the collaboration. Credit: Taylor Hill/Getty Images

Whimsical, feminine florals were on display at the Carolina Herrera show helmed by creative director Wes Gordon. It was a return to the Plaza Hotel for the label, which showed there in 1984. Herrera herself was front row, and embraced Gordon after the show. Credit: Giovanni Giannoni/WWD/Getty Images

“I definitely become more and more comfortable each season,” Gordon told CNN. “I have developed great friendships with our clients and the women who wear Herrera and that I think has made me a better designer for them.” Credit: Giovanni Giannoni/WWD/Getty Images

“This collection to me was an unapologetic embrace of being a house that makes beautiful, colorful, floral, happy clothes … We don’t always have to be chasing a trend.”

I just wanted to ignite people with the clothing,” Quan told CNN of his collection, “and make women feel powerful, strong and sexy at the same time.” Credit: Arturo Holmes/Getty Images

“The collection is very specific — it might not be for everyone and that’s okay, but there’s a demographic of women who would buy these clothes up, and so that’s the audience I’m speaking to.”

Coach took over the Park Avenue Armory with a conceptual show that saw models act out dreamlike vignettes on stage before coming down the runway. Credit: Arturo Holmes/Getty Images for NYFW: The Shows

Lil Nas X made his runway debut for Coach. The collection featured a mix of streetwear and collegiate styles, from wide-shouldered, oversized jackets and high-tops to lettered sweaters and mini skirts. Jelly sandals also got their time to shine once again two decades later. Credit: Angela Weiss/AFP/Getty Images

At the Puppets & Puppets show, there were playful details on accessories, with bags adorned with cookies and bananas. Credit: Fernanda Calfat/Getty Images

Gold was a focus of Gabriela Hearst’s Sappho-inspired collection, in fabrics, accents and detailing. True to her sustainability efforts, Hearst said: “All of our materials are soundly investigated… there’s not one material in this collection that I didn’t approve or know the composition of.” Credit: Rodin Banica/WWD/Getty Images

Model Quannah Chasinghorse wrote in an essay for CNN Style last year that she works with Hearst because it’s important for her to align “with designers and brands who also uphold the same values around climate justice and sustainability.” Credit: Rodin Banica/WWD/Getty Images

Hearst used swirling fire motifs in two ways: embroidery on linen and hand-crocheted detailing on knitwear dresses. She became deeply fixated on the visual and conceptual touchpoints that drove the idea for the collection, she explained to CNN. Credit: Lexie Moreland/WWD/Getty Images

“I realized I swam a little deeper in the subconscious than usual (for this collection), and so I’m a bit more vulnerable and a bit more exposed, in a way.”

Hearst also reduced the runway show’s ecological footprint by working with the company Climeworks to capture an equal amount of carbon from the air, not just offset it. Credit: Kristy Sparow/Getty Images

The show always features a wealth of creativity from emerging talent in the industry. Credit: Dia Dipasupil/Getty Images

Ella Emhoff opened Maisie Wilen’s East Village show, which leaned into cyber aesthetics and took visual cues from CGI and filmmaking techniques, such as motion-capture markers which appeared on the garments as well as on the models’ skin. Credit: Arturo Holmes/Getty Images

Emily Ratajkowski was among the models walking for Burch in designs that played with sheer fabrics and layering. Credit: Slaven Vlasic/Getty Images

A previous version stated that Lola Leon walked the Tommy Hilfger show. This article was updated to reflect that Leon did not appear on the runway.