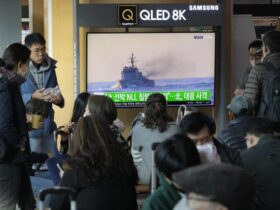 Spain snatched a place in the Nations League final four after Álvaro Morata’s late goal secured a 1-0 win over Portugal in Braga to ensure top spot in their group.

Portugal had dominated the match but Spain stayed in the contest and in the 88th minute a long ball into the box from Dani Carvajal was headed by Nico Williams across to Morata, who lashed it into the net to silence most of the sold-out stadium. Portugal had a late chance to earn the point they needed but Cristiano Ronaldo missed from close range to extend his scoreless streak with the national team to three matches.

Spain had not won in Portugal in nearly two decades, since a friendly in 2003, and this was their first competitive away victory against their neighbours since a 2-1 World Cup qualifying triumph in 1934. Spain finished top of League A-Group 2 on 11 points from six games, one point above second-placed Portugal who only needed a draw to secure a place in the semi-finals. The Spaniards join Croatia, Italy and the Netherlands in next year’s finals tournament.

Republic of Ireland avoided relegation to the third tier after a 3-2 win over Armenia. John Egan opened the scoring with a header before Michael Obafemi doubled the lead with a low long-range strike. Armenia struck twice in three minutes to put the Irish one goal from humiliation but Robbie Brady’s penalty in added time settled nerves in Dublin. The Armenians had two players sent off in the fallout from the late penalty decision.

Northern Ireland slumped to their third defeat of a poor Nations League campaign as they were beaten 3-1 by Greece in Athens, and they were only spared a relegation play-off as Kosovo thrashed Cyprus 5-1. Shayne Lavery quickly cancelled out Dimitrios Pelkas’ 14th-minute goal, but a scrappy, disjointed performance could muster no answer after Giorgos Masouras restored Greece’s advantage early in the second half, with a fine strike from Petros Mantalos settling it 10 minutes from time.

It was hardly a fitting night for Jonny Evans’ 100th cap, with the joy of Saturday’s late win over Kosovo at Windsor Park dissipated at the Georgios Kamaras Stadium as the 976 travelling fans gathered behind Ian Baraclough’s dugout made their feelings known, with some booing the manager at the final whistle. Northern Ireland avoided relegation but third place in League C Group 2 means they face the prospect of a tough Euro 2024 qualifying draw for the campaign that starts in March.

A stunning first-half volley from Benjamin Sesko helped Slovenia secure a 1-1 draw away to Sweden in League B Group 4, a result that relegated the hosts after a dismal campaign that featured four defeats in six games. Sesko gave the visitors the lead with a thunderous left-foot volley in the 28th minute but the Swedes bounced back, with Emil Forsberg levelling with a superb solo goal three minutes before the break. Knowing that they needed a win to stay up, the Swedes threw caution to the wind, but not for the first time in the competition, their attack came up well short of the mark as the game finished in a draw.

Aleksandar Mitrovic netted his 50th international goal as Serbia outclassed Norway with a 2-0 win to top League B Group 4 and gain promotion to League A. Erling Haaland almost got the home side off to a perfect start but his first-time shot after 20 seconds was brilliantly saved by Vanja Milinkovic-Savic. Dusan Vlahovic gave the visitors the lead in the 42nd minute and Mitrovic, already Serbia’s record scorer, doubled his side’s advantage nine minutes into the second half with a typically precise finish from Ivan Ilic’s pass.

Two goals in a minute from Remo Freuler and Breel Embolo steered Switzerland to a 2-1 victory over luckless Czech Republic at Kybunpark, a result that relegates the Czechs from Nations League A. Freuler headed Xherdan Shaqiri’s cross into the net on 29 minutes and straight from the kick-off Embolo collected a loose pass, ran to the edge of the box and fired a low shot into the bottom corner. The visitors reduced the deficit before halftime when Patrik Schick scored with a left-footed finish from David Zima’s low cross, while later Tomas Soucek saw his penalty saved by Yann Sommer on a tough night for the visitors, who also struck the frame of the goal on two occasions.