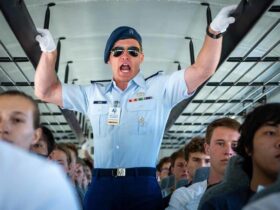 Applications to Air Force Academy Bounce Back After Plummeting During Pandemic

NASA’s Juno spacecraft cozied up to Jupiter’s funky moon Europa on Thursday, sending back some of the closest images ever taken of the icy world. The views give us our first really good look at Europa since NASA’s Galileo spacecraft buzzed by more than two decades ago.

NASA is posting raw images from the flyby to the JunoCam website. The first images to come in have a very yellow-brown tinge to them. I did some quick processing on one of the raw images to bring it a little more in line with views from Galileo. I’ll leave it up to the image processing experts to really bring out the full beauty of Juno’s new looks at Europa.

NASA shared a close-up of Europa as seen by Juno from a distance of just 219 miles (352 kilometers) above the surface. It shows an area called Annwn Regio near the moon’s equator. The image highlights the moon’s ridges and craters.

Europa is a little smaller than Earth’s moon. Amateur astronomer Stuart Atkinson revealed an early take on a wider view in a tweet on Thursday.

“The science team will be comparing the full set of images obtained by Juno with images from previous missions, looking to see if Europa’s surface features have changed over the past two decades,” Juno co-investigator Candy Hansen said in a statement. “The JunoCam images will fill in the current geologic map, replacing existing low-resolution coverage of the area.”

Europa is the latest feather in Juno’s cap. It arrived at Jupiter in 2016 and received a mission extension in 2021 to study some of the gas giant’s largest moons in more detail. It already checked out Ganymede and will be looking at Io next year. Besides pretty pictures, it also collected data on Europa’s composition, temperature and atmosphere.


The moon is the focus of NASA’s upcoming Europa Clipper mission. Europa is likely hiding a salty subsurface liquid ocean under its ice shell, making it a good place to look for potential habitability and signs of microbial life. The moon has also been known to spit out mysterious geysers that hint at activity below.

Juno’s work will fill in some of the science blanks as we wait for Europa Clipper to venture out for a visit.