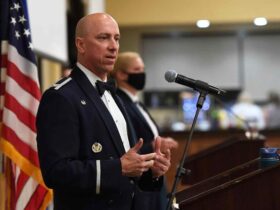 Halloween must be approaching. NASA and the European Space Agency are already leaning into the spooky side of the cosmos with a new James Webb Space Telescope view showing the innards of spiral galaxy IC 5332. It looks like a skeletal whirlpool.

IC 5332 is a little smaller than our own Milky Way and resides over 29 million light-years away. “It is notable for being almost perfectly face-on with respect to Earth, allowing us to admire the symmetrical sweep of its spiral arms,” ESA said in a statement on Tuesday.

Webb’s Mid-InfraRed Instrument, or MIRI, sees the universe in a specific set of wavelengths that give it a very special view of space objects. It’s able to pierce through veils of dust to reveal underlying structures that are hidden from other telescopes. MIRI has to operate in utterly frigid temperatures in order to work correctly. It has its own cooling system to keep it chilled out.

ESA compared Webb’s view of IC 5332 with a visible and ultraviolet image from the Hubble Space Telescope. The dark areas in the Hubble image are full of dust. “Those same dusty regions are no longer dark in the Webb image, however, as the mid-infrared light from the galaxy has been able to pass through them,” said ESA.

The NASA Webb team played up the “dark and moody” side of the image in a tweet declaring, “Space, but make it goth!” It described the galaxy’s previously hidden structure as its “bones.”

These two very different views of the galaxy highlight how Hubble and the new space telescope can work as a buddy team. Said ESA, “The images complement one another in a remarkable way, each telling us more about IC 5332’s structure and composition.”