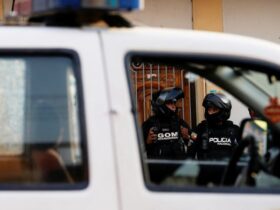 Ecuador vows to regain control of prisons amid wave of violence

Looking for something new to watch between episodes of House of the Dragon and Rings of Power? Maybe you should check out Dark. For my money it’s the best show on Netflix.

A mind-bending show that deftly combines internal family drama with time travel, Dark is the rarest of things: a show without a single dip in quality. All three seasons rule in every way imaginable.

Dark, at its core, is a mystery series. Much like Stranger Things — the show it’s most frequently compared to — Dark’s first season focuses almost exclusively on the search for a missing child. But in this show the child hasn’t escaped to a parallel universe, but a different time 30 years in the past. Before long Dark is a show that operates across multiple time zones and dimensions.

Dark has everything. It does complex, interweaving plot twists on a level that makes Westworld look like a pretend-clever show for children. It earns these twists by also being a delicately written study of broken familial interrelationships and small-town claustrophobia.

It’s a show that juggles the risks that come with time travel narratives with ease. Dark’s plot is complex to the point where I make a sport of waiting for it to completely fall apart. I spent three whole seasons waiting for Dark to drop the ball and collapse beneath its own weight, but it didn’t.

This TV show is a miracle.

Probably the worst thing you could say about Dark is that it’s pretentious. Unlike other time travel shows like, say, Outlander — which revels in camp and sort of begs you to watch ironically — Dark takes itself completely seriously. It’s almost unrelenting.

Dark asks you to sincerely care about what’s happening on-screen. It infuses its plot with multiple explicit references to Ariadne and the Bible. In most science fiction this would be enough to make my eyes detach from their socket and roll all the way backward into my brain, but Dark earns its delusions of grandeur by actually being good enough to sustain them.

Black Lives Matter: Movies and TV show that put racism in the spotlight


You want to pepper your watertight plot, brought to life via dazzling performances and stellar writing with allusions to Greek mythology and classic literature? Who am I to say no? Go for your life.

Perhaps the best part of Dark is that, unlike other so-called “prestige shows,” there’s no dip in quality. No “wilderness” seasons like Lost. Or skippable episodes like Stranger Things. Dark doesn’t rush towards its conclusion like Game of Thrones, or betray years of character building to service plot. No, it calmly and precisely remains extremely good from start to finish. I can’t think of another show like it. At least not on Netflix.

So why the hell is no one talking about it? Why isn’t a show of Dark’s sustained quality trending on Twitter? Why aren’t people getting angry about spoilers or getting into friendship ending debates on Facebook? Dark literally just dropped its stellar concluding season on Netflix and it just feels like no one — not even Netflix itself — has even noticed?

Is it because it’s “complicated”? Maybe. Dark can be hard to follow and 100% expects its audience to remember intricate details of a sprawling family tree that plays out across multiple different timelines.

Is Dark underpromoted compared to other shows on Netflix? Possibly. I did start watching Dark after the first season of Stranger Things. The show does seem to operate in the shadow of more popular shows in the recommendations.

Is it because it’s German? Despite Parasite’s win at the Oscars, I reckon subtitles are still a massive barrier. I can absolutely see a big US network buying the license for Dark and producing a (most likely inferior) version of this show using English-speaking actors.

I mean it’s right there. Three seasons of perfect television, available on a streaming service you most likely already subscribe to. Dark won’t disappoint you, or turn to shit like Game of Thrones. It won’t end unfinished like Deadwood, or make zero sense like Westworld.

Dark is right there. To be talked about, thought about. To be obsessed over. Do yourself a favor and watch it.