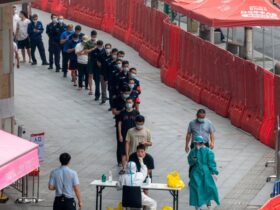 It was far from pretty, but Arsenal edged into the Champions League group stage, a goal from the Super League record scorer Vivianne Miedema earning the team a feisty 1-0 away win against Ajax, 3-2 on aggregate.

The Gunners were forced to play a lengthy period of added time with 10 players after Lisa Doorn crashed into the back of the substitute Beth Mead’s head, forcing her off. The Arsenal manager, Jonas Eidevall, asked for use of a concussion sub but was denied, with Arsenal having used all three of their regulation changes.

The Arsenal captain, Kim Little, had said it was “incredibly important” for the team to qualify. “Our ambition is always as a club to be in the Champions League and progress through it and to be a part of the group stage.”. But the implications of an exit would have gone way beyond the football, with financial incentives improved and the third qualifying spot in the WSL at risk.

There were three changes to the Arsenal team that drew 2-2 in the first leg. The right-back Laura Wienroither and the forwards Katie McCabe and Caitlin Foord, who were all returned to the side for Arsenal’s 4-0 defeat of Tottenham on Saturday, were chosen to start in the south of Amsterdam.

Much like in the reverse fixture, the first half was tightly contested, with Arsenal edging possession but once again struggling to trouble the centre-back duo of Doorn and the 17‑year‑old Isa Kardinaal, despite the terrier-like McCabe and Foord wide of Stina Blackstenius.

The play matched the conditions. A farcical situation presented itself before kick-off, with staff hurriedly adjusting the height of the goals after staff of the visiting side had pointed out a height discrepancy of 10cm that had seemingly gone unnoticed. At half-time the ladder was back out to remeasure the height of the crossbar. “Playing against a big club like Ajax, where we had to measure the goals before the start of the game … I have never experienced anything like it,” Eidevall said afterwards.

With thunder rumbling and rain falling hard, the attempts on target were few at both ends. In the 16th minute Leuchter was played through with only Leah Williamson and the goalkeeper Manuela Zinsberger to beat but the England captain nipped the ball away from the feet of the young forward. Blackstenius had a chance not long after, with Steph Catley’s cross bouncing off her before she was able to collect and get a tame shot away that was smothered by the goalkeeper Lize Kop.

Just past the half-hour mark, Rafaelle Souza went down under a heavy challenge from the Ajax forward Chasity Grant. The defender was eventually replaced by Lotte Wubben-Moy came on in her place in front of the watching England manager, Sarina Wiegman, who, the day before, had dropped the centre-back from the Lionesses squad for the October fixtures against USA and the Czech Republic.

The De Toekomst Stadium was sold out, but while the travelling contingent was small, there were a huge number of Dutch Arsenal fans present for the return of Miedema, the national team’s record goalscorer, to her home country.

Those fans were rewardedearly in the second half, as Miedema drove to the edge of the D before firing low into the bottom corner to put Arssenal in front.

Mead, a surprising omission from the Starting XI, came on and delivered a sumptuous cross shortly after coming on that evaded Wienroither and fell to Foord on the edge of the box, but her effort was blocked. Ajax went close moments later, with Wubben-Moy doing enough to put off Tiny Hoekstra as she stretched to get on to the end of Nadine Noordam’s cross.

As Ajax sought a reply and Arsenal tried to kill the game, Eidevall sprinted up and down his technical area. He was furious when Mead was felled and his team were denied a replacement.

Afterwards, Eidevall said: “I think Uefa removed the concussion sub, they still have the concussion protocol which means the doctor takes the decision. There’s no doubt that Beth needs to be taken off.

“The problem that I have is that I asked the fourth official if we can do a concussion sub and she said yes, and that’s why we are preparing Lina, and then when we are going to do it she says no.

“We had that break for two, three minutes and we could have spent a lot of that time speaking to the players on how we would have defended with 10. So I think that’s misinformation from the referee. I honestly don’t know how and why that can be, because for me it’s just such a simple question to answer yes or no.

“In Sweden – where I come from – in ice hockey it’s very big. If you tackle towards the head they’ve realised how dangerous that is, they are so harsh on penalising violence towards the head. Because that’s not only pain, it can have impact for the rest of your life.

“If that’s not a red card to go towards a head like that – I know she doesn’t mean it – but it’s careless. And in the end it’s carelessness that puts Beth at real risk. I just hope she’s all right.”