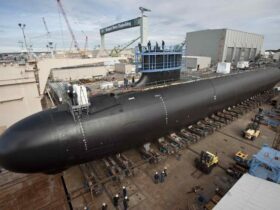 Want some nostalgia with your burger? Get a load of this boo-tiful rumor. As ComicBook.com reports, a site called Nightmare Nostalgia appears to have the inside info about McDonald’s bringing back its Halloween Happy Meal buckets.

McDonald’s hasn’t responded to multiple requests for comment, but look north for a promising sign. On Saturday, the official Twitter account for McDonald’s Canada confirmed that the pails, also called Boo Buckets, are returning to the Great White North.

“Boo Buckets are BACK, and you can be one of the first to get them,” the tweet read in part before describing a contest Canadian customers can enter.

A short video ends with a still image of two Boo Buckets — one green and one orange (no ghostly white shown in the image, hmm). The Canada deal doesn’t mean Boo Buckets are 100% coming to the US, but at this point, we’d bet our fries on it. Read on for more background on this nostalgic news.

What are McDonald’s Halloween buckets?

Back in 1986, McDonald’s started offering its Happy Meal kids meal in cute little Halloween-themed buckets, which can double as a kid’s trick-or-treat pail — if they’re not out for maximum candy, that is. Happy Meals usually come in cardboard boxes shaped kind of like little houses, so the buckets were a spook-tacular treat.

What did the original McDonald’s Halloween buckets look like?

A few years later, McDonald’s added white ghost and green witch designs. They all looked pretty happy — even the supposedly spooky witch. Here they are in an ad from 1990. As the commercial explains, the ghost bucket even glows in the dark. (Don’t think too much about how the Chicken McNuggets are busying themselves making sauce, presumably to be used in their own consumption.)

Nightmare Nostalgia has a wonderful timeline of the history, if you really want to delve into a fast-food chain’s promotional past. (Not knocking you if you do, because I am one of you.) Some of the bigger changes involved a switch to vinyl glow-in-the-dark trick-or-treat bags, called McBoo Bags. In 1992, the buckets were redesigned to include cookie cutters that popped off the top. That had to be a high-water mark for McDonald’s Halloween bucket creativity. Hope somebody got a raise that year.

After that, the pails kept being tweaked, and finally vanished in 2016, going out with a It’s The Great Pumpkin, Charlie Brown, design. So it’s got to be time to bring them back, right? Hello? Anybody listening? Ronald? Grimace? Good grief!

What will the new McDonald’s Halloween buckets look like?

Halloween fans are surely hoping this is a treat and not a trick. A representative from McDonald’s did not respond to repeated requests for comment — leading me to believe the company really wants to keep this news under wraps, if it’s indeed true.

But the reliable snack-news Instagram account markie_devo posted what appears to be a photo of the new buckets. The buckets look to be the ghost, witch and pumpkin variety, so maybe the ghost will once again glow in the dark. Not sure what is going on with those lids, though.

When will the McDonald’s Halloween buckets be available?

Nightmare Nostalgia shared what appears to be a leaked calendar page of McDonald’s events, listing the Halloween pails as arriving on Oct. 18 and running through Halloween, Oct. 31. It also mentions “Halloween Pails” on Oct. 4. Perhaps that’s when the ad campaign will begin and we’ll get notice that this is real? Or when the buckets will ship to restaurants? It’s also McRib day, apparently, so sauce it up.

But without confirmation — and even with the news from McDonald’s Canada — we can’t say for sure that the McDonald’s Halloween buckets are returning, just as Linus could never guarantee the arrival of the Great Pumpkin.

According to YouTuber Consumer Time Capsule, there were six proposed Halloween buckets that were never released, including this purr-fect black cat. Whoa, we missed out on some pop-culture goodness here. There’s also a wonderful McMummy.

How is social media responding?

We can say that certain nostalgic types would love to see this happen. There’s plenty of yearning for these pails on social media.

“But I need to know if McDonalds is bringing back the Halloween buckets because I need them all,” one Twitter user said.