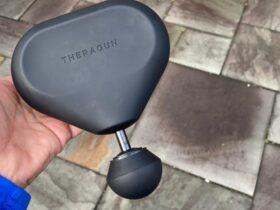 Snag a Compact and Powerful Theragun Mini Massager for $40 Off

“Bringing Mark home has been a top priority for President Biden and his national security team,” the official said.

Haji Bashir Noorzai, a prominent member of the Taliban, who was in prison in the US on drug trafficking charges for 17 years, was granted clemency as part of the deal, the official said.

Frerichs, a Navy veteran from Illinois, was kidnapped in late January 2020 while he was doing construction contract work in Afghanistan. He was believed to be held by the Haqqani network, which is a faction of the Taliban. He was missing for less than a month before the US signed a peace deal with the Taliban.

Frerichs was able to walk on his own onto the aircraft, a source familiar with the matter said, and his physical and mental condition appear good. He is currently in Doha, Qatar.

Frerichs’ family praised Biden for securing his release, with his sister, Charlene Cakora, saying in a statement, “there were some folks arguing against the deal that brought Mark home, but President Biden did what was right. He saved the life of an innocent American veteran.”

“I am so happy to hear that my brother is safe and on his way home to us. Our family has prayed for this each day of the more than 31 months he has been a hostage,” Cakora said. “We never gave up hope that he would survive and come home safely to us.”

US Secretary of State Antony Blinken welcomed Frerichs’s release and committed to working to free other Americans “arbitrarily and unjustly” detained abroad.

“Mark’s soon going to be reunited with his family,” said Blinken before a Freedom of Expression Roundtable at the UN in New York. “The President had an opportunity to speak to them a few hours ago.”

Blinken said the US will “bring the same determination and focus” to freeing other Americans “arbitrarily and unjustly detained” abroad as was done for Frerichs.

“I want the families of Americans who are being arbitrarily detained or held hostage anywhere in the world to know that our commitment to them to bringing their loved ones home is resolute and we will relentlessly continue to focus on doing just that,” Blinken added.

A Taliban spokesman said the swap was secured through a constructive “dialogue” with the US.

“Through dialogue, understanding and interaction, the freedom of Haji Bashar and the release of an American citizen showed that good interaction and goodwill is the most effective way to solve cases,” spokesman of Islamic Emirate of Afghanistan, Zabihullah Mujahid, tweeted. “There can be no progress in relations with Afghans through force and pressure, but on the contrary understanding can do anything.”

Earlier this year, The New Yorker published a video of Frerichs pleading for his release — the first time the Illinois native had been seen in years.

“I’ve been patiently waiting my release,” Frerichs says in the brief video, which he says is being recorded on November 28, 2021.

Since her brother’s kidnapping, Cakora has called on the US government to do more to secure his release, escalating those calls in the lead-up to the US withdrawal from Afghanistan in 2021.
Earlier this year, the Biden administration secured the release of Afghan-American Naval reservist Safi Rauf and his brother Anees Khalil, a US green card holder, who had been detained by the Taliban since December.

The Biden administration undertook months of negotiations with the Taliban to secure Frerichs’ freedom, a senior administration official said Monday, and the President decided in June to grant clemency to Noorzai if it would lead to the captive American’s release.

Speaking on a call with reporters, the official said it became clear that releasing Noorzai was “the key to securing Mark’s overdue freedom,” but the decision on clemency for the Afghan drug trafficker was a “difficult” one.

The administration does not see an equivalency between Noorzai, who was carrying out a 17-year sentence in the US, and Frerichs. Noorzai was not held at Guantanamo Bay, despite reports saying he was, the official said.

“We consulted with experts across the US government, who assessed that Noorzai’s (release) to Afghanistan would not materially change any risk to Americans emanating from the country or the nature of the drug trade there,” the official said.

Weeks after Biden made the decision on Noorzai, the President authorized the strike that killed al Qaeda leader Ayman al-Zawahiri in Kabul.

“As we also said publicly at the time, we told the Taliban immediately after the strike, that we would hold them directly responsible if any harm were to come to Mark, and that the best way they might begin to rebuild trust with the United States, with the world, was to immediately release Mark,” the official said.

The official said the window of opportunity for the swap finally presented itself this month, and the administration “acted very quickly.” But they would not say where Frerichs had been held during his more than two years of captivity, nor would they say if the US had given the Taliban anything else for Frerichs’ release.

A second senior administration official said the US would continue to make clear to the Taliban that they must end hostage taking if they are to gain recognition by the international community.

The first official would not say if the Taliban is holding any other Americans home. They said they were aware of the matter of American filmmaker Ivor Shearer and his producer, who the Committee to Protect Journalists said were detained by the Taliban in August, but did not provide further details.

This story has been updated with additional details.