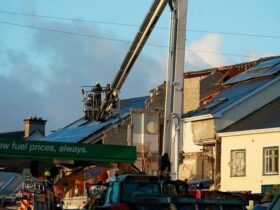 After seven games, 12 days, and countless twists and turns, this helter-skelter T20 tour of Pakistan ended in a 4-3 victory for England. The deciding match, which had been one of the most eagerly anticipated games held here in the last decade did not leave a lot for the local fans to cheer about. Their team lost by 67 runs.

The game was as good as done inside the first few overs of Pakistan’s innings. They had put England in, because they think of themselves as a chasing team. But they lost both openers in the first eight deliveries. Chris Woakes had Babar Azam caught at cover, and two balls later, Reece Topley bowled Mohammad Rizwan.

England’s 209 already felt like a mountain, and this was as if their expedition leaders had stepped out of the tents and fallen straight into the nearest crevasse. Azam and Rizwan together had scored 601 runs at the start of this game, over 200 more than the other 13 Pakistani batsmen had between them. That total looked a very long way away now.

It receded further into the distance when David Willey had Iftikhar Ahmed caught by Phil Salt off the top edge in the sixth over. Willey was especially pleased, since he had already dropped him once off his own bowling. Pakistan were 37 for three at the end of the powerplay, and the match drifted to a conclusion, Shan Masood plodded on to 56 off 43 balls, in an odd and solitary vigil for a long-dead innings.

It was a shame the game ended so tamely. For a time it reached a pitch of intensity not many T20 matches do. It caught light in the 15th over of England’s innings, when Dawid Malan and Harry Brook were together and set. Malan had 42 off 26, Brook 23 off 14, and Azam brought Mohammad Hasnain into the attack. Brook tried to scoop his second ball, which was 91mph, but was beaten by it. Then he tried to scoop his third too, and this time he was hit in the helmet. Hasnain stopped to check on him, then turned back to his mark, and started in again, harder and faster, this time. All of a sudden the match was electric with threat.

The air crackled with the thrill you only get from viciously quick bowling. Malan swayed away from a bouncer, Brook played and missed at another. They only managed to scrape three runs off it. And then Haris Rauf came on at the other end. He lured Brook into hitting a steepling catch to Azam at mid-on, but he dropped it. He had already put down a chance off Malan when he was fielding at cover. Pakistan’s fielding cost them all as much as their batting did later in the match. Rauf served Brook a slower ball, which he missed, and followed through right down the wicket, presumably to tell Brook exactly how impressed he was by his burgeoning reputation.

Azam decided this was the moment to bring Mohammad Wasim into the attack, which was a mistake. England took 14 off Wasim’s over. It was smart batting, the sort of discriminatory violence Moeen Ali has been saying he wants to see from the team.

Then it was back to Hasnain. This time he hit Malan with a ball that ricocheted off his elbow and into his ribs, and left him flat on the ground, winded. He got back to his feet, and then launched a slog sweep for six. Rauf took the 19th over, and had Malan dropped in the deep by the hapless Wasim, who then had to bowl the last over. England knew this was their opportunity. Malan pulled him for one six, Brook punched him for another, in an over that went for 20. His fours overs cost 61, which was seven more than Rauf and Hasnain went for in eight between them. Malan finished on 78 off 47 balls, his highest score of the tour.

He needed it, not least because earlier in the innings he had helped run out Salt. Malan had only just come in, after Hasnain had Alex Hales LBW with another wickedly quick ball. Hasnain hit Malan on the thigh, and Salt came for a leg bye. Malan was so worried about Hasnain’s LBW appeal that by the time he decided to send Salt back again he could almost have tapped him on the nose with his outstretched palm. Salt doubled back the way he came and made a futile dive for the line, while Malan stared at his feet, as if he had only just noticed his shoelaces had come undone.

Ben Duckett was run out too, although Malan was blameless for that one. He played the ball down by his feet, it bounced up past Rizwan, who pulled it down one-handed and whipped the bails off as Duckett lurched forward for a run. These were rare blemishes, though, almost forgotten (at least almost forgotten by everyone except Salt) by the end of what turned out to be one of England’s most authoritative performances this year. By the time it was over, you could hear the crickets singing in the stadium rafters.