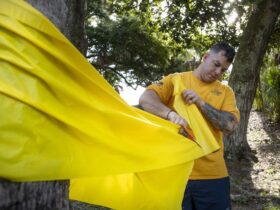 Hengaw Organization for Human Rights, a Norwegian-registered organization monitoring rights violations in Iran, said five people were fatally shot during demonstrations in Iran’s Kurdish region on Monday. It said 75 others were injured in other cities over the weekend.

The UN’s Acting High Commissioner for Human Rights Nada Al-Nashif issued a statement on Tuesday expressing alarm at “the violent response by [Iranian] security forces” to the demonstrations.

Meanwhile, the governor of Tehran, Mohsen Mansouri, accused the protesters of attacking police and destroying public property, claiming in a Twitter post late Monday that the protesters were “fully organized and trained to create disturbances in Tehran.”

CNN was unable to independently verify the reports of the deaths and injuries.

The protests erupted after the death of Amini, a 22-year-old Iranian woman who died in Tehran after being arrested by Iran’s morality police last week.

Iranian officials said that Amini died on Friday after suffering a “heart attack” and falling into a coma following her arrest last Tuesday. However, her family said she did not have a pre-existing heart condition, Emtedad news, an Iranian pro-reform media outlet which claimed to have spoken to Amini’s father, said.

Edited security camera footage released by Iran’s state media appeared to show Amini collapsing at a “re-education” center where she was taken to receive “guidance” on her attire.

Iran’s morality police are part of the country’s law enforcement and are tasked with enforcing the strict social rules of the Islamic Republic, including its dress code that mandates women wear a headscarf, or hijab, in public.

The UN Human Rights Office (OHCHR) said in its Tuesday statement that the morality police have expanded street patrols in recent months and have been subjecting women perceived to be wearing “loose hijab” to verbal and physical harassment and arrest.

“(OHCHR) has received numerous, and verified, videos of violent treatment of women, including slapping women across the face, beating them with batons and throwing them into police vans,” it said.

Al-Nashif said Amini’s death and the allegations of torture and ill-treatment must be “promptly, impartially and effectively investigated by an independent competent authority.”

Iranian police said Amini’s death was an “unfortunate incident” and denied that she was physically harmed while in custody, Iran’s semi-official news agency Fars News said on Monday.

Iranian officials said they have conducted an autopsy on Amini’s body. Speaking Saturday on state TV the director of Iran’s Forensic Medical Organization, Mehdi Forozesh, said the results would be publicized after further examination by medical experts.

Speaking at a news conference on Monday, Greater Tehran Police Commander Hossein Rahimi said police had “done everything” to keep her alive.

But the explanations from the police were not accepted by protesters. The UN said thousands of people have taken to the streets in cities including Tehran, Isfahan, Karaj, Mashhad, Rasht, Saqqes and Sanandaj to demand justice and accountability.

The semi-official news agency Fars reported the protesters were “not convinced” by the police’s justification of Amini’s death and claimed she died “under torture.”

Fars also published a video showing protestors demonstrating in the capital of Kurdistan province, Sanandaj, late on Sunday and chanting slogans against officials.

One video shared by the Free Union of Iranian Workers showed protesters in Sanandaj chanting “death to dictator.” Another video showed women taking off their hijabs and waving them in protest in Tehran.

Separately, the internet watchdog NetBlocks said on Monday that its real-time data were showing a “near-total disruption to internet connectivity in Sanandaj.”