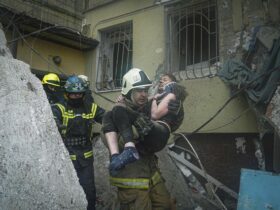 The person died from injuries sustained on Thursday in Urmia city in northwest Iran, Iranian state news agency IRNA said. Other members of Basij, a paramilitary organization connected to the powerful Islamic Revolutionary Guard Corps (IRGC), have been killed in Qazvin, Tabriz, Mashhad and Qouchan.

The protests have been sparked by the death of Mahsa Amini, a 22-year-old Kurdish Iranian woman detained by morality police on September 13 accused of violating the country’s conservative dress code.

Since Friday, demonstrations have taken place in at least 40 cities nationwide, including the capital Tehran, with protesters demanding an end to violence and discrimination against women as well as an end to compulsory wearing of the hijab.

At least 35 people have died in Iran in recent protests over the death of Amini, state media outlet the Islamic Republic of Iran Broadcasting (IRIB) said late on Friday.

Amnesty International previously said that 30 people had died. CNN cannot independently verify the death toll — a precise figure is impossible for anyone outside the Iranian government to confirm — and different estimates have been given by opposition groups, international rights organizations and local journalists.

At least 1,200 people have been arrested in connection with the wave of protests, Iranian state-backed news agency Tasmin reported Saturday, citing a security official. The IRGC has accused the protesters of “rioting” and “vandalism,” and called on the police to “protect the security of the nation.”

At least 17 journalists have been arrested in Iran as anti-state protests spread across the country, according to a report from the Committee to Protect Journalists (CPJ), a non-profit that monitors press freedom.

Iranian authorities say they will restrict internet access in the country until calm is restored to the streets. Meanwhile, the IRGC, the elite wing of the Iranian military that was established in the aftermath of the country’s revolution in 1979, has asked all people to identify protesters, the country’s semi-official news agency Fars News said.

On Sunday, hundreds of thousands of Iranians held pro-government rallies in many cities in Iran to condemn the recent unrest, state news IRNA reported.

People took to the streets in many cities and towns, including the holy city of Mashhad, the northwestern city of Qazvin, the central city of Esfahan as well as the western cities of Hamedan and Yasuj, to show their “unity and outrage over the recent acts of sabotage perpetrated by rioters,” state news added.

According to Press TV, the demonstrators “condemned the crimes and evil acts committed by a handful of mercenaries serving foreign enemies, who set fire to the Holy Qur’an, mosques, and the national flags and forcefully removed women’s headscarves on the streets.”

Authorities hope that by restricting the internet they can control the protests — the latest in a wave that has swept Iran in recent years. They started with the Green movement in 2009 over contested election results and more recently the 2019 protests sparked by a rise in fuel prices. Hundreds were believed to have been killed in the violent crackdown three years ago and thousands injured, according to estimates released by the UN and rights groups.

But this year’s protests are different — in their scope, scale and unprecedented feminist nature. There is also mobilization across the socio-economic divide. A young generation of Iranians are rising up on the streets against decades of repression — arguably bolder than ever.

The demonstrations have spread to dozens of Iranian cities, from the Kurdish region in the northwest, to the capital Tehran and even more traditionally conservative cities like Mashhad.

While they were ignited by the death of Amini, the initial calls for accountability have turned into demands for more rights and freedoms, especially for women who for decades since the 1979 Islamic Revolution have faced discrimination and severe restrictions on their rights.

But calls for regime change are growing too. People across the country are chanting for “death to the dictator,” in a reference to the Supreme Leader, tearing down portraits of Ayatollah Ali Khamenei. Remarkable images emerged on Friday night from Khamenei’s birthplace in the city of Mashhad, where protesters set fire to the statue of a man considered one of the symbols of the Islamic Revolution. Such scenes were unthinkable in the past.

This is all happening at a time when Iran’s hardline leadership is under growing pressure with talks to revive the stalled 2015 nuclear agreement and the state of the economy under US sanctions; ordinary Iranians are struggling to cope with soaring levels of inflation.

While these protests are the biggest challenge for the government for years, analysts believe the government will likely move to contain them by resorting to the heavy-handed tactics it has used in the past. There are signs a brutal crackdown is coming, along with the internet restrictions on a level not seen since 2019. Other measures include the government mobilizing its supporters in mass rallies following Friday prayers; officials dismissing the demonstrators as rioters and foreign agents, and ominous warnings the army and powerful Iranian Revolutionary Guard Corps will be deployed to deal with the protests.