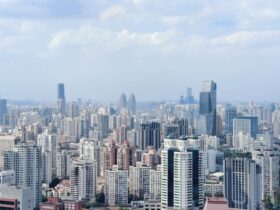 Germany’s leader and top CEOs are flying into Beijing. They need China more than ever

The International Chess Federation (FIDE) reprimanded former world champion Magnus Carlsen for resigning from an online chess match against fellow grandmaster Hans Niemann after just one move but added that it shared the world No.1’s “deep concerns about the damage that cheating brings to chess.”

“We strongly believe that there were better ways to handle this situation,” FIDE said in a statement released on Friday.

“The World Champion has a moral responsibility attached to his status, since he is viewed as a global ambassador of the game. His actions impact the reputation of his colleagues, sportive results, and eventually can be damaging to our game.”

The two players were participating in the Julius Baer Generation Cup on Monday when Carlsen turned off his screen and left the match without explanation.

Earlier this month, the Norwegian withdrew from the Sinquefield Cup in Saint Louis following his surprise defeat against American star Niemann – the first time he has withdrawn from a tournament in his career, according to chess24.

Another grandmaster, Hikaru Nakamura, said Carlsen is “suspicious” of Niemann’s conduct, and days after the Sinquefield Cup match, Niemann publicly responded to allegations that he had cheated earlier in his chess career.

Niemann admitted to cheating at the ages of 12 and 16 but said in an interview with the St. Louis Chess Club he had never cheated in over-the-board games.

“I’m saying my truth because I do not want any misrepresentation,” said Niemann. “I am proud of myself that I have learned from that mistake, and now I have given everything to chess. I have sacrificed everything for chess.”

Neither of these tournaments were under FIDE’s jurisdiction but the organization said “it is our duty to protect the integrity of the game and its image, and in view that the incident keeps escalating, we find it necessary to take a step forward.”

FIDE announced that it was “prepared to task its Fair Play commission with a thorough investigation of the incident, when the adequate initial proof is provided and all parties involved disclose the information at their disposal.”

“We are fully aware that, in some cases, uncertainty can harm players’ performance,” the statement continued. “It also can be damaging to a player’s reputation – that’s why we insist on the anti-cheating protocols to be followed.”

CNN has reached out to FIDE for further clarification about the statement.

Carlsen has not made any explicit allegations of cheating against Niemann who denies any wrongdoing.

“Unfortunately, I cannot particularly speak on that but people can draw their own conclusions and they certainly have,” he said in an interview posted on his verified YouTube channel on Wednesday.

“I have to say I’m very impressed by Niemann’s play and I think his mentor Maxim Dlugy must be doing a great job.”

“I will not comment on that,” Carlsen added when asked directly if he withdrew from the Julius Baer Generation Cup due to the cheating allegations. “I hope to say a little bit more after the tournament.”

CNN has this week reached out to Carlsen and Niemann for comment but has yet to receive a response.

FIDE said it shared Carlsen’s “deep concerns about the damage that cheating brings to chess” and called for further cooperation between major online platforms, private events and top players.

“It is our hope that this whole situation could have a long-term positive effect, if tackled properly,” FIDE’s statement added, proposing a dedicated Panel composed of Grandmasters, anti-cheating experts, FIDE officers and representatives of leading chess platforms to mitigate any future risk of cheating.