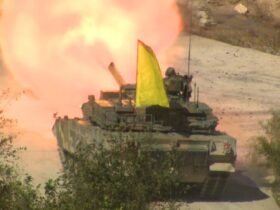 This story is part of Welcome to Mars, our series exploring the red planet.

NASA, cats and Mars. Three of my favorite things have come together in one amusing image beamed back from the red planet. So it’s with great delight I introduce you to what I’m calling “cat loaf rock” on Mars.

Cat lovers know one of the cutest feline chill-out positions is the loaf. That’s when a cat has its legs tucked under it, tail hidden away, like a loaf of bread with a head. NASA’s Perseverance rover snapped the rock in Jezero Crater on Sept. 8 using one of its mast-mounted cameras. NASA puts the rover’s raw images online for perusal and this one was chosen by Mars fans as an image of the week worthy of special note.

The angle of the photo combined with the way the shadows fall highlight two pointy ear-like features on the rock’s “head” and a long, loaf-like “body.” At another angle or another time of day, this might have looked like any old lumpy Martian rock, but instead it looks like a chubby-cheeked Persian cat having a quiet moment.

If this were a real cat, then we might have an explanation for a curious thread-like piece of debris that recently got stuck in the rover’s rock-sampling equipment. NASA investigated the debris and cleared the rover to continue traveling in August.

The phenomenon of pareidolia (the human tendency to spot familiar objects in random shapes) runs rampant when it comes to Martian rocks. Perseverance landed in early 2021, but has already spotted its share of goofy formations, from a butt crack to a reclining “alien figure.”

At least the cat rock will have something to snack on. The Curiosity rover once snapped a fish-shaped rock. These rocks are just fun shapes for our imaginations to play with. We have yet to find proof of life, ancient or current, on the red planet. So any cats on Mars would have to travel to get there. Knowing cats, they’d much rather loaf around on Earth.