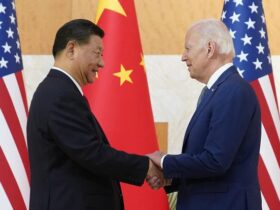 Biden, Xi Seek to ‘Manage Our Differences’ in Meeting

Loris Karius has made a surprise return to the Premier League after joining Newcastle United on a deal until January.

The 29-year-old German goalkeeper had been without a club since leaving Liverpool at the end of last season but the torn ankle ligaments sustained recently by Karl Darlow, Newcastle’s second-choice goalkeeper, dictated Eddie Howe needed to sign cover for England’s Nick Pope.

With Darlow expected to be sidelined until some point in November Karius has a chance to establish himself as Pope’s understudy and convince Newcastle’s manager to activate an option to extend his contract until the end of the season.

The goalkeeper deemed at fault for two of Real Madrid’s goals as they beat Liverpool in the 2018 Champions League final in Kyiv subsequently lost his place at Anfield and has, most recently, endured a couple of rather mixed loan spells in Turkey and Germany with Besiktas and Union Berlin respectively.

Howe though is delighted to welcome him to St James’ Park. “Loris is a very good goalkeeper with Premier League and European experience,” he said. “He will provide competition and support at a very important part of the season.”

Karius seemed equally happy to be on Tyneside. “I’m excited,” said a keeper who received death threats after that ill fated night in Ukraine four years ago. “It’s a good opportunity for me to join a great project and be part of it. Newcastle have a great head coach and play really attractive football.”