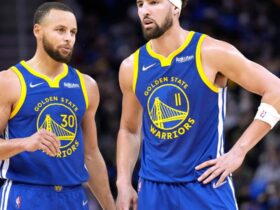 NBA Opening Night: How to Watch 76ers vs. Celtics, Lakers vs. Warriors on TNT

Off go the elite women!

Paula Radcliffe fancies Bashir Abdi and Sisay Lemma in the men’s race. I wonder who the latter’s favourite poet is.

In comms, Steve Cram and Tanni Grey-Thompson discuss the much-improved prize money on offer, now close to that being received by able-bodied athletes. Great stuff

Jill Scott, Leah Williamson and Ellen White get our wheelchair athletes away!

Ah, BBC are showing us VT of the Weirwolf. What an inspiration he is. Oh, and I’ve just learnt he’s 43, which I may or may not also be. For avoidance of doubt, I have neither run 23 straight races nor won eight of them.

So we’re six minutes away from the start and in that first group will be David Weir, competing in his 23rd consecutive London Marathon. That is astounding behaviour, and has yielded eight victories – more than anyone else – and I’m certain he’ll be gunning to make it nine today.

Gabby Logan has just interviewed a chap by the name of Andy Farrer, whose girlfriend killed herself six years ago. He took up extreme ironing and now runs with a board to inspire questions and get people talking about mental health; he also has the teddy she was holding when she died, noting that he’d die for it. I am gone.

No doubt loads of you have run the marathon before – do send in your anecdotes to share with the group. I went to see someone once, he was injured, in agony, and in his headphones and sunglasses had not a clue we were there. Apologies, the film rights have already been optioned.

A bit more on Bekele.

My outside bet to win: my editor and Guardian Sport legend, James Dart. Should circumstances conspire against him, though, he’ll still be raising money for Children’s Hospice South West. You know what to do.

Morning all! Anyone for 26 miles 385 yards? No? Good. Luckily for us, though, some hardy folk are into precisely that, prostrating their pain for our entertainment lest we pass an hour or two of weekend with no live sport. Off they go, so off we go.

Sadly, any preview of the men’s competition begins with who’s not here: well, sort of. Eliud Kipchoge, who broke the world record last week in Berlin, isn’t racing, which isn’t ideal, but is handing out mini-marathon medals, which is great. And maybe his lack of running will turn out to be a good thing, because this might just be the last time we see the great Kenenisa Bekele run. It seems unlikely he’ll trouble the podium, but with a genius of his aspect, well, who knows.

Meantime, the women’s marathon will be a belter. We’ve seven competitors with lifetime bests under 2 hours and 19 minutes, and Joyciline Jepkosgei, last term’s champion is favourite. But Yalemzerf Yehualaw, Ashete Bekere and Judith Korir can also do absolutely ludicrous stuff beyond all of our comprehensions, so let’s see how that one goes too.