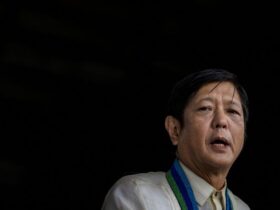 South China Sea: Philippines will explore for oil even if no deal with Beijing, Marcos says

Premier League: Robert Sanchez comes for a Trent Alexander-Arnold cross, fails to make contact with the ball and it ricochets over the line off the hapless Adam Webster. Liverpool lead having been 2-0 down.

Championship: Jake Livermore has scored his first goal in aeons to equalise for West Brom against Swansea City at the Hawthorns, while Tyrese Dolan has fired Balckburn into a one-goal lead against Millwall at Ewood Park.

Premier League: Bobby Firmino scores his second of the afternoon to bring Liverpool level after their two early setbacks at Anfield.

Championship: Nathan Tella scores with a tap-in to put Burnley a goal up at Cardiff City.

Premier League: They’ve gone goal crazy at St Mary’s, where Dwight McNeil has scored with a cracking shot after good work by Demarai Gray to put Everton 2-1 up.

Premier League: Joe Aribo scores his second goal for Southampton to give them a one-goal lead early in the second half. He collected a cross from Che Adams and fired past Jordan Pickford, who is back in goal for Everton today after a spell on the sidelines with injury.

Fulham 0-3 Newcastle: It’s been a disastrous afternoon so far for Fulham, who lost Nathaniel Chalobah to an early red card, are 3-0 down and also lost their in-form Serbian striker Aleksandar Mitrovic to an ankle injury in the first half. He limped off in the 37th minute.

Apologies to Arsenal and Tottenham fans! Due to human error, specifically this human’s error, I had the result from the Emirates down as a 1-1 draw when in fact Arsenal ran out fairly easy 3-1 winners. That’s been amended.

Crystal Palace 1-1 Chelsea: Palace right-back Nathanial Clyne has been stretchered off with what looks like quite a serious injury. He’s replaced by James Tomkins, who has just returned from a spell on the sidelines himself.

Premier League: Sean Longstaff finishes after Fulham goalkeeper Bernd Leno had tipped a shot on to the bar and full time, let alone half-time, can’t come quickly enough for the hosts, who have been down to 10 men since the fourth minute.

Premier League: Getting on the end of a Thiago Silva knockdown, Pierre-Emerick Aubameyang shoots on the turn to drill home and restore parity for Chelsea at Selhurst Park.

Premier League: Bruno Guimaraes and Miggy Almiron team up to pile the hurt on 10-man Fulham. Newcastle are looking good for their second league win of the season.

Premier League: Roberto Firmino pulls a goal back for Liverpool after being teed up by Mo Salah but endures an agonising wait to discover if he was onside. VAR computer says yes.

Bournenouth 0-0 Brentford: There has been a pitchside VAR check for a possible Kristoffer Ajer foul on Bournemouth’s Jordan Zemura but referee Thomas Bramell sticks with his original decision not to award a penalty. That seems like a bit of a let-off for Brentford.

Championship: On loan at QPR from Leeds United, Tyler Roberts has made it 2-0 for QPR at Bristol City.

Championship: Stefan Johansen gives QPR the lead against Bristol City at Ashton Gate. ELsewhere in the second tier, Wigan lead away from home at Rotherham, Norwich lead Blackpool courtesy of a Teemu Pukki goal, Coventry lead Middlesbrough by the only of what is only their second home game of the season and Swansea City are a goal up away at West Brom.

Premier League: Crikey! Brighton capitalise on a rick from Trent Alexander-Arnold and Leandro Trossard scores his second goal of the game to put them two up at Anfield.

Premier League: An afternoon that started badly for Fulham is going quickly downhill. Callum Wilson has just given Newcastle the lead but his goal is currently the subject of a lengthy VAR review for a possible Joe Willock offside in the build-up. It should stand.

Crystal Palace 1-0 Chelsea: In for the injured Edouard Mendy, Chelsea goalkeeper Kepa saves brilliantly from Eberchi Eze to prevent his side going two down.

Fulham v Newcastle: After a conultation with his VAR Mike Dean, followed by a look at the pitchside monitor, Darren England overturns the yellow card he’d just shown Nathaniel Chalobah for a nasty challenge on Sean Longstaff and shows him a red one instead. Fulham are down to 10 men.

Premier League: Jordan Ayew’s cross is converted by Odsonne Edouard, who fires into the top corner to give Palace the lead against the early run of play.

Championship: Matthew Sorinola has capitalised on an error from West Brom goalkeeper David Button to put Swansea City a goal up at The Hawthorns.

Premier League: It’s a dream start at Anfield for new Brighton manager Roberto Di Zerbi, who has just seen Leandro Trossard fire his team in front with a low shot into the corner after four minutes.

Our three o’clock kick-offs are under way: And we’re still waiting for our opening goal of the afternoon. Chelsea are dominating Crystal Palace early doors and Raheem Sterling has already had a shot saved.

Premier League: “New season, same scoreline, tantalising prospects. Just over a year ago Arsenal blew Tottenham away here and, while the outcome was in doubt for slightly longer this time, they were no less worth the margin of victory in doing it all again,” writes Nick Ames from the Emirates Stadium.

Gabriel Jesus: The Arsenal striker has been chatting to BT Sport following his team’s win over Tottenham Hotspur. “To be honest it’s the second time I scored in a derby,” he tells Des Kelly. “The first was for Brazil against Argentina. I’m very happy, I want to score in every game and the way team played from the first minute showed how we wanted to play. We deserved to win, I don’t know how many chances we created. I am feeling at home from the first day because of the guys, the staff, the club and it’s helped a lot. I’m really happy here and we are in a good way.”

Meanwhile in Scotland: Antonio Kolak scored twice as Rangers swatted Hearts aside 4-0 at Tynecastle on a busy day of Scottish Premiership action.

“Game of the day is at Tannadice where Dundee United host St. Johnstone in Liam Fox’s first game as permanent manager after recording a win, draw and defeat as caretaker since taking over after the ill-fated ‘Jack Ross era’, which lasted all of seven games,” writes Simon McMahon. “United looking for their first league win of the season, and could move off the bottom of the table with three points, if Aberdeen beat Kilmarnock at Pitoddrie.”

Liverpool v Brighton: Liverpool captain Jordan Henderson starts his first match in over a month as Jurgen Klopp makes allowances for the exertions of the international break. Luis Diaz, Darwin Nunez and Diogo Jota are all on the bench, with Fabio Carvalho and Roberto Firmino starting up front alongside Mohamed Salah. Kostas Tsimikas comes in at left-back for the injured Andy Robertson.

New Brighton boss Roberto De Zerbi makes only one change for his first match in charge. Pervis Estupinan starts in place of Enock Mwepu, who is ill.

Premier League: Goals from Thomas Partey, Gabriel Jesus and Granit Xhaka helped Arsenal to a convincing victory over a Tottenham Hotspur side who were reduced to 10 men in the second half. The Gunners extend their lead at the top of the table to four points with seven wins out of eight.

Jordan Pickford returns from a thigh injury to start for Everton at St Mary’s. Captain Seamus Coleman also gets the nod along with Dwight McNeil, while Anthony Gordon is out through illness, but well enough to take a place on the bench.

Crystal Palace v Chelsea: James Tomkins is back in Patrick Vieira’s squad after missing the beginning of the season with a calf injury and starts on the bench. John-Kymani Gordon, who scored a hat-trick in Palace U21s 7-3 win over PSG’s U21s on Wednesday, also earns a first-team call-up.

Premier League: There’s been a red card at the Emirates, but for who Scott Murray?

Premier League: Gabriel Jesus has capitalised on a Hugo Lloris error to put Arsenal back in front early in the second half. Follow the action with Scott Murray …

West Ham v Wolves: “West Ham sit 18th after taking four points from their first seven games of this season and are flirting with danger,” writes Jacob Steinberg. “The goals have dried up, a sturdy defence has become leaky, and although the notion that Moyes could be under threat may seem absurd he will be on shaky ground if results remain disappointing up to the World Cup.”

With the international break in the rear view mirror and the World Cup looming on the horizon, a jam-packed October schedule begins with a fascinating afternoon’s action. Arsenal and Tottenham Hotspur got proceedings under way at the Emirates in the first North Lond derby of the season, where the sides are level at one goal apiece at half-time after a Harry Kane penalty cancelled out Thomas Partey’s opener.

Later on, Roberto De Zerbi faces one of the stiffest top flight tests imaginable when he attempts to mastermind victory over Liverpool at Anfield in his first match in charge of Brighton. Meanwhile in London, Fulham will hope to continue their good start to the season against a Newcastle side looking for their first win since the opening day of the season, while Graham Potter takes charge of his Chelsea for the first time in the Premier League at Crystal Palace.

On the south coast, Bournemouth host Brentford in the first ever top flight match between the two side, while Southampton entertain Everton at St Mary’s in today’s other three o’clock kick-off. Later this afternoon, West Ham will attempt to jump-start their season when they take on Wolves at the London Stadium. We’ll bring you line-ups, news of all the goals as they go in and keep a roving eye on proceedings in the EFL.