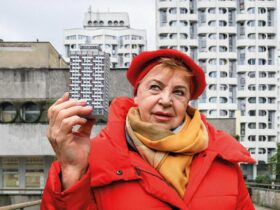 What is it like living in Soviet-era housing today?

The final day of the County Championship season left nails chewed down to the nub and hearts racing as a remarkable nine-wicket performance from Liam Norwell saw Warwickshire pull off the great escape and send Yorkshire tumbling into Division Two.

Defending just 139 runs against Hampshire under ominous skies at Edgbaston, second-bottom Warwickshire found themselves on the brink of becoming the fifth side in the era of promotion and relegation to follow winning the County Championship with the drop. As their head coach, Mark Robinson, later put it: “We needed snookers.”

Norwell had other ideas, his career-best figures of nine for 62 from 19 lung-busting overs sealing a staggering five-run victory that meant the trap door was dodged by a margin of three points. As well as those present, the denouement was watched by 16,000 more spectators online and, by nudging his side up to eighth in the table, the fast bowler broke the hearts of those doing so at Headingley.

“I just went mad – all the emotions came out,” said Norwell, visibly broken by his efforts, when asked to describe the winning moment. It came by trapping the No 11 Mohammad Abbas lbw for a four-ball duck, with Hampshire bowled out for 133 in 43.5 overs and forced to settle for third place behind Lancashire and champions Surrey.

This was only Norwell’s fourth match of a season blighted by injuries and one which, after a recent elbow problem, saw him given a “10% chance” of playing only to push through the pain. The 30-year-old was also on England’s reserve list for their Test tour of the Caribbean back in March, only to spend a month in hospital when his newborn son caught meningitis and cricket very much became secondary.

All was mercifully fine in that regard and now his maddening summer – one which left him feeling he had let his teammates down through those absences – has ended with hero status after bullocking through Hampshire’s impressive lineup, stumps flying in all directions. When the Brummies talk about “Norwell’s match” in years to come, they won’t need reminding which one. This was electric.

It was Oliver Hannon-Dalby, formerly of Yorkshire, who started the charge after Dom Sibley, in his last outing for Warwickshire before a move to Surrey, made 77 during a trolley dash for second innings runs. Removing Felix Organ caught behind in the third over of the 72 remaining, it took Hannon-Dalby to 53 wickets for the season, a fine return for an ever-present seamer who has given his all in a faltering campaign.

But thereafter, with first change Henry Brookes struggling, it was chiefly Norwell, his herculean effort from the Pavilion End featuring a mere three-over break in the middle. “I tried to take myself off after the wicket of Keith Barker,” he said. “I was cramping but Will Rhodes, our captain, said – and I won’t use the language – you’re bowling to the end of the game. Him and Dom Sibley just kept pumping me up.”

Barker, a title winner with Warwickshire in 2012, was the seventh wicket to fall, bowled with 48 runs still required. But the key strike was that of Nick Gubbins, whose 46 had taken Hampshire to within 15 of the target only to fall lbw to the first delivery after a ball change. It looked a dubious decision but the Bears cared little, Norwell then castling James Fuller before the removal of Abbas sent Yorkshire into the abyss.

The precise nature of Yorkshire’s relegation – and that of bottom side Gloucestershire – is still to be confirmed. Firstly, it is not yet known whether this is a double-whammy; after all, should Andrew Strauss’s plan be agreed for 2024, entry into the slimmed down top division of six would logically take at least two seasons to achieve.

No promotion would turn Division Two into a zombified second tier for a summer but nothing is decided. Under pressure from the England and Wales Cricket Board, the 18 first-class counties must agree on the future domestic structure soon, however, with a notional deadline of late November when next year’s fixtures are due to be released.

Whichever way this goes, there is also the unresolved question of whether embattled Yorkshire will start next season with a points deduction. The White Rose are still to face the Cricket Discipline Commission and a charge of bringing the game into disrepute over their handling of Azeem Rafiq’s allegations of racism.

There have been indications that the current regime will accept this charge (something those previously at the Headingley helm certainly do not). A decision is still weeks away but one points deduction was handed out on the final day when the CDC announced Durham had been docked 10 for Nic Maddinson’s use of an over-sized bat against Derbyshire. It did not affect their sixth-place finish in Division Two.

Known for certain, at least, is that Nottinghamshire and Middlesex are the teams heading in the other direction. Notts go up as champions after crushing Durham by 462 runs at Trent Bridge, with Middlesex securing second place ahead of Glamorgan with a draw when their final day at Worcestershire was washed out.