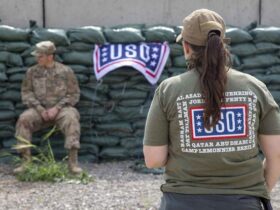 USOs Across the Country Are Mysteriously Shutting Down

I like cheap laptops. More accurately, I like good cheap laptops… but those can be hard to find. For every hundred bucks that gets trimmed off a laptop’s price, its features, design and performance all typically take a hit. But when I find one that rises above Black Friday doorbuster level, it’s something to cheer about.

If you need a budget laptop that looks decent, has a passable keyboard, is small enough to go anywhere and is flexible enough to double as a video-streaming tablet, then check out the Lenovo Duet Chromebook. It’s not especially fast, and the touchpad isn’t great, but it’s still one of the best computers you can buy for under $400. Just note that it makes a better secondary or travel laptop than a primary device — which is something I’d say about almost any 11-inch laptop.

Currently selling for $379, this is an 11-inch ChromeOS tablet with a keyboard cover and kickstand. That means it can work as a standalone touchscreen tablet, or as a clamshell-like notebook. In that way, it’s kind of like a cheaper Microsoft Surface 2-in-1. The version tested here has 64GB of eMMC storage, but the model in stores right now has 128GB, which is a plus.

Microsoft already makes a budget Surface, the most-recent version of which is called the Surface Go 3. It’s $400 and runs Windows instead of ChromeOS, and has an Intel processor instead of the Snapdragon 7c here. But the biggest practical difference to me is that the Lenovo Duet includes its pretty darn good keyboard cover in the box, while Microsoft forces you to buy its keyboard cover for an extra $100 to $129, depending on the color. When shopping at this end of the budget pool, a 25% premium to get the keyboard (which is a must-have) makes a big difference.

As a Chromebook, the Duet is less capable than a Windows device in some respects, but as modern Chromebooks can run almost any Android app, the use cases where this would make a real difference to you continue to narrow. And head-to-head, a sub-$500 computer running ChromeOS is usually going to feel speedier and more responsive than a similarly priced Windows PC, because of the lighter OS.

I’ve always said the keyboard cover design and build quality are the best things about the Surface line, and that’s true for the Lenovo Duet as well. The Lenovo keyboard is similarly solid, not flimsy like some other clip-on keyboards, and its smallish keys have excellent depth and a satisfying clacky feel. The tiny touchpad, in contrast, is the single most annoying thing about this system — it’s usable, but doesn’t feel as accurate or responsive as I’d like.

Here’s a quick ChromeOS trackpad tip. If you want to get a more familiar Windows-like feel, jump into the system settings, located at Settings > Device > Touchpad, and make sure tap-to-click and tap dragging are both enabled.

For occasional long-form typing, I could get by with this keyboard cover. But for serious editing, which requires navigating all around a document with the touchpad, it wasn’t fun. But honestly that’s asking a lot from such an inexpensive device.

Unlike the Surface line, which has an excellent built-in kickstand, the kickstand here is a separate back cover piece that magnetically snaps onto the back of the system, and matches the aesthetic of the keyboard cover. You can take it off for a really stripped-down slate look, but I don’t know why you’d bother.

The display is another strong point, with a 2,000×1,200 screen resolution and an 11-inch (really 10.9-inch) screen. Lenovo also makes a larger 13-inch Duet with an even better OLED display that’s often on sale for under $500, and that’s worth a look if you need something larger. The IPS touchscreen here was more than acceptable for video streaming and productivity, with a max brightness of 400 nits.

Since it’s so small and light, less than 1.2 pounds with just the screen (or just over 2 pounds with the keyboard and back cover), this is great for holding one-handed in landscape mode for extended reading sessions.

As a performer… well, this isn’t on the speedy side, even among recent Chromebooks. I definitely felt it when hitting a dozen or more open tabs in the Chrome browser. In benchmark tests, it was middle of the pack.

Still, running Android apps should be fine, as the Qualcomm Snapdragon CPU here is similar to what you might find in some phones. From the Google Play store, I tried a couple of recent Android games with decent graphics, including Diablo Immortal. The free-to-play action RPG played fine, but was restricted to lower in-game graphics settings, including a 30fps versus 60fps frame rate.

I also tried cloud gaming via Xbox Cloud Gaming. For that, I played via the Chrome browser. If you have a solid internet connection, it can be a very satisfying alternative to downloaded games, and cloud gaming is only going to become more and more mainstream. In this particular case, I had trouble getting my Bluetooth controller recognized by the Xbox cloud gaming app, so I hardwired my controller via USB-C.

You still run into occasional compatibility issues with Chromebooks. While most apps and cloud services here worked as expected, I couldn’t get Adobe’s beta cloud version of Photoshop to run, instead getting an incompatible browser message.

And while I like the Duet overall, there are a few other things that might be a dealbreaker for you. The keyboard cover is included, but a stylus is not. Any USI pen will do, and there’s a rubber holder that snaps into the back cover if you decide to get the official Lenovo version, which is $35.

You’ve only got two USB-C ports for charging, which can be limiting (but it’s also the same as a MacBook Air). And potentially most important, there’s no headphone/audio jack.

If those flaws aren’t fatal, the Lenovo Duet 3 makes a great second or travel laptop. I’d be hard-pressed to use it as an all-day, every day device – but if I only wanted to spend $400 on a laptop, I’d also be hard-pressed to think of an overall better option.

The review process for laptops, desktops, tablets and other computer-like devices consists of two parts: performance testing under controlled conditions in the CNET Labs and extensive hands-on use by our expert reviewers. This includes evaluating a device’s aesthetics, ergonomics and features. A final review verdict is a combination of both those objective and subjective judgments.

The list of benchmarking software we use changes over time as the devices we test evolve. The most important core tests we’re currently running on every compatible computer include: Primate Labs Geekbench 5, Cinebench R23, PCMark 10 and 3DMark Fire Strike Ultra. ChromeOS systems run browser-based tests like Jetstream and Google Octane.

A more detailed description of each benchmark and how we use it can be found in our How We Test Computers page.

The best laptops in every category