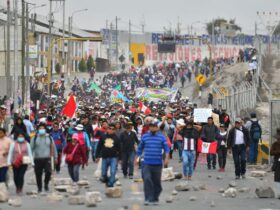 Jorge Vilda has insisted he will not step down as coach of the Spanish women’s national team after leaving the 15 internationals who staged a mutiny out of the squad for this month’s meetings with Sweden and the USA.

Vilda accused the players who led the rebellion of being “poorly advised” and refused to offer them a way back, just eight months before the World Cup. He said he was “deeply hurt”, would “not wish on anyone what I have gone through”, accused them of failing to explain why they wanted him out, and challenged any of the footballers he has worked with throughout his career to step forward if they have any accusations of inappropriate behaviour against him.

The crisis exploded last Thursday when 15 players declared themselves unavailable for selection, alleging that the “situation” within the national team was having a negative impact on their “emotional state” and their “health”. Although a subsequent statement from the players insisted that they had not called for Vilda to resign, they had become unhappy with his methods and group management and had told the national federation and the coach himself that three weeks earlier.

Six Barcelona players, two from Manchester United and two from Manchester City were among the players who sent identical emails to the federation. They were then supported by the Ballon d’Or winner Alexia Putellas, who is currently injured. The federation responded with a statement in which they said the players would not return to the national team unless they “admit their error and apologise”, which they did not. On Friday, Vilda named a squad with none of them in.

The head coach repeatedly said he was open to dialogue but in an almost hour-long press conference he insisted that he would now build a “new” national team with those players who are “committed” to the national team. Vilda repeatedly demanded “respect” for the players who had not joined the rebellion, saying: “No one should think that the players who are joining the national team now are doing anything wrong,” but never extended that to those that had. Indeed, he pointedly avoided an invitation to do so. “There are 70,000 [female] players in Spain,” he said.

Vilda accused the players who declared themselves not in a position to join the national team and claimed that their health had been affected of not explaining their motives clearly, which, he said, had given rise to speculation about his behaviour, with many concluding that something very serious must have happened behind the scenes for the players to have reached this point.

“When I read their statement I felt confused because I don’t really know what they are demanding: I would have liked them to have spoken clearly,” Vilda said. “I wouldn’t wish this on anyone. The lack of clarity in the players’ messages, both here and in their statements has allowed for doubts. That has opened up the idea that there must be something non-sporting in all this – and that’s normal because none of this makes sense if that’s not the case.

“I call on all those players that I have ever worked with – the captains have said the treatment has been exquisite – to come out and say there was ever a lack of respect or with any complaint about my behaviour in my entire career. People have made accusations and then hidden.”

Vilda was swift to reject suggestions that there were any parallels between him and his predecessor as coach, Ignacio Querejeda, who had been forced out in 2015 amid accusation of mistreatment of players. “If you knew anything you would not make that comparison,” he said. “Do not compare this situations, do not compare them.”

“I am hurt, deeply hurt. It is unjust, we do not deserve it, Spanish football does not deserve it. The greatest pain I feel is because of everything that we have done, the damage done to women’s football. And then because of interests, we have this mess. It’s not good for anyone it’s a ridiculo mundial [a farce that goes round the world]. We could feel proud of our national team and then this happens. My solution is to look ahead and I don’t see any other solution than these players I have chosen. I have to choose players who are committed to the national team and are convinced of our work and methods. This comes up, I don’t think it’s right and I don’t think it’s fair.”