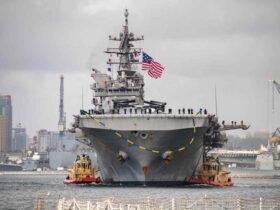 USS Tripoli, After Issue with Water Filtration, Cleared to Go to Sea

Outgoing Hawthorn president Jeff Kennett says the leaking of racism allegations at the AFL club is “unfair” and he hopes the issue can be resolved by the end of the year.

Kennett said on Saturday night the club was not in crisis and he described the serious allegations as a “bump along the highway”. Kennett was speaking at the club’s best and fairest awards function.

He told the audience he was “somewhat flabbergasted – and worse” when he read the draft report of the club’s internal cultural review examining the experiences of Indigenous players and their partners while at Hawthorn.

That report was handed to the AFL which said it would establish a four-person panel to look at the allegations.

Four-time Hawks premiership coach Alastair Clarkson was named in the review detailing historic allegations from some Indigenous players between 2010 and 2016.

The report recommended the findings of alleged “negligence and human rights abuses” towards First Nations players committed by Clarkson, then football manager Chris Fagan and development manager Jason Burt be reported to the AFL integrity unit.

Clarkson said on Wednesday the allegations were “false and deeply offensive” and those close to him knew “how important family is to me”. Fagan, now coaching Brisbane, has also categorically denied the allegations against him. Burt last week released a statement to “categorically deny the conduct attributed to me in the media”.

Clarkson’s friend and Richmond coach Damien Hardwick said at a function in Perth on Saturday that Clarkson was “not in a great place”.

The Age reported on Saturday that Clarkson was allegedly unsympathetic to Sam Mitchell – now Hawthorn’s senior coach – when he was a player dealing with family issues.

“I do not consider this to be a crisis,” Kennett said at the best and fairest awards.

“When I read the draft report … I was somewhat flabbergasted – and worse. It wasn’t a good read. I hope this matter can be resolved quickly by all parties involved.”

Kennett said the people interviewed for the report had requested confidentiality and Hawthorn respected that.

“Sadly, they made a decision to talk to the press … they named people with whom they had very real issues,” he said.

“That was unfair to those [people], so therefore we need to have this resolved. I don’t see this is as a crisis – I know this club, I know its history and I know its strength. We will deal with this and assist in any way we can.”

Kennett said the issues were historic and called on any Hawthorn employees to tell the club at the time if they believed there was inappropriate behaviour occurring.

“The one thing the investigation showed was that we have a safe cultural workplace now. So these are issues of the past,” he said.

Kennett said he hoped there could be some form of mediation so any issues could be resolved quickly.

“It could be resolved before the end of the year so people can get on with their lives,” he said.

At the end of his speech, Kennett insisted the Hawks would “overcome” the issue.

“Understand this as being a bump along the highway, but … it is an important bump and it has to be dealt with professionally,” he said.

“I will not accept the fact that we as a club cannot overcome this latest issue. We have the people, we have the desire and we have that indelible ingredient which is togetherness.”

Hardwick was speaking at a function before the Wafl grand final on Saturday.

“He’s not in a great place, let’s be perfectly honest,” Hardwick said of Clarkson.

“To have that accusation and alleged incidents thrown at you and then splashed across the media when you don’t have an opportunity to defend yourself is incredibly disheartening and probably a little bit distasteful.”

Mitchell did not refer to the latest allegations against Clarkson involving him or the racism claims in his speech at the Hawthorn best and fairest count.

The Hawthorn football club was advised to provide monetary compensation and issue a public apology to First Nations players and families affected by alleged “bullying and intimidation” at the AFL club.

The call for a “restitution package” was one of seven recommendations in the internally commissioned report published by the Herald Sun on Wednesday.

The review stated that the research team considered some of the experiences to be “such serious allegations of abuse, racial vilification and bullying to amount to human rights abuses which require immediate mandatory reporting”.