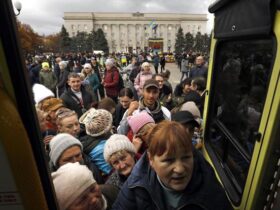 Ukraine’s Newly Liberated Residents Wonder: Who Collaborated with the Russians?

Bukayo Saka has a quick word with Channel 4. “We’ve come in pretty positive. The future is more important than the past. We can’t control the past any more. These games are very important, the last two before the World Cup, so we really want to win both of them. That’s our mentality.”

Italy have three players who are one booking away from missing next week’s game in Hungary: Bryan Cristante, Nicolò Barella and Alessandro Bastoni.

England have five players who will miss the visit of Germany should they see yellow this evening: Kyle Walker, Reece James, Harry Maguire, Jack Grealish and James Ward-Prowse.

Both teams are coming off the back of a hiding – England defeated 4-0 by Hungary, Italy spanked 5-2 in Germany – so there are plenty of changes. Gareth Southgate makes six, with Eric Dier picking up his first cap since November 2020, Harry Maguire returning despite not starting any of Manchester United’s last four Premier League matches, Nick Pope standing in for the injured Jordan Pickford, and Declan Rice, Raheem Sterling and Phil Foden also starting. Roberto Mancini makes seven changes, with Chelsea midfielder Jorginho returning, and West Ham striker Gianluca Scamacca taking the place of the injured Ciro Immobile.

… so, well, y’know. In fact, England are on a skid of four matches without a win, having made an awful mess of Nations League Group A3 so far. Home and away losses against Hungary, a fortunate draw in Germany, and some goalless tedium in Wolverhampton against Italy have rooted Gareth Southgate’s side to the bottom of the table. If they lose at San Siro tonight, they’ll be cashiered from the top tier with extreme prejudice. In other words, it’s gameface time. Kick off is at 7.45pm BST. It’s on!