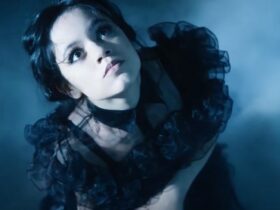 That Viral Dance From Netflix Megahit ‘Wednesday’ Is Taking Over TikTok

Any opinions expressed are those of the author, and do not necessarily reflect the views of Iraq Business News.

The market, as measured the Rabee Securities RSISX USD Index, was up 2.1% for the month, and up 1.2% for the year – a year-to-date performance that is now well ahead of most global benchmarks.

July’s subdued economic activity was even more subdued throughout August with the start, in the second week of the month, of the 40-day Arbaeen pilgrimage – among the world’s largest annual pilgrimages, with official figures showing about 16.3 mn pilgrims took part throughout the 40 days of the pilgrimage in 2021.

The pilgrimage climaxes at the end of the 40-day mourning period (Arbaeen in Arabic) of the death of Prophet Muhammad’s grandson, Imam Hussein. Leading to the climax, millions of pilgrims – with about two thirds from Iraq, and a third from Iran, Lebanon, the Gulf states, Pakistan, India, the U.K., and the U.S. – walk to Karbala from across Iraq.

Famed Iraqi hospitality is in full swing throughout the period as residents along the pilgrimage’s many routes to Karbala, and especially in Karbala itself, open their homes to the visiting pilgrims providing them with shelter and food, as documented in a BBC story in 2017. Some stunning scenes of the pilgrimage can be seen in a 2020 piece by a New York Times photojournalist. 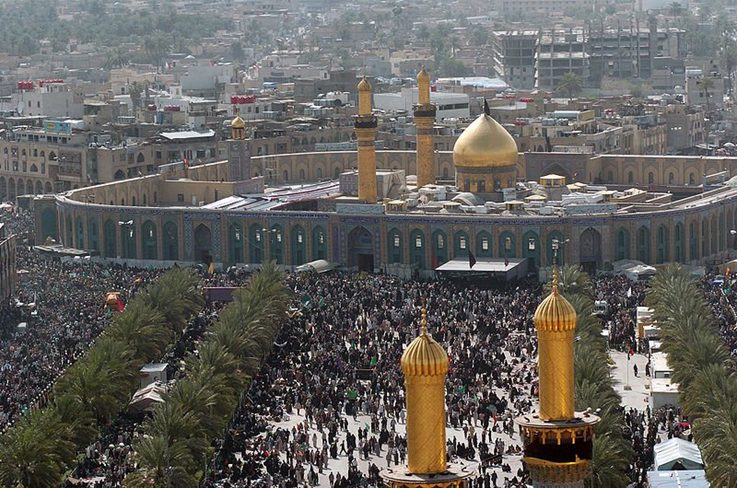 As discussed here over the last few months, the market’s technical picture continues to be positive, as the RSISX USD Index is within its two-year up-trending channel (chart below) – an uptrend that ended a brutal multi-year bear market. The macroeconomic fundamentals discussed here four months ago argue that the market’s uptrend will likely remain in force, however, its upward slope might moderate, or even go sideways, as the liquidity injection – as a consequence of the passage of the supplementary budget – works its way through the economy and eventually into the equity market. The significance of the passage of the supplementary budget to the economy, and the transformative impact of the higher oil price environment on Iraq, were discussed here in “Supplementary Budget Stabilises the Market“. 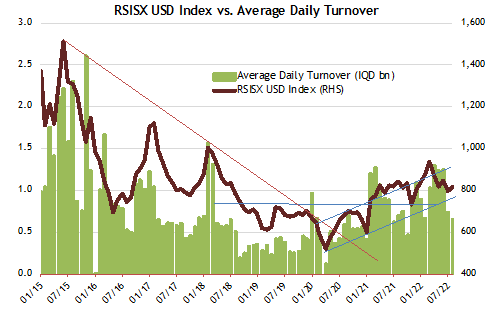 Political Stalemate Erupts into Civil War, or Does it?

The 10-month political impasse over government formation, as a consequence of the surprising results of the October 2021 parliamentary elections, deteriorated sharply at the end of the month. Unlike last month, the melodrama of the occupation of parliament by the supporters of the Sadrist Movement (the apparent winners of the elections), and the counter-demonstration by their opponents, the supporters of the Coordination Framework (the apparent losers of the elections), evolved beyond the theatrics of street demonstrations into a night of intense armed conflict in Baghdad’s Green Zone. The fighting on the night of 29th-30th August revived Baghdadis’ worst memories of the civil war of 2006-2008 that almost tore the city apart.

The conflict as ugly, as terrifying, and as real as it was, with its epicentre in Baghdad’s Green Zone was nevertheless an unlikely epicentre for the much feared and anticipated war between the two opposing sides. The Green Zone, apart from the presence of the two opposing demonstrators over the last few weeks, does not house either party of the conflict, and as such only a fraction of the militias of either side took part in the conflict, with some heading to it from strongholds elsewhere in Baghdad. However, as the seat of the government and the location of most of the foreign missions, its choice for staging an armed clash is symbolic, highly visible, and crucially draws attention to the potential costs of a failure to reach an agreement over the 10-month impasse over government formation.

Moreover, the high probability of a violent clash in the Green Zone was telegraphed three-days earlier through social media, stating that a failure to meet the latest demands of the leader of the Sadrist Movement, would lead to his withdrawal from politics and allowing the movement’s followers the freedom to follow through with their demonstrations as they saw fit without the earlier constraints imposed on them to avoid violent clashes.

The conflict ended the next day, following a speech by the leader of the Sadrist Movement instructing the movement’s followers to withdraw from the Green Zone. That was quickly followed by a series of synchronized conciliatory statements from most, but not all, of the political leaders of the Coordination Framework, heads of other political parties, as well as by the holders of the highest offices in the government, that hailed the withdrawal and called for new national dialogue to resolve the conflict. Shortly afterwards, almost like clockwork, the government, ended a curfew imposed earlier, removed road barriers and blocks, and life swiftly returned to normal in Baghdad.

As discussed here last month, both parties in the conflict, irrespective of their fierce rivalry, have been members of the all-inclusive governments formed following successive elections post the US invasion in 2003. Importantly, as major players in the post-2003 ethno-sectarian political system, both parties have built substantial patronage networks, and consequently could risk the loss of the wealth and sources of economic rent created by these networks, if their conflict evolved into a civil war.

Following through with this argument, it is logical to conclude that the contours of a re-negotiation of the post-2003 elite bargain is taking place, that ended the clashes, involving a degree of a redistribution of power and re-allocation of resources to accommodate the increased relative strength of the Sadrist Movement. However, the less than conciliatory statements by some of the leaders of the Coordination Framework, indicates that they are likely to have been losers in any re-negotiated elite bargain, and as such the political impasse is hardly over with likely negative surprises in the offering – but highly improbable to be anywhere as violent as the just ended clash.

This implies a continuation of the status-quo, despite the continued political uncertainty, would be a preferred solution for all political parties, as it would preserve the country’s ethno-sectarian parties’ share of the state’s resources achieved in the 2018 elections, while they work on the torturous process of modifying the elite bargain to accommodate the dissenting parties.

Markets Discount and Look Through the Violent Conflict

The market was down for most of the month, with the Rabee Securities RSISX USD Index down as much as 5.0% for the month by the start of the third week of August; but it turned around as the month came to an end, ending up 2.1% – with some of the best daily gains happening in the three days following the telegraphing of the imminent conflict (above). This discounting and looking through the violent conflict were repeated in the currency market of exchange rate of the Iraqi Dinar (IQD) versus the USD. The spread between the official exchange rate and the parallel market exchange rate (delta in chart below), narrowed significantly throughout the month – with the sharpest decline taking place in the days following the storming of parliament late last month. 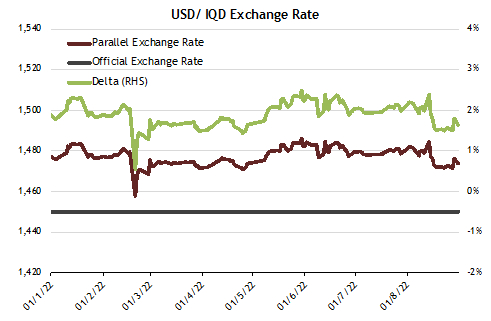 While, a few days of positive market action, in both the stock and currency markets, are not sufficient to make a firm conclusion, yet they imply that the markets are discounting events along the logic proposed above and discussed here over the last few months.

The political uncertainty will continue to dampen foreign interest in Iraq’s equity market until the resolution of the political impasse; yet Iraq’s value proposition is compelling as its economy is a huge beneficiary of the high crude oil price environment, while its equity market is in the very early stages of emerging from a multi-year bear market – and as such its risk-reward profile is very attractive against most global markets.

Mr Tabaqchali (@AMTabaqchali) is the Chief Strategist of the AFC Iraq Fund, and is an experienced capital markets professional with over 25 years’ experience in US and MENA markets. He is a Visiting Fellow at the LSE Middle East Centre, Senior Fellow at the Institute of Regional and International Studies (IRIS), and a Senior Non-resident Fellow at the Atlantic Council. He is also a board member of Capital Investments, the investment banking arm of Capital Bank in Jordan.

His comments, opinions and analyses are personal views and are intended to be for informational purposes and general interest only and should not be construed as individual investment advice or a recommendation or solicitation to buy, sell or hold any fund or security or to adopt any investment strategy. It does not constitute legal or tax or investment advice. The information provided in this material is compiled from sources that are believed to be reliable, but no guarantee is made of its correctness, is rendered as at publication date and may change without notice and it is not intended as a complete analysis of every material fact regarding Iraq, the region, market or investment.