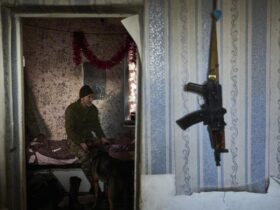 Ukraine President Back in Kyiv, Russia Keeps Up Attacks

India was still a British colony when Queen Elizabeth II was born in 1926, but it had been independent for nearly five years by the time she became Britain’s monarch in February 1952.

Britain at that time, though less powerful than in the heyday of the Empire, was still a major world power. India was just starting out.

How things have changed.

Elizabeth’s death at the age of 96 is likely only to add to debates in Britain about how to remain relevant in the world as it retreats from Europe post-Brexit.

India, meanwhile, aspires to become a world power on the back of its growing economy and youthful population. Close to half of India’s nearly 1.3 billion people are under the age of 25; many hadn’t even been born when the Queen made her third, and final, visit to India in 1997.

At an official level, India has been quick to pay its respects to the Queen – Prime Minister Narendra Modi has offered his condolences to Britain and his government declared Sunday a day of mourning.

But for many among the Indian public, her death is little more than a distant foreign news story – highlighting just how deeply Britain’s relationship with India, once the jewel in the Empire, has changed over the past 70 years.

To be sure, among the G20 countries, the United Kingdom remains one of the largest investors in India with British companies employing close to 800,000 people in the country, according to a 2017 report, and bilateral relations remain strong.

But while British leaders often cite trade with India as an opportunity in the post-Brexit world, Indian leaders devote more energy to building ties with new partners.

When Theresa May became Prime Minister in 2016, she came to India on her first bilateral visit outside Europe, bringing a large trade delegation to drum up business for Britain in the aftermath of the Brexit referendum. And Boris Johnson planned to visit the country in April 2021 – in what would have been his first trip to Asia since becoming Prime Minister in 2019 – but was forced to cancel after Covid-19 cases in India soared. He later visited in 2022.

In contrast, India’s leader, Narendra Modi, visited more than 25 countries, among them resource-rich Turkmenistan, before finally making it to the UK in 2015.

Which makes sense: back in 2000, Britain’s economy was more than three times the size of India’s. By 2019, India had surpassed Britain in the rankings, according to World Bank figures.

Meanwhile, British leaders often talk about “the links of the past, ties of history, language and culture” between the two countries – that’s from a 2013 speech by then-British Prime Minister David Cameron.

But many Indians are far more concerned with the future. Take the idea of the Commonwealth, so often invoked by ardent Brexiteers as an alternative to the EU. In India, the grouping is hardly ever talked about.

Case in point: the 2018 Commonwealth heads of government meeting in London, when Prince Charles was named as the Queen’s successor as the body’s ceremonial head. Modi was there. But the headlines in India weren’t about the goings-on at the summit. No. The focus was on Modi’s outing at a public event with the Indian diaspora in central London and bilateral meetings with his opposite number at Number 10.

Why? Because in an increasingly young and forward-looking India, these “links of the past” are seen, when they are remembered at all, very differently.

In the wake of the Queen’s passing, multiple young people who spoke to CNN in India’s capital New Delhi said they associated the monarchy with a colonial past that was marked by violence.

“If you don’t see people mourning the death of Queen Elizabeth in India, (it is) because she doesn’t have that connection with the new generation of Indians,” Ravi Mishra said.

“She was in a position of power for 70 years when she could have done a lot. You know, all the bad that the British did to this country and to the other countries around the world. She did nothing.”

Sandeep Gandotra said the British “took everything from India.”

“As Queen of Britain, she might have left some legacy for (Britons), not for India,” he said.

A point of contention for many Indians is the monarchy’s continued possession of one of the world’s most famous gems, the 105.6 carat Koh-i-Noor diamond.

The diamond was unearthed in central southern India and passed through the possession of Indian princes and kings before ending up in British hands in 1849.

“The diamond should have come back to India a long time ago,” Mishra said. “But we all know … the Queen didn’t do anything, so I’m not surprised that it is not coming back to the country.”

“A huge treasure has been taken away. I think our current leader is actually making an effort to get it back to India. I will be the first one to clap and rise and celebrate,” she said.

And one of the most successful non-fiction books in recent years in India was called “An Era of Darkness: The British Empire in India.” (Its title, when it was published in the UK, was “Inglorious Empire: What the British Did to India.”) Written by the Indian writer and Congress Party politician Shashi Tharoor, it tells the story of how Britain’s plunder of India fueled its rise.

The book followed a speech Tharoor gave during an Oxford Union debate in 2015 – arguing for the motion that “Britain Owes Reparations to Her Former Colonies” – that went viral, with at last count more than 9.6 million views on YouTube. Importantly, Tharoor wasn’t arguing for a particular monetary sum.

“We are not arguing specifically that vast sums of money need to be paid. The proposition before this house is the principle of owing reparations … the question is: is there a debt?… As far as I’m concerned, the ability to acknowledge a wrong that has been done, to simply say sorry, will go a far, far, far longer way than some percentage of GDP in the form of aid,” Tharoor said.

He added: “Personally, I’d be quite happy if it was one pound a year for the next 200 years after the last 200 years of Britain and India.”