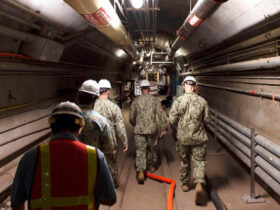 Navy: No Drinking Water Fouled by Spill of Firefighting Foam

We will meet again: at the Khalifa International Stadium, Doha in eight weeks’ time as a matter of fact. In the meantime, if this really is to be a final trip to Wembley for Gareth Southgate as England manager then it was at least a fun, loose, slightly wild Nations League dead rubber 3-3 draw, a match that sprung up off the gurney in the most unexpected fashion.

At times in the first half at Wembley it felt as though 79,000 people had accidentally wandered into the same stadium and were now stoically seeing it out. For 49 minutes almost nothing happened. Then suddenly everything happened, all the things, a kind of tantrum of football.

Still, for all the demob happy stuff, there were two elements of clarity.

Notes of life, and notes of warning. Which of these will Southgate listen to?

The good bits were obvious enough. Bukayo Saka and Mason Mount came on with 25 minutes to go and changed not just the game, but the vibes, the energy, the smell of Late Gareth. Mount scored a brilliant goal and played with some real anger. Saka was electric on the right, a magnet for the ball, touch so sure, so relentless in his search for angles, weakness, ways past.

The story here will be that revival from 2-0 down. But for Southgate, who talks always about performances and underlying metrics, it must also be the process that took them there, and a display of terribly poignant, terribly muddled defending by Harry Maguire. When do warning signs stop being warning signs and just become things, bad things happening? Southgate spoke after about not being “wishy-washy”, not reacting to “noises”. But loyalty is also the easier path sometimes.

It began on 50 minutes. Maguire made the moment, taking a loose ball and passing it straight to a German player, counter‑pressing himself. Even worse, that player was Jamal Musiala, who had tortured Maguire in the opening Nations League fixture between these two teams.

Frankly this is just not what you want if you’re Harry, a whirl of feints and jinks and perfect balance, with a way of swaying low to the ground like a Moto GP rider taking a bend, a footballer who just seems to be moving through thinner air.

For Maguire, who is mortal in this company, whose qualities do not extend to elite athletic agility, who is essentially a bloke, these moments are increasingly a mismatch. He stepped out to face this danger, standing front on, feet planted, like a wardrobe left at the turn in the stairs.

And, of course, Musiala was too quick, switching the ball to his left side as Maguire swung his right foot gamely at the last reported sighting. It wasn’t a tackle, just a kick to the shin. The Dutch referee somehow didn’t give a penalty, but the VAR did instantly.

This doesn’t have to be a negative. There is information here. That information is: Maguire, right now, isn’t fit or ready or able to perform at this level. He may find that form in training. But there is something else here. The world seems to have been pushing for an exit, and wondering what that exit might look like, what will its form be, Southgate’s Norway, his fake‑sheikh, his brolly? Will it in fact be Big H?

Southgate and Maguire. It is a strange kind of two‑hander, a strange kind of interdependence. Maguire has been good to Southgate, a fixed point in the best times, a tournament warrior. Southgate has been even better for Maguire, awarding him all of his 47 caps giving him a stage, a persona, an aura,and basically getting him that move to Manchester United too. Maguire’s first appearance in Russia was his sixth for England. By the end he was a piece of the nation’s World Cup scroll, a meme, a fixture, a man elevated to a different trajectory. England has been his career in many ways.

But is it really? Ten minutes after that goal Maguire was left whirling around on his back, making a snow-angel in the Wembley turf as Musiala again swerved past. And shortly after Maguire was down again, collapsing like a venerable old Anglo Saxon wall, tackled by Kai Havertz, who then strode away and scored at the other end. “We’ve got to focus on our best players,” Southgate said, once again at the end. “Unless that situation becomes untenable.” Define “untenable”.

Southgate had done the right thing with his selection here. This is not the time to be “finding out” about fringe players. This is the time to try to make this thing feel like a team. Five of 10 outfield starters were original Gareth stock, class of 2018. Loyalty is good, until it stops being good. And there is still time to change this story. It seems ever more unlikely. But if Southgate really does plan to be ruthless, as he has suggested, he will surely need to start with one of his closest generals.