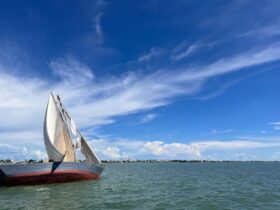 Max Verstappen has been absolutely dominant this season. The Red Bull superstar has won four consecutive races and is well on his way to his second consecutive championship. In order to wrap up the championship in Singapore, he’ll need to win the race with the fastest lap and have Ferrari’s Charles Leclerc finish eighth or lower, as well as have his teammate Sergio Perez finish fourth or lower. While there are other ways he can clinch it in Singapore, it’s more likely he does so in Japan. Ultimately, he needs to extend his lead in the Drivers’ Championship standings to 138 points over his nearest competitor this weekend. Currently, he sits 109 points ahead of both Perez and Leclerc. Red Bull also leads Ferrari and Mercedes in the Constructors’ Championship.

Those looking to follow all the drama will need access to ABC, ESPN, ESPN 2 and ESPNews to catch every second of the action all season long. The entire race weekend, including practice sessions and qualifying, will be shown in the US on ESPN’s family of television networks.

No single provider has exclusive rights to the network, so there are plenty of ways to get ESPN and watch the races without cable. We’ve broken down everything you need to know in order to stream today’s race, and all the other F1 races this season.

What is F1 and how is it different from IndyCar?

Both IndyCar and F1 are open-wheeled, single-seater racing formats. This means that the cars can only fit one person and have uncovered wheels that protrude from the body of the vehicle. Despite their basic similarities, F1 and IndyCar offer very different experiences.

In F1, there are only 10 teams, with two drivers apiece for a total of 20 drivers. Most races must go for 305 km, which is about 190 miles. Each driver needs to use two different tires in the race, so a pit stop is mandatory, though cars are not allowed to refuel. Races average around two hours in length and are held at venues all over the world.

Teams spend hundreds of millions of dollars each year developing their cars. All cars must have certain elements — for example, gearboxes must have eight gears plus a reverse and last for six consecutive races — but teams have leeway to tweak and change some parts of their car, including their engines, in the pursuit of speed.

In contrast, the cars featured in IndyCar are more standardized. They all have the same aerodynamic kit and chassis and can only be powered by one of two engines — either a Honda or a Chevrolet. That said, teams are allowed to develop some of their own parts, like dampers and some of their suspensions.

IndyCar races occur on a wide range of tracks, from fast ovals to road and street courses. The length of the races also varies, with some, like the Indianapolis 500, lasting 500 laps and taking over three hours to complete. Not surprisingly, refueling during pit stops is a big part of the strategy during IndyCar races. Teams can field more than two cars, meaning that the amount of drivers on the grid fluctuates from race to race.

IndyCar is mostly considered an American sport and does not have the same level of money and glamour associated with it compared to the globe-hopping F1 circuit.

Why should I care about F1?

F1 races might best be described as a sort of action-packed chess match that takes place while drivers are throttling around a track at close to 200 mph. Teams need both strategy and skill to compete against some of the best minds in motorsports.

F1 is also full of strong personalities. The Netflix documentary series F1: Drive to Survive follows many of the teams and drivers over the course of a year and has helped raise the profile of the sport in the US. Released in March, season four of the series chronicles last year’s tight championship race between rivals Verstappen and Hamilton. It also focuses on the internal battles between drivers on the same team, while giving viewers a peek into the tense, pressurized world of elite racing.

Does F1 stream on ESPN Plus?

ESPN does not air any F1 coverage on its ESPN Plus streaming service. If you want to watch the practices or races you will need a television provider of some kind or to pay for F1’s $80 per season TV Pro subscription.

When, where and what time are the races?

Races are held on Sunday and are usually spaced two weeks apart. Here’s the entire schedule, all times ET:

Best options for streaming without cable

Race weekends normally start on Friday with multiple practice runs and continue on Saturday with qualifying. The races themselves take place Sunday. ESPN typically airs practices and qualifying on a mix of ESPN 2 and ESPNews, while the races tend to air on ESPN. F1 events in North America often land on ABC.

Here are some of the best ways to catch the entire race weekend without cable.

You can catch the entire race weekend with a subscription to YouTube TV. ABC, ESPN, ESPN 2 and ESPNews are all included in the package, which means you’ll have all the channels you need in order to watch every second of the action.

Hulu Plus Live TV is a little more expensive than YouTube TV, but it also offers all the channels you need to watch every second of race weekend. As an added bonus, Hulu Plus Live TV comes with the rest of the Disney Bundle, which includes a subscription to Disney Plus, as well as ESPN Plus. F1 races don’t air on ESPN Plus, but the service offers a ton of other content for die-hard sports fans.

Sling TV’s $35 Orange plan might be a good choice for F1 fans who are primarily looking to just watch the races on Sundays. This plan is one of the cheapest ways to get access to ESPN and ESPN 2. Those looking for ESPNews will have to opt for the $11 Sports Extra ad-on. Sling TV lacks ABC, which could be a problem for fans hoping to catch the F1 races in North America.

FuboTV costs $70 per month and includes ABC, ESPN and ESPN 2. The base package lacks ESPNews, but you can add it for an extra $8 a month with the Fubo Extra Package or pay for the $80-a-month Elite streaming tier that includes Fubo Extra. Check out which local networks FuboTV offers here.

DirecTV Stream is the most expensive live TV streaming service. Its cheapest, $70-a-month Plus package includes ESPN, ESPN 2 and ABC, but you’ll need to move up to the $90-a-month Choice plan to get ESPNews. You can use its channel lookup tool to see which local channels are available in your area.

For gearheads looking to get every angle on the action, F1 offers its own streaming service. F1 TV Pro costs $80 per season and gives fans access to all races from F1, F2, F3 and Porsche Supercup. You’ll be able to livestream every track session from all F1 grand prix and have access to all driver onboard cameras and team radios. You’ll also be able to watch full on-demand races, replays and highlights, along with F1’s historic race archive.

F1 also offers a TV Access Plan for $27 per year, which only gives you on-demand access to races once they have been completed. Users will still be able to view all F1 onboard cameras, along with full replays of F1, F2, F3 and Porsche Supercup. It also includes the historic race archive.