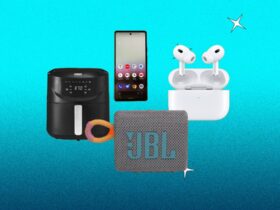 She’s got more than 130,000 followers on Instagram, where she posts photos of her globetrotting adventures. Her makeup is always impeccable, her clothes look straight off the runway. She sings, dances and models — and none of it is real.

Rozy is a South Korean “virtual influencer,” a digitally rendered human so realistic she is often mistaken for flesh and blood.

“Are you a real person?” one of her Instagram fans asks. “Are you an AI? Or a robot?”

According to the Seoul-based company that created her, Rozy is a blend of all three who straddles the real and virtual worlds.

She is “able to do everything that humans cannot … in the most human-like form,” Sidus Studio X says on its website.

That includes raking in profits for the company in the multibillion-dollar advertising and entertainment worlds.

Since her launch in 2020, Rozy has landed brand deals and sponsorships, strutted the runway in virtual fashion shows and even released two singles.

And she’s not alone.

The “virtual human” industry is booming, and with it a whole new economy in which the influencers of the future are never-aging, scandal-free and digitally flawless — sparking alarm among some in a country already obsessed with unobtainable beauty standards.

The CGI (computer-generated imagery) technology behind Rozy isn’t new. It is ubiquitous in today’s entertainment industry, where artists use it to craft realistic nonhuman characters in movies, computer games and music videos.

But it has only recently been used to make influencers.

Sometimes, Sidus Studio X creates an image of Rozy from head to toe using the technology, an approach that works well for her Instagram images. Other times it superimposes her head onto the body of a human model — when she models clothing, for instance.

Like their real-life counterparts, virtual influencers build a following through social media, where they post snapshots of their “lives” and interact with their fans. Rozy’s account shows her “traveling” to Singapore and enjoying a glass of wine on a rooftop while her fans compliment her outfits.

Older generations might consider interacting with an artificial person somewhat odd. But experts say virtual influencers have struck a chord with younger Koreans, digital natives who spend much of their lives online.

Lee Na-kyoung, a 23-year-old living in Incheon, began following Rozy about two years ago thinking she was a real person.

Rozy followed her back, sometimes commenting on her posts, and a virtual friendship blossomed — one that has endured even after Lee found out the truth.

“We communicated like friends and I felt comfortable with her — so I don’t think of her as an AI but a real friend,” Lee said.

“I love Rozy’s content,” Lee added. “She’s so pretty that I can’t believe she’s an AI.”

“Many big companies in Korea want to use Rozy as a model,” said Baik Seung-yup, the CEO of Sidus Studio X. “This year, we expect to easily reach over two billion Korean won (about $1.52 million) in profit, just with Rozy.”

He added that as Rozy grew more popular, the company landed more sponsorships from luxury brands such as Chanel and Hermes, as well as magazines and other media companies. Her ads have now appeared on television, and even in offline spaces like billboards and the sides of buses.

Lotte expects similar profits this year from Lucy, who has brought in advertising offers from financial and construction companies, according to Lee Bo-hyun, the director of Lotte Home Shopping’s media business division.

The models are in high demand because they help brands reach younger consumers, experts say. Rozy’s clients include a life insurance firm and a bank — companies typically seen as old-fashioned. “But they say their image has become very young after working with Rozy,” Baik said.

It also helps that, compared to some of their real-life counterparts, these new stars are low-maintenance.

It takes Lotte and Sidus Studio X between a few hours and a couple of days to create an image of their stars, and from two days to a few weeks for a video commercial. That’s far less time and labor than is required to produce a commercial featuring real humans — where weeks or months can be spent location scouting and preparing logistics such as lighting, hair and makeup, styling, catering and post-production editing.

Lotte decided on a virtual influencer when considering how to maximize its “show hosts,” said Lee.

Lotte Home Shopping hires human hosts to advertise products on TV — but they “cost quite a lot,” and “there will be changes when they age,” Lee said. So, they came up with Lucy, who is “forever 29 years old.”

“Lucy is not limited to time or space,” he added. “She can appear anywhere. And there are no moral issues.”

A question about beauty

South Korea isn’t the only place to have embraced virtual influencers.

But there’s one major difference, according to Lee Eun-hee, a professor at Inha University’s Department of Consumer Science: virtual influencers in other countries tend to reflect a diversity of ethnic backgrounds and beauty ideals.

Virtual humans elsewhere have a “uniqueness,” while “those in Korea are always made beautiful and pretty … (reflecting) the values of each country,” she added.

And in South Korea — often dubbed the “plastic surgery capital of the world” for its booming $10.7 billion industry — there are concerns that virtual influencers could further fuel unrealistic beauty standards.
Younger Koreans have begun pushing back against these ideals in recent years, sparking a movement in 2018 dubbed “escaping the corset.”

But ideas of what is popularly considered beautiful in the country remain narrow; for women, this usually means a petite figure with large eyes, a small face and pale, clear skin.

And these features are shared by most of the country’s virtual influencers; Lucy has perfect skin, long glossy hair, a slender jaw and a perky nose. Rozy has full lips, long legs and a flat stomach peeking out under her crop tops.

Lee Eun-hee warned that virtual influencers like Rozy and Lucy could be making Korea’s already demanding beauty standards even more unattainable — and heightening the demand for plastic surgery or cosmetic products among women seeking to emulate them.

“Real women want to become like them, and men want to date people of the same appearance,” she said.

The creators of Rozy and Lucy reject such criticism.

Lotte representative Lee Bo-hyun said they had tried to make Lucy more than just a “pretty image” by crafting an elaborate back story and personality. She studied industrial design, and works in car design. She posts about her job and interests, such as her love for animals and kimbap — rice rolls wrapped in seaweed. In this way, “Lucy is striving to have a good influence in society,” Lee said, adding: “She’s giving a message to the public to ‘do what you want to do according to your beliefs.'”

Baik, the Sidus Studio X CEO, said Rozy isn’t what “anyone would call beautiful” and that the firm had deliberately tried to make her appearance unique and veer away from traditional Korean norms. He pointed to the freckles on her cheeks and her wide-set eyes.

“Rozy shows people the importance of inner confidence,” he added. “There are other virtual humans that are so pretty … but I made Rozy to show that you can still be beautiful (even without a conventionally attractive face).”

But concerns go beyond Korean beauty standards. Elsewhere in the world there is debate over the ethics of marketing products to consumers who don’t realize the models aren’t human, as well as the risk of cultural appropriation when creating influencers of different ethnicities — labeled by some as “digital blackface.“

Facebook and Instagram’s parent company Meta, which has more than 200 virtual influencers on its platforms, has acknowledged the risks.

“Like any disruptive technology, synthetic media has the potential for both good and harm. Issues of representation, cultural appropriation and expressive liberty are already a growing concern,” the company said in a blog post.

“To help brands navigate the ethical quandaries of this emerging medium and avoid potential hazards, (Meta) is working with partners to develop an ethical framework to guide the use of (virtual influencers).”

But one thing appears clear: the industry is here to stay. As interest in the digital world booms — ranging from the metaverse and virtual reality technologies to digital currencies — companies say virtual influencers are the next frontier.

Lotte is hoping Lucy will move from advertising to entertainment, perhaps by appearing in a television drama. The firm is also working on a virtual human that will appeal to shoppers in their 40s to 60s.

Sidus Studio X has big ambitions, too; Rozy will launch her own cosmetics brand in August, as well as an NFT (non-fungible token), and the firm hopes to create a virtual pop trio to take on the music charts.

Baik points out that most fans don’t meet real celebrities in person, only seeing them on screens. So “there is no big difference between virtual humans and the real-life celebrities they like,” he said.

“We want to change perceptions of how people think of virtual humans,” Baik added. “What we do isn’t to take away people’s jobs, but to do things that humans can’t do, such as work 24 hours or make unique content like walking in the sky.