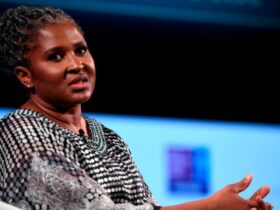 Serge Gnabry was on the pitch. They thought it was all over. With Germany 2-0 up at a sullen Wembley, Hansi Flick decided to kick back and roll out his substitutions. On came Gnabry, trying to play himself back into form after an indifferent start to the season with Bayern Munich. On came Robin Gosens, spying a chance to reclaim the left-back berth. But with 20 minutes to play, the prevailing sense was of a winding down, a gear shift, an opportunity to knock the ball around as the stands slowly emptied around them.

On this front, it’s fair to say things didn’t quite go to plan. Indeed, perhaps the clearest indication of the suffering Germany endured during those final 20 minutes came at full time. As the whistle blew, centre-backs Nico Schlotterbeck and Niklas Süle bent double, the weariest men on the pitch, having borne the brunt of a chastening late England assault. Kai Havertz’s equalising goal had salvaged a little solace from the jaws of catastrophe. But Germany’s body language told its own story: the basic dislocation of a team coming to the collective realisation that it does not know itself quite as well as it thought.

And so Flick’s team will travel to Oman for their pre-World Cup training camp on a run of just one win in seven games, and with far more questions than answers. An initial relief at the passing of the Joachim Löw era has given way to a certain self-reflexive doubt: the suspicion that the underlying problems in this side go deeper than its ageing coach.

None of these issues are terminal or unfixable. This remains a richly talented squad with champion footballers in every area of the pitch. But, right now, something appears to be missing. The old certainties – resilience, character, composure, defensive solidity, the ability to burgle a goal at the moment it is most required – no longer feel as certain as they did.

If a lack of coherence in attack has been the defining theme of Germany’s last few games, then here it was their brittleness at the back that was most concerning. Even before England’s comeback there were frequent opportunities on the counter. Raheem Sterling had two good chances in the first half. And on the occasions England were able to play through the press, there was abundant space for them to run into: space that more often than not had been vacated by Joshua Kimmich.

There has been a rumbling debate in Germany over recent weeks about Kimmich’s role in midfield, not just with the national team but with Bayern. His gifts are self-evident: a superb passing range, speed of thought, a preternatural reading of the game. What is less clear is how best to use them. Philipp Lahm recently observed that Kimmich’s gradual migration into a more attacking player has blurred some of his defensive responsibilities. “What is crucial,” Lahm said, “is that the roles must be clearly assigned. I don’t see that at the moment. I don’t currently understand his role.”

In recent games Kimmich has been deployed alongside Ilkay Gündogan, also a roaming, marauding sort of midfielder. When it works, it works extremely well: Kimmich receiving the ball from the defence and setting Gündogan off with a searing diagonal pass. But there were moments of confusion here, times when it was unclear who would go forward and who would cover, times when they both pushed high and left gaps behind them. Leon Goretzka, Kimmich’s Bayern colleague and a more natural covering player, might solve the issue. But Flick seems to prefer the versatility of Gündogan, his ability to make late runs into the box, an insurance policy in a team not blessed with natural goalscorers.

In a sense this encapsulates Flick’s dilemma: cover up one flaw and another one appears, like one of those sliding square games. Force Kimmich to sit deeper and you lose a creative presence further up the field. Bring the defensive line up and you leave yourself vulnerable to pace. Meanwhile the introduction of Timo Werner in the second half bolstered Germany’s press, but he also missed two good chances. And while the return of Antonio Rüdiger will shore up the defence, Flick still has issues to solve at full-back, where neither Thilo Kehrer nor David Raum has made an unanswerable case.

This is, of course, a wildly open World Cup. But it is hard to recall a Germany tournament side with quite so many problem areas, with so little sense of its own capabilities. Was this an insipid collapse or a bracing comeback? Is this a team on the cusp of coming together or on the verge of falling apart? Not until Qatar, you feel, will we truly know the answer.