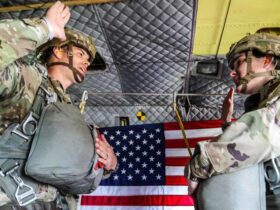 The Army is Having No Issue Retaining Soldiers, Amid a Crisis Recruiting New Ones

Dutch cyclist Mathieu van der Poel will appeal a court conviction for assaulting two teenage girls in a Sydney hotel on Saturday, according to his lawyer.

Van der Poel pleaded guilty on Monday to two counts of common assault, and was convicted and fined $AUS 1,500 ($967), according to his lawyer.

The 27-year-old had been preparing for the men’s world championship road race on Sunday when he was involved in a verbal altercation with two girls aged 13 and 14, according to New South Wales Police.

“It’s further alleged the man then pushed both teenagers, with one falling to the ground and the other being pushed into a wall causing a minor graze to her elbow,” a police statement read.

Van der Poel says the pair had been knocking on his door before running away late in the evening, according to Reuters.

Bowe added that in New South Wales you can plead guilty to an offense, but may not be convicted, though that didn’t happen in Van der Poel’s case.

“We went through the relevant events that occurred, he was arrested by police, was interviewed by police and said certain things to the police,” Bowe told Reuters.

“Mathieu agreed with some of those allegations. On discussing it was agreed he should plead guilty. In Australia, if you plead guilty you can walk away with no conviction … but it was not the case here.”

Van der Poel was able to retrieve his passport and has since left Australia.

His team, Alpecin-Deceuninck, says it will investigate the incident before determining future steps.

“Needless to mention everyone loses here, and we can only regret that. Initially, our focus was on providing legal assistance on site and on helping Mathieu van der Poel to return home quickly,” the team said in a statement to CNN.

“Now that has happened, we want to get a clear picture of the course of events.”

“We would like to emphasize that respect for others, inside and outside the peloton, is and always has been a core value of Alpecin-Deceuninck.

“That is why we want to follow up on this in an appropriate way. Only then will team Alpecin-Deceuninck and Mathieu van der Poel communicate about this again.”

CNN asked Alpecin-Deceuninck for comment on behalf of Van der Poel but was directed toward its official statement.

KNWU, the Dutch cycling team who he was representing during this weekend’s race, declined to comment.